How is climate change impacting on Scotland’s marine environment, infrastructure and industry?

Scotland’s marine environment accounts for over 60% of the UK’s total sea area, with approximately 48,000 km2 of coastal waters and 49 estuaries covering an area of approximately 1000 km2. Diverse and critical habitats within these areas means that it is estimated that Scotland's seas are among the most biologically productive in the world, supporting an estimated 6,500 species of animals and plants. Many of these are of significant regional or international importance for biodiversity conservation:

This natural resource is also hugely important in sustaining many jobs and industries. Nearly all of the UK marine finfish aquaculture industry is concentrated in Scotland and is dominated by the production of Atlantic salmon with an estimated value of £677 million (2013); the shellfish industry in Scotland is comprised largely of mussel farms producing approximately one quarter of the UK total; and about 60% of the UK’s commercial marine fish is landed in Scotland. Although fishing contributes a relatively small amount to the overall economy, in some regions of Scotland fishing is the mainstay of employment.

These changes in the physical characteristics of Scotland’s marine environment, will impact on biological diversity, associated marine industries and coastal infrastructure e.g.

Increases in the intensity and/or frequency of storms will potentially impact on the deployment of fishing vessels and time spent at sea, increase risk of damage to equipment, and reduce the catchability of target fish

The Scottish Government is “committed to a clean, healthy, safe, productive and biologically diverse marine and coastal environment that meets the long term needs of people and nature” and the Marine (Scotland) Act (2010) and the resulting National Marine Plan provides a framework which is intended to balance the competing demands on Scotland's seas. The National Marine Plan (published in March 2015), as well as considering how actions in the marine environment might help mitigate the degree of anthropogenic induced climate change, also considers the need for adaptation in order to take into account the effects of climate change. The core General Policies of the Plan, includes the need for decisions affecting the marine environment to include consideration of future climate change and provide effective adaptation strategies where appropriate. Regional Marine Planning Partnerships (with the first two for the Clyde and Shetland regions being set up in 2016) will also require the setting of regionally specific climate change objectives.

The Scottish Marine Protected Area (MPA) network forms part of the national strategy and covers approximately one fifth of Scotland’s seas. An extensive and well managed network of MPAs has the potential to protect important marine habitats and species, and by doing so ensure the continued delivery of benefits to the whole of Scotland’s marine environment, and continue to sustain marine industries and coastal communities. The MPA network provides:

However, as the changing climate (along with other drivers) will alter the composition of habitats and species within the designated areas, management strategy will need to ensure that the legislation is being implemented in a way that is adaptive to climate change e.g.

The wild capture fishing industry, is used to operating within the constraints of highly uncertain conditions of which climate change is just one. This uncertainty typically results in a forward view within the industry of no more than one year ahead. In order to encourage a more long-term view, partnership working is already improving scientific advice and data collection. However, it will be necessary to increase the long-term view particularly with regard to: risk management of ports and processing sites; governance of fisheries (at both domestic and international levels); and fleet wide vulnerability. Given the nature of the industry and the variation in resources among stakeholders it will be necessary to ensure that adaptation can be implemented within individual management processes as well as encouraging a general industry-wide adaptation framework.

Improvements to scientific advice and data collection from both research and industry sources will create a more robust knowledge base and enable strategic long term planning. The most comprehensive assessment of the implications of climate change for the UK’s marine and coastal waters is provided by the Marine Climate Change Impacts Partnership (MCCIP).  MCCIP provides a co-ordinating framework (within the UK as a whole) for the communication of evidence and advice to policy advisors and decision-makers. However, there remains some significant gaps in knowledge (see table) both across the UK as a whole and specifically for Scotland which limit the ability to implement informed and effective adaptation policies and measures, as well as limiting the ability to monitor climate change impacts in the marine environment and evaluate management responses. 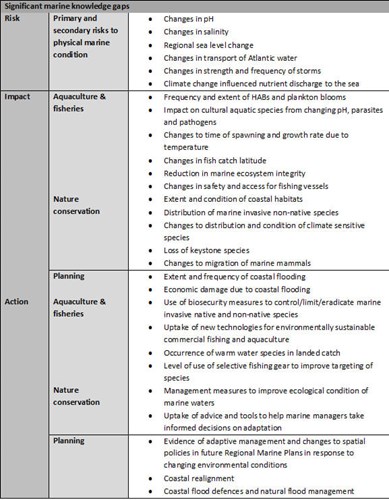 Mainstream the consideration of climate change when new legislation is developed or existing legislation updated.

CXC’s indicators focus on a number of aspects, for which appropriate and adequate data is available, of exposure and vulnerability of the marine environment and associated industries to climate change; critical resulting impacts; and highlight action to address these risks.

RISK due to changes in temperature and vulnerability of the marine environment to increased pressure due to climate change:

The IMPACT of changes in the occurrence, abundance and range of species and habitats of conservation interest; economically important or exploitable species; as well as potentially harmful species or events:

Management and industry ACTION to improve the resilience of the marine environment and associated industries:

NM46 Change in the latitudinal distribution of industry sectors in response to shifting optimal conditions for species specific growth: aquaculture will examine trends in the location of aquaculture sites over time in order to identify if the industry is adapting to climatic range shifts. Projected temperature rise is likely to expose some species in Scottish aquaculture facilities to temperatures beyond their thermal optima and an overall northward shift in site placement may be required for the industry to adapt and maintain viable stocks.

Coastal flooding events and their impact on the terrestrial built environment and infrastructure networks are captured by the narrative Flooding and Infrastructure and its associated indicators.

Climate change will impact on coastal habitats in a number of ways. Sea level rise and coastal erosion will cause inundation, more frequent and extensive flooding, alter the transport and deposition of sediments and saline intrusion - NB10b Extent of key semi-natural habitats: coastal habitats reports on the five coastal priority habitat types recognised by the UK Biodiversity Action Plan: 1) coastal sand dunes, 2) coastal saltmarsh, 3) coastal vegetated shingle, 4) maritime cliff and slopes, and 5) machair. The success of management of coastal and marine habitats and species of special interest is included in: NB19 Proportion of notified habitats and species in ‘positive’ condition. 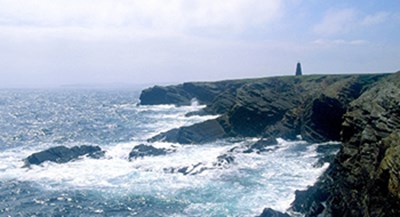