Long-term trend towards increase in area but with important shorter-term variability and geographic differences.

Medium confidence: there is good evidence to support the headline figures but further work is required to evaluate how this is modified by soil-climate interactions.

Land Capability identifies the flexibility of the land for different land uses and functions. Based upon the established Land Capability for Agriculture (LCA) system (Table 1 in methodology section), the best quality land for agriculture is defined as prime land (classes 1, 2, 3.1). It provides a good measure of the availability of high quality land for agricultural production, particularly arable land which may be linked to ‘food security’ issues.

LCA classification (Bibby et al., 2008) provides an objective and published method of determining the agricultural quality of the land resource of Scotland. It is based on the degree of limitation that climate, soil and topography impose on agricultural production and cropping flexibility. It is a seven class system with Classes 1, 2 and 3.1 being described as prime agricultural land by the Scottish Government. Prime land also receives a degree of protection from development within the Scottish planning system.

A key principle of LCA is the concept of flexibility of potential use; it does not determine actual use although there is a general good relationship between it and potential use. In this context, LCA provides a useful framework to examine how different sectors of Scottish agriculture might adapt to climate change; if the LCA of a specific location or region changes, then agricultural opportunities can increase or decrease dependent on the direction of change.

Climate, as expressed through accumulated temperature and potential soil moisture deficit[1], is a key variable and provides the overall context for the final classification; in a sense it can be viewed as the primary factor in the classification. Any change in climate will therefore impact on the LCA classification. Long-term averages (typically 20 years) are used for the general classification but they mask considerable inter-annual variability. Scotland has a growing food and drink industry and any change to agricultural capability, either positively or negatively, will impinge on this industry sector and ancillary activities such as supply chains.

Soil management is a key element of the land sector’s impact on climate change. It has the potential to both mitigate against climate change by maximising carbon storage, but also to release more carbon to the atmosphere, if management is inappropriate. Any expansion of arable cropping for example will increase the area under annual tillage which can increase carbon loss. Such a change may have a knock-on effect on the livestock sector.

NA1 Comparison of land capability against actual land use

The total amount of prime land has stabilised in the most recent reference period (1991-2010), although this masks small increases in east Scotland (notably north east Scotland) and small losses in south west Scotland (Figure 1). 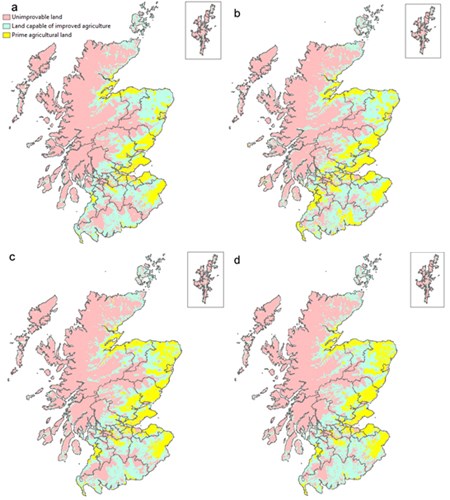 Analysis of past change has been made using reference periods back to 1961-1980.  Over this time period, the percentage of land in Scotland defined as prime land has increased by ca. 4% (this is ca. 18% expansion in prime land area excluding wetness risk)  but most of this expansion occurred during the period 1971-1990 and there have only been smaller changes since then (although with distinctive geographic variations).

Analysis using both UKCIP02 (Brown et al., 2008) and UKCP09 (Brown et al., 2011) indicate a significant expansion of prime land, identified as being in the range of 20-40% (Figure 2). This is mainly a consequence of the shift towards warmer drier summers for the lowland agricultural areas of Scotland (in average years) evident in most climate change projections or scenarios.

In general, the expansion in prime land is predominantly in east Scotland, covering areas adjacent to existing core areas for prime land. South west Scotland exhibits a more variable trend with gains and losses over recent decades, although most future projections suggest that the pattern will be a dominant gain by the 2050s. By contrast north west Scotland remains fundamentally limited from reaching prime status by intrinsic soil and topographic constraints (Brown et al., 2011).

Land capability is influenced both by temperature increases and soil moisture deficits (i.e. drier conditions) which in Scotland are both associated in general with improved agricultural productivity and flexibility of land use. Temperature increases act to extend the growing season whilst drier soils reduce wetness risks (NB. if soils become too dry then they are classified to be higher drought risk but this is assessed separately as it is crop-specific).

The increase in temperatures  over recent decades has improved land capability and the area of prime land but this has been complicated by changes in soil moisture deficits (linked to summer precipitation) which have been more variable (spatially and temporally).

In the future, the likely trend towards warmer drier summers (on average) shown by most climate projections means that a large expansion of prime agricultural land is anticipated. However this may be modified by an increased drought risk (see ‘NA29 Drought risk to agricultural land’ indicator).

In addition to decadal variability, inter-annual variability is also a major influence on land capability and there is some evidence that some areas have experienced increased variability in yearly conditions, notably in SW Scotland (see Brown et al., 2014). This is currently not included in the indicator

The metrics should be considered in combination with other aspects of land capability, notably drought risk and wetness risk, which may cause a downgrading of prime land status, also depending on adaptation assumptions made for irrigation and drainage respectively.

Other indicators, such as the area of land that may be potentially improved for agriculture, are also available. They show similar overall trends but with different spatial variations that can be important for land use options in some regions.

The following issues should also be noted:

Notwithstanding these caveats, LCA does provide a robust and straightforward way of assessing the inherent quality of land for agriculture and how agriculture might adapt in a changing climate. The data presented here is best applied at the national and regional levels and has been in a number of previous applications. The system was published in 1982 and the mapped output shortly afterwards; both are viewed with some degree of respect by a whole suite of relevant stakeholders who are aware of the strengths of the system, but also some of its constraints. Used appropriately, LCA is a good indicator and consideration should be given to extending its use beyond that of prime land, for example Classes 3.2-5.1 are the backbone of the Scottish livestock industry and there are climate change implications for those classes too.

This research has been funded by Scottish Government through their strategic research programmes: Environment: Land Use and Rural Stewardship (2006-11) and Environmental Change (2011-16). 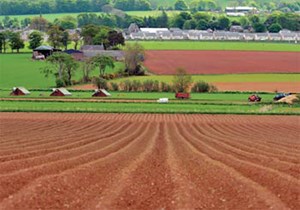