The number of incidents and related Customer Minutes Lost (CML) vary considerably across the years. This makes it unrealistic to identify a trend over a short time span.

Energy security depends on a complex system to generate, store, and distribute energy. Physical infrastructure may be vulnerable to climate change because severe weather events may cause damage to power lines and disruption to substations and power stations (Scottish Government, 2011). Every effort is made to ensure network security and network companies have well developed emergency plans to ensure an effective response to a range of weather events. Whilst emergency planning is vital as a means of managing serious incidents, it is not sufficient to counter the increased risks associated with climate change (Energy Network Association (ENA), 2011).

Severe weather events, which are projected to occur more frequently as a result of climate change, pose a threat to the security of the electricity supply and can result in customer interruptions (Ofgem, 2012).  An engineering report produced by the ENA in 2011 (ENA, 2011) identifies that rising temperatures and sea levels, and increases in winter rainfall, summer droughts and storm surges, will have the largest impact on electricity networks in the UK based on current climate change projections.  Temperature rises could affect overhead line conductors and structures, underground cable systems, switchgear and transformers. Similarly substations and network earthing systems might be adversely affected by an increase in summer drought conditions. Side effects of weather-related changes will also have an effect as, for example, overhead lines are likely to be affected by greater interference from vegetation as a result of the prolonged growing season. Climate change will also increase flooding, and this risk to energy supply is considered separately (see BE4/14).

Disruption to the electricity supply is assessed via two metrics - Customer Interruptions (CI) and Customer Minutes Lost (CML). CI represents the ‘number of customers whose supplies have been interrupted per 100 customers each year, where an interruption to supply lasts for three minutes or longer, excluding re-interruptions’ (Ofgem, 2012, p 21). CML is a measure of ‘the duration of interruptions to supply each year, measured by the average customer minutes lost per customer, where an interruption of supply to the customer lasts three minutes or longer’ (Ofgem, 2012, p 21).

The metrics CI and CML are provided for each part of the electricity distribution system:

CI and CML are lagging indicators of network investment, in that changes in these two metrics reflect earlier changes in the level of investment. Where a network is maintained in good condition, there will be fewer and shorter interruptions.

BE4/14  Electricity supply disruption due to flooding

Electricity distribution network operators (DNOs) are responsible for providing the network that transports electricity from the transmission system to consumers. There are two DNOs in Scotland, Scottish Power and Scottish & Southern Energy, and each is granted a distribution licence to operate. Ofgem sets price controls to define the revenues that each DNO may collect from customers, and also puts incentives in place to promote innovation, efficiency, and the provision of adequate network capacity, security, reliability and quality of service.

In 2008, eleven energy companies commissioned the Met Office to conduct an investigation into the impact of climate change on the UK energy industry. Climate scientists and industry experts worked together to develop practical applications and business strategies to meet the challenges posed by climate change (ENA, 2011). Subsequently the Met Office was commissioned to build a risk model in order to quantify the relationship between climate and network faults. Based on the risks identified, ENA member companies identified adaptation actions for the top priority risks.

Figure 1 shows the number of incidents of weather-related disruption (excluding flooding) to the electricity supply for each year between 1995 and 2016, for HV and LV distribution, and KV transmission networks, and the total for all three combined. The total number of incidents has varied quite widely across this period, with the lowest number of reported incidents in 2016 (1,688), and the highest number in 2011 (5,721). The chart also shows that the number of customer interruptions is generally similar for HV and LV networks, and is lower for KV networks. 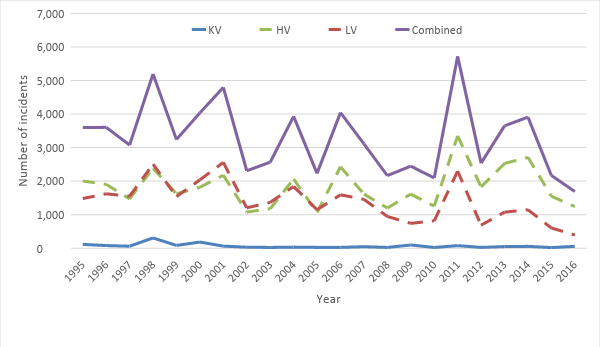 Figure 1 Number of interruptions to the electricity supply caused by severe weather, 1995-2016

Figure 2 shows the number of CML due to interruptions to the electricity supply caused by severe weather events (excluding flooding) for each year between 1995 and 2016 for HV, LV, KV, and the total for all three combined. The total number of CML varies greatly, with a series of peaks and troughs across the period. The highest value is recorded in 1998 (254,325,431 CML) and the lowest in 2016 (18,704,232 CML). The figure also shows that most CML resulted from interruptions to HV networks. This suggests that although interruptions on HV and LV networks occur with similar frequency, those on the HV network have a greater impact on customers. 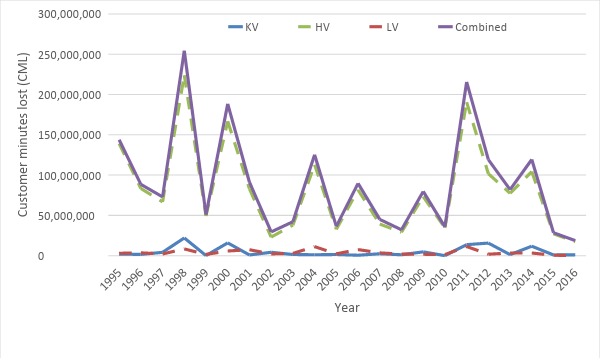 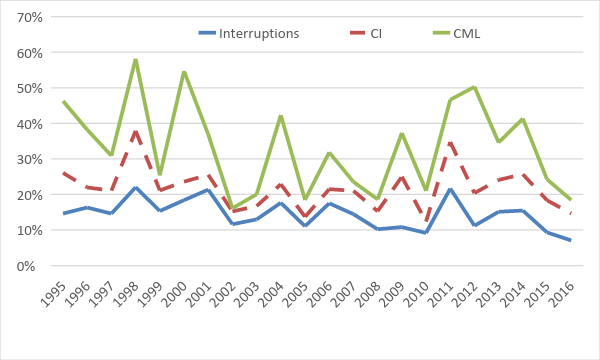 The UK climate projections (UKCP09) provide climate information for the UK up until the end of the century. Predicted increases in temperature, precipitation, sea levels and storm surges (ENA, 2011) are expected to ‘increase the severity and frequency of natural hazard threats to critical energy infrastructure, including exposure to flooding, extreme temperatures, and subsidence’ (The Scottish Government, 2011). This may increase the risk of interruption to the electricity supply. Updated climate projections, UKCP18, are currently being prepared.

The RIIO-ED1 price control framework for provision of lower voltage electricity to homes and businesses runs from 2015 until 2023. During its first 2 years of operation, at a UK level there have been significant improvements in network reliability; although the second year saw a slight decrease in performance attributed to poor weather and storms (Ofgem, 2017).

The data on disruption does not show an obvious pattern of incidents and faults each year. The number of incidents and related CML vary considerably across the years, which, given the irregular occurrence of severe weather events, is not surprising. This makes it difficult to interpret the data, as a single extreme weather event could occur in any given year and have a marked impact on CML. Thus changes over the course of a just a few years may not reflect adaptation.

Severe weather events exhibit large annual variability, so yearly monitoring of CML may be insufficient to reflect adaptation.   In addition, the information in NaFIRS gives only the broad cause of the interruption and the customer minutes lost. For example, it does not provide contextual information about loss of other community services that depend on electricity.

The NaFIRS database includes multiple causes within the category of weather-related disruption. Of these, this indicator includes the following direct causes:

The indicator does not include:

Flooding; Fire not due to faults; Growing or falling trees (not felled); Windborne materials; Environment.

The data used in this indicator is from the National Fault and Interruption Reporting Scheme (NaFIRS) and was supplied by Brodie Rutz at the Energy Network Association (ENA).

The 2016 version of this indicator was compiled by Ailsa Strathie, Lynne Jack and colleagues at Heriot-Watt University with input from Katherine Beckmann and others at ClimateXChange.

The data was sourced from the National Fault and Interruption Reporting Scheme (NaFIRS) data supplied by the Energy Network Association.