How will climate change affect impacts caused by extreme weather?

There are a wide range of impacts that arise from extreme and challenging weather in Scotland.  Some of these are likely to be exacerbated by climate change, while others may be relatively unaffected.  Four major impacts of extreme weather on infrastructure are given in the table below which shows the different effects of climate change on each issue.  Challenges due to snow and ice are expected to reduce as the century progresses.  Geo-hazards such as landslides are expected to increase.  Flooding, which will also increase, is covered in a separate narrative – Flooding, Infrastructure and Climate Change.

Adaptation actions for all four impact types fall into the following three categories:

Policy levers to reduce impacts and to speed up recovery times may often work indirectly – for example through the regulations that govern the operations of utility and service providers (of water, energy, telecoms, trunk road operators).  As an example, penalties for service interruption act to incentivise operators to invest in appropriate defence and recovery schemes (energy suppliers are subject to such a scheme).   In this case, adaptation is achieved by third parties (utility providers) responding to regulations and incentives / penalties that favour good performance in the face of climate change.

Appropriate standards and regulations are important both for the Built Environment and for transport networks.  In this sector the policy levers that can help to achieve adaptation and resilience are ‘climate-informed’ standards and regulations.  Scottish Government’s Building Standards Division has already assessed several of its building regulations in relation to climate change.  Examples include water efficiency requirements and resistance to wind-driven rain.  Trunk road and rail track specifications are also subject to updates that reflect changing climate challenges.

Preparedness also plays a vital role in reducing impacts.  Utilities, the emergency services and communities can all benefit from measures that improve preparedness and recovery mechanisms.  The Scottish approach is set out in ‘Ready Scotland’ which supports integrated emergency management (IEM) to deal with emergencies.  Scottish Government’s Resilience Division and a wide range of associated delivery agencies manage the strategies, resources and actions needed to address climate impacts, as set out in the publication ‘Preparing Scotland’.   Examples of adaptation actions include:

Transport Scotland works with others to minimise the impact of geo-hazard interruptions to transport networks. Initiatives include the following:

Scottish Water is a key player in addressing reduced water availability, and actions include:

Building Standards ensures that building regulations keep pace with climate change, so as to minimise the potential problems stemming from wind-driven rain.  Actions in this area include:

A range of utility providers work to ensure that the impact from damage to energy and ICT networks caused by storms, winds and lightning is kept to a minimum.  Actions include:

The suite of indicators on challenging and extreme weather impacts cover the following:

Geo-hazards:  Older bridges (pre-20th century) are more likely to be at risk of scour.  Major modern bridges are rarely susceptible due to advances in structural design and understanding of scour.   Recent figures show that under 11% of trunk road bridges have a moderate or higher susceptibility to scour.  However, over 50% of rail bridges are at moderate or higher risk of scour.  It is anticipated that climate change will increase scour risk for all bridges, but particularly for older bridge assets. See Road and rail bridges vulnerable to scour BT26

Buildings and wind-driven rain:  Buildings in a good state of repair are more likely to be robust in the face of extreme weather.  Disrepair may also increase the likelihood of penetrating damp.  The proportion of housing with some form of disrepair has remained similar since 2004, and disrepair is more common in older buildings.  28% of the Scottish Housing stock has some critical element disrepair that is also urgent.  See Building condition and disrepair BB16 (note that this indicator is both a risk and an action indicator) and Number of households/people falling below the SHQS & Tolerable Standard CRS58

Water supply:  At present, water shortages are not a serious problem in Scotland, and since 2003 there have only been four times where the water supply was at serious risk.   The percentage of customers relying on zones in deficit fell from 30% to under 6% between 2007/2008 and 2013/2014.  This was due to Scottish Water’s investments to improve water supply and to reduce leakage levels.   Nonetheless, nearly 40% of water supply zones still show a (theoretical) deficit in the calculated Supply Demand Balance (SDB) for 2014.  The incidence of deficit may increase unless water network investments keep pace with rainfall changes.  See Customers and zones vulnerable to supply deficit BW7

Extreme weather and power supply:  High winds and lightning are both a major cause of interruptions to the power supply.  Winds and gales caused over 50% of lost time (570, 000 days-worth of customer interruption), snow, sleet and blizzard over 22%, and lightning over 15%.  Solar heat has a negligible impact at present (causing less than 0.5% of lost time). Various other weather-related causes of disruption, also of negligible impact, include ice, rain, subsidence, and freezing fog.  See Electricity supply disruption caused by severe weather events BE15.

Buildings:  Those in a good state of repair are more likely to be robust in the face of extreme weather, and more resistant to penetrating damp.  The proportion of housing with some form of disrepair has remained similar since 2004, and disrepair is more common in older buildings.  28% of the Scottish Housing stock, 28%, has some critical element disrepair that is also urgent. See: Building condition and disrepair BB16 (this is also a risk indicator).

Reduced Water Supply:  Scottish Water has successfully reduced leakage to the ‘Economic Level of Leakage’ (ELL) a year ahead of target – the point where the cost of reducing leakage becomes greater than the savings from reduced water production.   See Water leakage and losses BW6

It is hoped that future availability of suitable data will enable the development of a number of additional indicators:

Impacts from challenging weather such as high winds, storms, and lightning may occur at the same time as flooding impacts.  The narrative covering Flooding and Infrastructure covers a wide range of indicators for this area.

Some of the indicators covered in the Resilience and Resource Use narrative are also linked, for example those tracking reduction in water leakage.

The health impacts as a result of storms, floods and extreme temperatures are covered by the narrative on Climate change risks to society and our capacity to adapt. 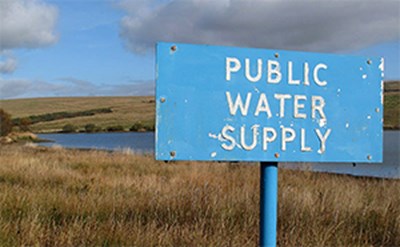