How is Scotland progressing towards net-zero?

The annual emissions statistics for Scotland tells us how we are doing on our way to net-zero greenhouse gas (GHG) emission by 2045 compared to the 1990 baseline. As with many complex and detailed statistics there is a time-lag; the estimates published by the Scottish Government earlier this summer captures our emissions 1990-2018. In this blog CXC Policy Director Dave Reay and Programme Manager Dan Barlow look at the implications for climate change policy.

Scotland has made significant cuts in emissions – overall nearly halved since 1990, but – there is always a but - progress varies significantly between sectors. Closing Scotland’s coal fired power stations and huge increases in renewable energy, particularly from wind power, has transformed our electricity supply. We are also doing well in reducing emissions from waste, by capturing methane from landfill, and in increasing the energy efficiency of our homes.

In 2018 equivalent to three quarters of electricity consumed in Scotland came from renewables. The increase in the renewable component of Scotland’s electricity generation has been significant – from 12% in 2004 to 55% in 2018. This has corresponded with a decrease in fossil fuel generation (50% to 16% over same period). 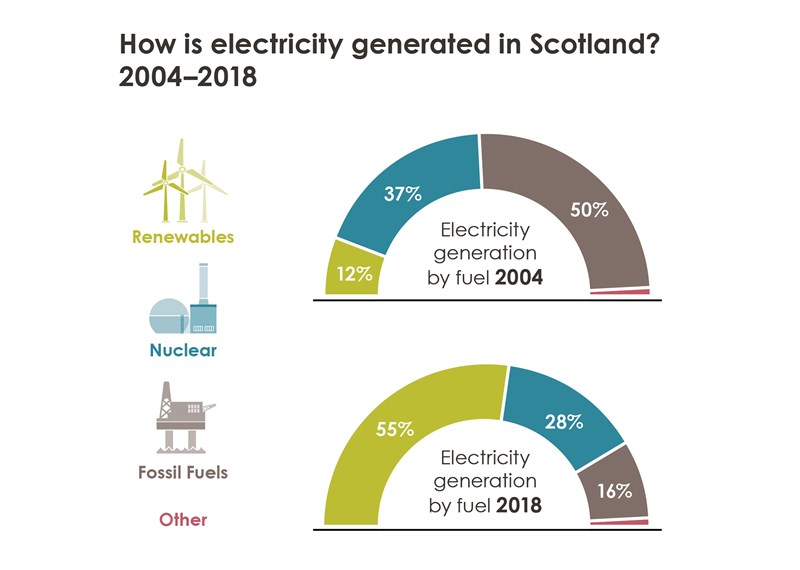 Increasing the renewable electricity generation further will help support moves to cut emissions from transport and heating by offering a renewable alternative to petrol, diesel and natural gas.

The bulk of Scotland’s renewable generation is onshore wind followed by hydro. Offshore wind is now making a contribution too. This is a sector we expect to grow significantly, with many new schemes now consented and several set to feed in electricity to the grid by 2023.

Emissions from agriculture, transport[2] and the built environment have not been reduced at the same pace. These three sectors are now top of Scotland’s GHG emissions. 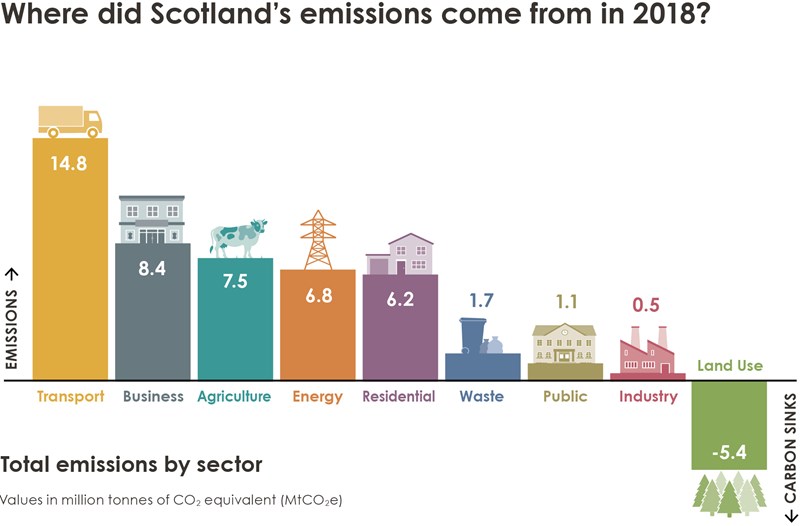 The high emitting sectors are where we now need to focus to reach the interim targets for 2030. And it is going to be a balancing act.

The amount of carbon absorbed by Scotland’s land and forests is increasing. This is crucial on the road to net-zero – balancing our emissions with what land and forests can absorb and store, or can be removed through industrial carbon capture. Net-zero is the point where we balance emissions removed from the atmosphere, (e.g. through more forestry) and carbon capture, and emissions released into the atmosphere. 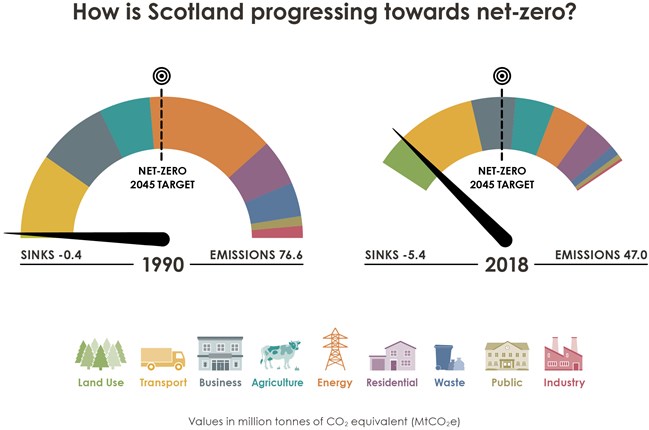 Land use change and forestry can be both a source and a sink, the good news is that in 2018 it absorbed significantly more carbon emissions than it released: a net ‘sink’.

This balance is important because it is difficult to entirely remove emissions in some sectors, e.g. from a specific industrial process or from elements of livestock production. Emissions removed through carbon sinks provide capacity to allow for some of these ‘unavoidable’ emissions in Scotland while still achieving net-zero[3].

Scotland is particularly well placed to both cut emissions and increase the amount of carbon removed from the atmosphere through agricultural land management practices, forestry and peatland restoration opportunities.

‘Carbon neutral’ and net-zero are sometimes used interchangeably in the climate change debate. They are not always interchangeable though as a number of greenhouse gases, not just carbon dioxide, contribute towards Scotland’s overall emissions. The net zero target for Scotland therefore includes all greenhouse gases.

In reporting the overall climate impact of different greenhouse gases, they are each compared relative to carbon dioxide - so emissions are reported as ‘carbon dioxide equivalent’ (CO2e). In 2018 carbon dioxide accounted for nearly three quarters of Scotland’s total GHG emissions, followed by methane as the next most significant at 15% and nitrous oxide coming third (8%) . The impact that these gases have on warming relates not just to the volume released, but also to how much heat energy they absorb and how long they last in the atmosphere.  Release of a tonne of methane has 25 times worse impact on warming than a tonne of carbon dioxide, and a tonne of nitrous oxide has an even greater impact (~300x).

Of the three quarters of emissions that relate to carbon dioxide the biggest sources remain electricity generation, emissions from heating our homes and offices, and from transport. While cutting emissions of methane and nitrous oxide would mainly need to focus on approaches that address emissions from the agriculture sector. This could for example be through livestock and soil management[4]. 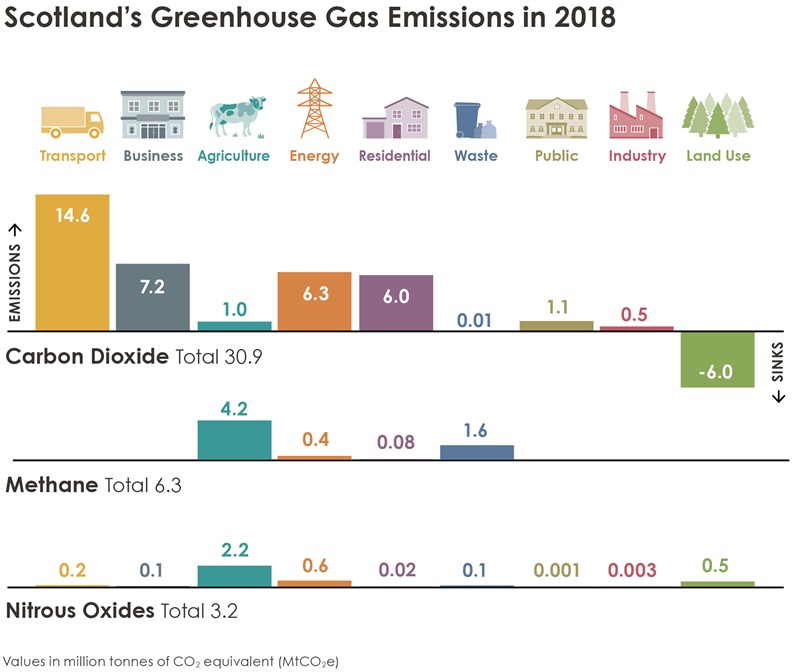 Over the decade ahead we need to use the data from the annual GHG statistics to help inform priorities, flag shortfalls and ensure that all sectors are making the progress required to meet Scotland’s net-zero goal.

[4] Read more about CXC research on land use and agriculture