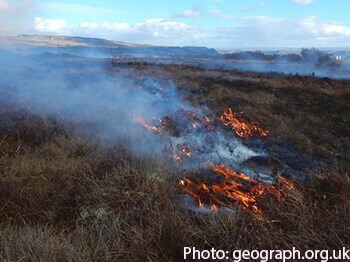 This evidence assessment looks at the current state of knowledge on the impact of muirburn on peatland and peat soils.

Prescribed burning of moorlands has been used for centuries as a land management tool to remove less productive vegetation, mainly heather, and to encourage new growth. Originally used to increase productivity for sheep and cattle grazing, it is also now widely used to improve the habitat for red grouse. In Scotland, this is referred to as muirburn.

Carrying out muirburn as a land management tool, known as ‘prescribed burning’, is tightly regulated in Scotland, summarised in The Muirburn Code which was last revised in 2011.