A key aspect of the Scottish Government’s aspirations is inclusive economic growth. That is, growth across the income distribution. This project looked at the pattern of uptake of small-scale (domestic) photovoltaic devices under the UK-wide Feed in Tariff programme. 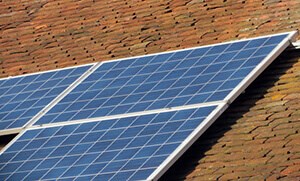 The feed-in tariff (FiT) was introduced in April 2010 for small-scale renewable electricity technologies in Great Britain. This promised the installing household a fixed price per unit of electricity – comprised from a “generation” tariff which was differentiated by technology, and an “export” tariff which was technology-blind. FITs have spurred significant development, particularly of Photovoltaic (PV) systems. During our sample period of the first 26 months of operation, over 1GW of domestic renewable electricity capacity and almost 300,000 installations were added. In all, 99.5% of these installations were PV, and 98.7% of capacity was in PV systems.

We found that installation of domestic scale PV devices is a financial, rather than an environmental consideration. There is also a clear early adopter advantage with respect to these renewable devices and our models suggest that the rate of uptake of household renewable energy devices in one area is spatially dependent upon the uptake in neighbouring areas.

As a spatially- and income-blind levy on electricity consumption, and given that uptake is greatest in wealthier areas, policies like FiTs could exacerbate economic inequalities between wealthier and less wealthy areas.