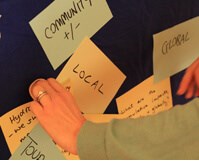 How do people feel about wind farms when they are given an opportunity to learn more about the topic and consider and discuss it as part of a group?

This unique research project, the most comprehensive of its kind and a world first, asked three groups of people (citizens’ juries) to come up with criteria for decision making about onshore wind farms in Scotland. Despite the diversity of views in the groups, all three juries managed to develop and agree a list of principles, showing that people from very different backgrounds and with varying perspectives can work together through difficult issues and come up with solutions.

Between October 2013 and February 2014 three groups of 15-20 people spent two Saturdays together listening to speakers before being asked to discuss, as a group, the question:

“There are strong views on wind farms in Scotland, with some people being strongly opposed, others being strongly in favour and a range of opinions in between. What should be the key principles for deciding about wind farm development, and why?"

Scottish Planning Policy emphasises the importance of public engagement, requiring that it should be early, meaningful and proportionate. However, to date, deliberative engagement has not been actively used to inform planning policy or decisions in Scotland. This project focussed on onshore wind farm development, and was designed to offer insight into key dynamics in citizen participation and public deliberation – rather than to inform decision-making.

The project report provides the policy and practice community with practical advice about organising and facilitating deliberative public engagement in support of decision-making. It explores how citizens’ knowledge and perspectives evolve during the process. It presents a picture of what the jurors decided matters most to them about wind farm development. It analyses whether three juries, addressing the same topic under similar conditions, generate different outcomes. And it explores the potential role of citizens’ juries in decision-making.

From the start of the juries, through hearing from expert witnesses, and discussing within the groups, we saw how the juries became a school in democracy. The participants enjoyed learning about the issue and really appreciated being asked their opinion in an atmosphere of respect for different views.

The project was overseen by a Stewarding Board comprising representatives from organisations with a range of opinions about wind farm development in Scotland. This Board discussed the jury task, project design, choice of jury locations and choice of ‘expert witnesses’.

The three jury locations where chosen to be of similar size and rural characteristics but with different exposure to wind farm developments:

There were a total of 47 jurors: 15 in Coldstream, 14 in Helensburgh and 18 in Aberfeldy. Taken together, the three juries reflected the diverse views and demographics of the Scottish population – i.e. education, gender, age and income. This meant, for example, that the juries brought together three generations to discuss the topic.