Changes in temperature and rainfall can affect the spread and proliferation of infection-causing (pathogenic) bacteria. Bacteria thrive in warm, wet conditions, for example, whilst increased ‘run-off’ caused by heavy rain can assist bacteria to spread from one area to another. 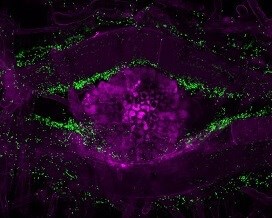 Some of the most dangerous human diseases are caused by zoonotic pathogens, which are transmitted between animals and humans. Many of these pathogens are capable of interacting with alternative hosts and environments, such as plants and soil.  This means that plants can play an important part in the transmission of pathogens, either to other animals through grazing or feed, or to humans through edible crops.

As the climate changes, it is increasingly important to understand how these bacteria are transmitted from one environment to another so that infection may be avoided.

This paper reports on experimental research carried out by the James Hutton institute and explores how climate change may affect the transmission and adaptation of zoonotic pathogens to various environments.