Over 70% of Scotland’s land area is used for agriculture and so agricultural policy and practice is an important driver of land use. In Scotland, climate change is expected to present the opportunity of increasing agricultural productivity, while globally there are climate driven concerns over food security coupled with an increasing demand for food for a growing population. Together, these drivers are expected to lead to agricultural intensification. To realise an agricultural opportunity, while retaining the biodiversity and wider ecosystem service value of land, careful management is required. Historically, agricultural intensification has been the primary driver in depleting the range of ecosystem services delivered by agriculture.

The Land Capability for Agriculture (LCA) classification system identifies the flexibility of land for different uses, with the ‘top classes’ that make up our best arable farmland being defined as Prime agricultural land. Much of Scotland’s agricultural land is currently not suitable for intensive farming – defined as Less Favourable Area (LFA) and is poor quality grassland dedicated to cattle and sheep farming.

Climate change is likely to directly affect the LCA classification in some parts of Scotland, primarily due to warmer summers. Increasing temperatures have already improved land capability and increased the area of prime agricultural land in Scotland (NA2 Area of Prime Agricultural Land). This favourable situation is complicated however by changes in other aspects of land capability, notably drought risk and wetness risk. Changes in land capability already occurring, and further projected changes, afford both opportunities and risks. There are opportunities to utilise an increased area of prime agricultural land to improve food security. This is particularly important in light of the projected increase in global demand for food with a growing population, together with the adverse impact of climate change on agriculture in many regions of the world. Agricultural opportunities could benefit Scotland’s rural economy and its economically important food and drink sector. The risks centre around the negative impacts of agricultural intensification on the ability of the land to provide ecosystem services that are vital to our society and economy, such as natural flood control, water quality and carbon storage. In the past, agricultural intensification has been accompanied by loss of biodiversity and other negative environmental impacts (NA8 Sustainable intensification index; NA5 Trends in breeding farmland birds).

Change in land capability due to climate change is just one driver affecting land use within a complex system that involves combined environmental, economic, political and social factors – market forces, government policies for agriculture, biodiversity, forestry and renewable energy (NA1 Comparison of land capability against actual land use; NA9 Proportion of farmland under High Nature Value farming systems). There are therefore multiple factors that come into play in determining whether flexibility of land use enabled by an increase in land capability actually results in an increased intensity of agriculture for the improved areas.

Adaptation options: How can we sustainably increase agricultural production?

A broad suite of agriculture and Land Use policies will play a key role in achieving the sustainable intensification of agriculture. As evidenced in the past, European and Scottish Government policy drivers and incentives such as the EU CAP and the Scottish Rural Development Programme (SRDP) can have a significant influence on outcomes. These in turn have wider interlinked policy implications, such as in meeting the objectives of the Scottish Biodiversity Strategy.

The ability of policy to influence agricultural practice is evident, with cascading effects for other policy areas such as biodiversity. For example EU funding in the 1970s and 1980s partly drove the intensification of agricultural production that led to declines in many farmland bird populations. In some cases targeted agri-environment and reserve management measures helped reverse these population declines, such as for corncrakes. EU legislation obliges the monitoring, support and maintenance of High Nature Value (HNV) farming systems, traditional extensive systems that provide a landscape that has biodiversity value. There is a potential conflict therefore between agricultural intensification and the need to maintain HNV farming systems.

There is considerable national and international support in policy circles for sustainable intensification as a means to increasing agricultural output (i.e. increasing production per hectare) while maintaining or enhancing the ecosystem services upon which agricultural production depends and meeting societal needs in an equitable way.

Policy measures apart, benefiting from an increase in the area of Prime agricultural land depends not only on climate but a number of interlinked factors – environmental, economic and social. Some areas will continue to be limited by soils and/or topography. Adaptation actions in terms of land management, such as appropriate irrigation and drainage, will also play a key role in maximising opportunities.

The suite of indicators on agricultural intensification cover:

NA2: Area of Prime Agricultural Land (Land Capability) Land capability identifies the flexibility of the land for different uses; the best quality land for agriculture is defined as Prime land. This indicator monitors the amount of prime agricultural land in Scotland over time. It is a useful indicator provides it is used appropriately. It needs to be considered in combination with other aspects of land capability, notably drought risk and wetness risk (see indicators NA28 Wetness risk for agriculture (arable suitability and grassland suitability); NA29 Drought risk to agricultural land). There are approximately 11,000km2 of Prime agricultural land is Scotland. The long-term trend is for this area to increase, but with important short-term variations and geographic differences.

NA1: Comparison of land capability against actual land use  This indicator seeks to characterise the relationship between the capability of the land and its actual use, although as yet no single value indicator has been devised to summarise this relationship. The most recent published figures defining the relationship are for 2011 though data to support analysis for 2000-2014 are available. Given the growing body of evidence that the LCA classification is changing in response to weather and climate, understanding how this potential relates to actual changes in land cover is vital. A key limitation in using this indicator is the difficulty in adequately attributing change in land use to a host of complex and inter-related drivers: climate induced changes in capability together with environmental, economic, social and political drivers.

NA9: Proportion of farmland (Utilised Agricultural Area) under High Nature Value (HNV) farming systems This indicator was developed by the Scottish Government to support the monitoring of the Scottish Rural Development Programme (SRDP) and the Scottish Government strategies such as the Land Use Strategy. It monitors the proportion of farmland that is under High Nature Value farming systems – traditional low intensity systems that include a mix of moorland, grassland and woodland. Such systems have declined historically due to poor economic viability. In its current form, the indicator is based simply on the classification of farm type. Lack of spatial data limits the level at which HNV farming can be calculated and mapped. There is the possibility in future to refine the indicator, for example by including uptake of specific SRDP measures related to HNV farming. In 2013, 2.4m hectares, 44% of farmland in Scotland was under HNV farming. A trend cannot be determined due to recent changes in farm classification; 2013 will be used as the base year for future analysis.

Soil management is a key element in the effect of agriculture and land use on climate change. It has the potential to mitigate climate change by maximising carbon storage, but also to release more carbon to the atmosphere. For example, the expansion of arable cropping and increasing the area under annual tillage could increase carbon loss to the atmosphere. The narrative Condition of agricultural soils is therefore closely linked to this narrative, along with Water quality and availability and Suitability and productivity (agriculture).

Agricultural landscapes are important in terms of the ecosystem services they provide and the biodiversity they support. The biodiversity narratives Tracking suitable space in a changing climate and Resilience of the natural environment (terrestrial) provide further information. 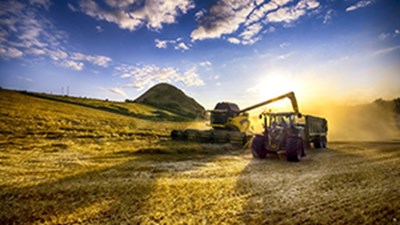