This represents approximately 15% of the total high forest pine area in the NFE.

[1] Includes compartments which have been surveyed as positive for DNB either in the latest year or in an earlier year. Data provided by FCS Dec2013.

Forestpests and pathogens can cause extensive and catastrophic damage to productive forestry stocks. Affected woodlands may experience sufficiently severe outbreaks to reduce productivity, timber quality and/or to require changing forest management. The majority of insect pests that currently affect UK forestry are likely to benefit from climate change as a result of increased activity and reduced winter mortality. If climatic conditions influence the success of a pest or pathogen establishing, breeding and spreading, then a change in climatic conditions is likely to influence their prevalence and severity (Moffat et al., 2012). Other effects may be more indirect and result from increased susceptibility to infection due to damage or stress to the trees as a result of storms, drought or temperature extremes.

The fungal disease Dothistroma needle blight (DNB), often referred to as ‘Red Band Needle Blight’, has become the most significant disease affecting coniferous trees in the UK. The fungus affects the needles of the infected tree, which eventually shed. As this continues, year on year, gradually the tree will weaken, significantly reducing timber yields. It can also eventually lead to mortality. Whilst it was first recorded in the UK in the 1950s, it was not known in Scotland until 2002 and has now been identified in Corsican, Lodgepole and Scots pine stands (though primarily a disease of pines, five spruce species, European larch and Douglas fir are also known to host the disease) (Forestry Commission, 2010).

This indicator monitors the abundance of DNB in the Forestry Commission Scotland National Forest Estate (NFE) which holds over 35% of Scotland’s woodland. The indicator is based on DNB surveys which have taken place annually since 2006 to monitor the distribution and spread of the disease. Although the data covers the NFE only, changes in the abundance of DNB in these areas is likely to be indicative of DNB abundance across forestry in Scotland as a whole.

The current extent of pine woodland in the NFE that is known to have been infected with DNB is 13722 ha from 1661 infected sub-compartments (see Figure 1).

The impacts on timber yields are currently most severe on Corsican and Lodgepole pine (particularly those of ‘Inland’ origin), with trees infected by DNB becoming unmarketable over time (Forestry Commission Scotland 2013).

Figure 1 Total pine area (ha) in FCS sub-compartments with positive DNB survey results (2006-2013). Positive status is accumulative and therefore results include data for compartments which have been surveyed as positive for DNB either in the latest year or in an earlier. Data provided by FCS Dec 2013 (2013 data incomplete).

Due to changes in annual surveying effort over this period (most notably a significant increase in area surveyed between 2010-2011), it is important to consider the positive survey results as a proportion of total area surveyed. Figure 2 shows that over this period there has been an average annual increase of positive DNB sub-compartments of around 1% of total number surveyed, with the latest results showing that approximately 10% of all surveyed pine forestry in the NFE is positive for DNB. 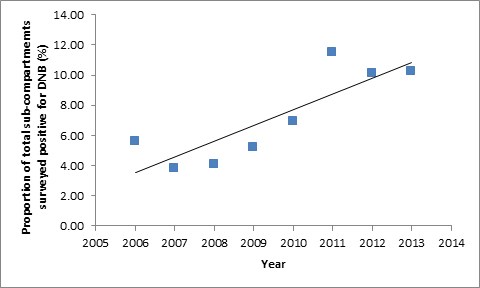 Figure 2 Proportion (%) of total (accumulative)sub-compartments surveyed which show a positive result for DNB (results for 2013 are incomplete).

Whilst it was first recorded in the UK in the 1950s, it was not known in Scotland until 2002 and has now been identified in Corsican, Lodgepole and Scots pine stands (though primarily a disease of pines, five spruce species, European larch and Douglas fir are also known to host the disease) (Forestry Commission, 2010).

There has been a dramatic increase in identified infection since first detected in 2002, with the earliest available survey figures being from 2006 (see Figure 3 for comparison between 2007 and 2013). 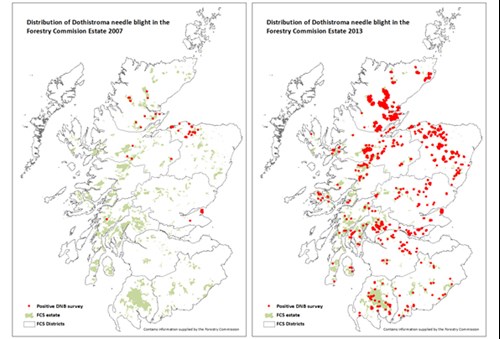 Analysis for the Climate Change Risk Assessment for the Forestry Sector (Moffat et al 2012) indicated that potentially by the 2020s, between 12% to 25%[1] of pine forest area in the UK may be affected by DNB, with this figure rising to between 49% to 98%[2] in the 2050s and 100%[3] in the 2080s. Projected increases in spring and summer rainfall, along with temperature increases are considered to be the key drivers for determining the prevalence of DNB (Brown and Webber, 2008). Regions with the highest mean summer temperatures, along with those areas with the greatest projected change in temperatures are likely to see the greatest change in the level of risk (Moffat et al 2012). However, the basis of the response functions was associated with high uncertainty and further research is required to provide stronger evidence for future risk.

Limiting the spread and potential impact of DNB on Scottish forestry is being addressed by the FCS Dothistroma Needle Blight Action Plan, which is reviewed annually. As well as increasing awareness, research and detection effort, the action plan also covers preventative measures (e.g. destruction of infected plants in nurseries, buffer zones around Caledonian pinewoods), and the prioritisation of felling infected stock (FCS, 2013). Increasing diversity in the forest stock is also believed to increase overall forest resilience to a wide number of potential risks as well as delaying or reducing the build-up of pests and diseases within a plantation (Brown & Claydon, 2012).

In 2011, the disease was found in Abernethy, an RSPB-owned native pinewood, bringing to the fore the threat to native pinewoods. Many of these areas have until recently had a poor regeneration record, and there is concern that impacts of DNB on young trees could further threaten the age class structure, and hence continuity of these woodland (Forestry Commission 2012). Mature pine in Caledonian pinewoods currently appear to be less susceptible to the disease but there is concern that this could change as there is considerable potential for genetic exchange due to the presence of two mating types, a high number of genotypes of Dothistroma septosporum, and the possible introduction of D. pini, which is responsible for DNB in North-Central America, Russia, Ukraine, France and Hungary (Forestry Commission Scotland 2013).

The majority of DNB infected forestry is in the north and north east of Scotland, with over half of infected pine in the North Highland district (see Table 1 and Figure 4a). This distribution largely reflects the distribution of pine in general across Scotland.

Figure 4b highlights that over a third of all forestry surveyed in the North Highland district is now infected with DNB. However, the detected infection proportion  does not show quite such a clear relationship with pine forestry distribution as Figure 4a, with the Scottish Lowlands having a relatively high proportion of infection (16.8%), though this district holds only approximately 2% of the National Forest Estate pine.

Table 1 Changing DNB distribution in FCS Forest Districts (area (ha) of surveyed FCS sub-compartments with positive DNB survey results). Table also provides 2013 figure for total pine area in each district. Positive status is accumulative and therefore results include data for compartments which have been surveyed as positive for DNB either in the latest year or in an earlier. Data provided by FCS Dec 2013, results for 2013 are incomplete. 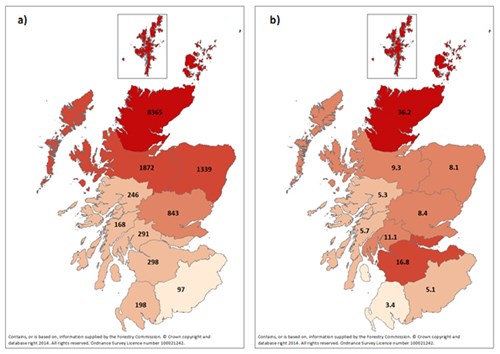 Whilst reasons for the increase in the disease are presently unclear, there is some evidence to suggest that increased rainfall in spring and summer coupled with a trend towards warmer springs is optimising conditions for spore dispersal and infection (Brown and Webber, 2008).

The increase in geographic extent and intensity of the disease across the whole of Britain is probably due to a combination of factors including an increase in favourable climatic conditions, as well as availability of suitable hosts, a genetically diverse fungal population, and movement of the pathogen through the plant trade.

The survey methodology targets priority areas, and survey effort has varied considerably over the period (Figure 5). There was a significant increase in 2011 in the amount of forestry included in the annual survey, with 2012 also maintaining this extent (NB the data presented here for 2013 does not represent the full data for the year). 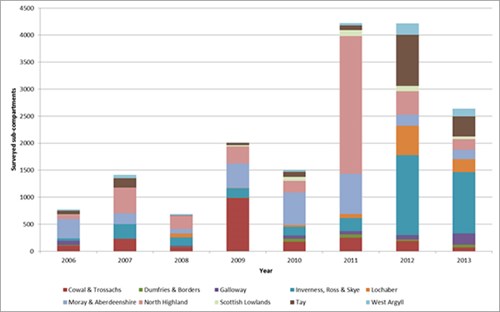 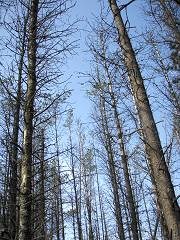