Phytophthora ramorum (Pr) is a fungus-like pathogen which is causing serious damage and mortality to trees and other plants.  Although the disease can infect around 150 plant and tree species, in Britain, larches (Japanese, European and Hybrid) have been found to be particularly susceptible and can die within one to two seasons after infection.

Studies indicate that the UK is currently climatically a very suitable area for Pr establishment and survival, but it is not yet clear how climate change will impact upon its prevalence (Moffat et al., 2012). However, there is an east-west climatic divide, with increased risk in the moister west of the UK, with the lowest risk noted for Eastern Scotland (DEFRA, 2012). This climatic division is reflected in the three Forestry Commission Risk Zones (Figure 1) and are used to guide forestry management (Forestry Commission Scotland, 2015a): 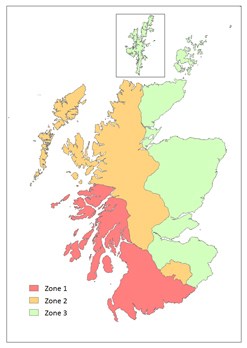 There are three species of larch in Scotland, the European (Larix decidua), the Japanese (Larix kaempferi) and the Hybrid (Larix x eurolepis). To date, it is Japanese larch which has shown by far the greatest susceptibility to the disease, as well as being the most prevalent species of the three (Figure 2). However data on all three species is presented here as it is known that both the European and Hybrid types are susceptible (Defra, 2014) and an outbreak was detected in European larch in Cornwall in 2011 (Forestry Commission, 2011a).

This indicator considers the risk to larch of infection based on both the absolute area and proportion of Scotland’s larch which lies within the Risk Zones. Areal data provides a metric of the amount of larch at high risk of exposure to the disease; whereas the proportional data enable the identification of any change in the potential threat to Scottish larch based forestry and timber products as a whole.  Larch area data are based upon the primary, secondary and tertiary species data available in the Forestry Commission Scotland Sub-compartment Database 2014.

[1] Areas at 31 March 2012. These measurements are for ‘overbark standing’ which is a term used as a qualification when the volume of wood includes the bark.

The latest data (2014) shows that 10341 ha of larch in the National Forest Estate (NFE) lies within the current Risk Zone 1 (Figure2; Table 1). This represents 41% of all larch stock within the estate. For Japanese larch alone this figure is slightly higher at 45% (6386 ha). Of the three species, only European larch is predominantly grown in the lower risk areas.

Figure 2 Total area (ha) of larch (in the National Forest Estate) in the Phytophthora ramorum Risk Zone. Data is based on the primary, secondary and tertiary areas contained in the Forestry Commission Scotland Sub-compartment Database 2014

Prior to 2009, Phytophthora ramorum was limited in its extent and impact in the UK.  However during 2009 it was found infecting and killing large numbers of Japanese larch trees in South West England.  In 2010 it was found on Japanese larches in Wales, Northern Ireland and the Republic of Ireland, and in Scotland at one site on the Craignish peninsula. During 2011 further infection sites were found on Mull and in Dumfries and Galloway (Forestry Commission Scotland, 2015b). As a consequence, Risk Zones were revised in 2011, expanding Zone 1 to include north west England and the area around the island of Mull (Forestry Commission, 2011b).

There was a significant expansion of outbreaks in Dumfries and Galloway in 2012 and 2013, following a wet autumn and mild winter in 2011/2012 then extremely wet and windy conditions in summer and autumn 2013 (Forestry Commission, 2011c). The current extent of Risk Zone 1 reflects this expansion and the zone now covers a significant portion of Scotland (Figure 1).

The indicator is currently not able to include an analysis of these former extents in conjunction with sub-compartment data.

It is now considered that the eradication of Phytophthora ramorum on larch in Scotland is ‘no longer achievable and the aim now is to contain and slow down new outbreaks’ (Forestry Commission, 2015c). In order to manage the spread of Pr, Statutory Plant Health Notices (SPHNs) are issued by the Forestry Commission in Pr affected areas and require the felling of infected trees and those in a surrounding buffer zone. It is recommended that the felling is followed by a fallow period to further minimise risk of reinfection. Infected timber can still be used commercially, but early felling reduces the potential yield from the stock. Whilst restocking can occur after this period, it is recommended that larch (of any type) is not planted (Forestry Commission, 2011c[1]). New legislation introduced in 2014, brought in a change in restrictions to a smaller area of Risk Zone 1. Within this ‘Management Zone’ (Figure 3), an area where Pr is particularly prevalent, SPHNs are no longer issued for infected trees as this had become an impracticable way to manage the disease. However, movement of infected timber can only occur freely within the Management Zone, with strict controls on whether and how timber is moved outside of the area (Forestry Commission Scotland, 2015d). It is intended that this approach will make procedures in the most infected areas simpler and less time consuming, and will help in the management of Pr not only here but also in the rest of Scotland. 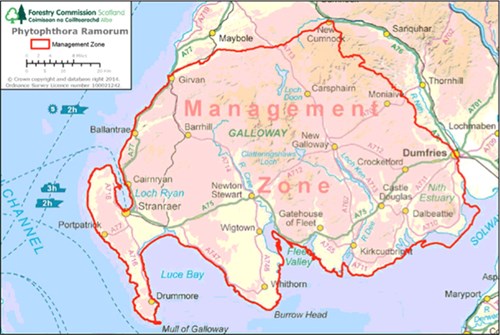 Over the period of 2010-2014, approximately 800 ha of forestry was felled under SPHNs served for Pr(see indicator NF11/NF12). As well as the reduction of larch due to this felling, it is possible that at some point forest managers will assess that the risk of larch trees not reaching economic maturity has become too high to justify planting them, as well as a reduction in nurseries continuing to stock Japanese larch (Moffat, 2015). Forestry Commission guidance for replanting of sites affected by the disease (Forestry Commission, 2010), along with an established strategy to increase the overall resilience of forestry by increasing diversification (FCS, 2013), is also likely to see a change in the planting dynamics for larch (particularly Japanese larch).  As a consequence it is likely that there will be a significant reduction in the area of larch within Risk Zone 1 (including the Management Zone) and an overall shift in the proportional distribution of larch across Scotland.

As the climate changes, so too will the suitability of sites for growing particular timber species (Figure 4). The use of such maps and site-specific tools such as ESC (Ecological Site Classification) by forest managers may well begin to see corresponding shifts in the spatial distribution of larch (along with other species). Whilst Figure 4 shows that much of the most suitable areas for Japanese larch correspond to Risk Zone 1, there are many smaller areas across the East and North of Scotland which will also see increases in suitability. However, as the Risk Zones are in large part determined by climate, it is likely that there will be a need to revise the Risk Zone boundaries as the climate changes. 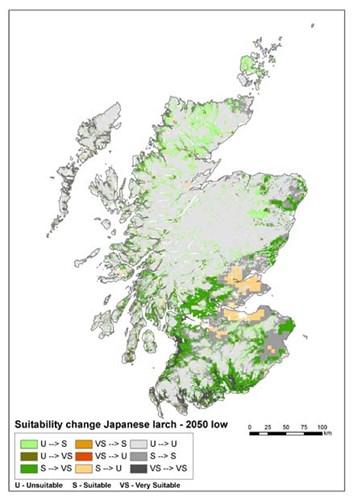 n order to provide further detail to assess any change to the proportion of Scotland’s larch within Risk Zone 1, this indicator will also be informed by analysis of the proportion of new planting (including restocking) of larch species within the NFE that occurs within each Zone (Figure 5) and monitor the changing levels of new planting of larch species within Risk Zone 1 (Figure 6).

Figure 6 shows a decline in the planting of the most susceptible species (Japanese larch) from a high of around 200 ha in 2011, but it is currently too early to assess whether the downward trend is a response to the increased risk from Pr as there was a peak in planting at the start of this period. 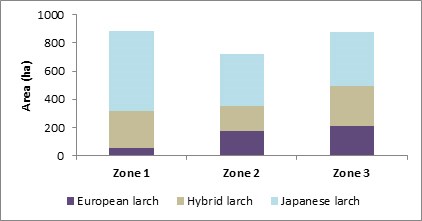 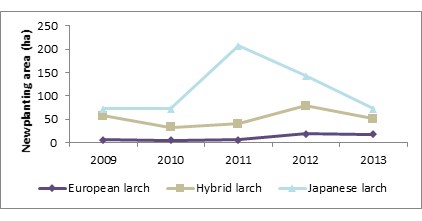 Whilst the prevalence of Phytophthora ramorum is showing an increasing trend (Forestry Commission, 2015b), the indicator analysis is currently unable to show whether there has been any change in the amount of NFE larch that is situated within the climatically vulnerable zone, nor how this has changed as a proportion of all NFE larch.

Silvicultural dynamics that may drive any change in these indicators include:

The indicator currently does not include an analysis of the former extents of Risk Zone 1 in conjunction with sub-compartment data.

The indicator currently covers the FCS National Forest Estate only, and shouldn't be used as a guide to private forestry sector behaviour.

for the Forestry Sector. DEFRA, available online at: http://randd.defra.gov.uk/Default.aspx?Module=More&Location=None&ProjectID=15747 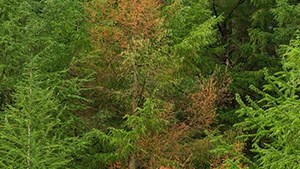