The Shannon Index of Diversity is currently 2.10, which can be considered moderately diverse.

Forest Tree Species Diversity has increased slightly over the last 18 years, with an increase in broadleaf forest area.

Reliance on only a few tree species increases the vulnerability of a forest ecosystem to disturbance, whereas increasing diversity can spread the risk and reduce potential impacts (Thompson et al. 2009).Scotland’s forests consist of relatively few species in significant proportions, and a single species (Sitka spruce) occupies 43% of all forest area. Increasing the diversity of forest tree species grown inScotland can build resilience to climate related threats, including changes to species suitability in an uncertain future climate, and damage from an outbreak of insect pest or plant pathogens. Increased tree species diversity can also increase wider biodiversity and support forest ecosystems to adapt.

This indicator considers the forest tree species composition of standing forest inScotland, and measures the diversity using the Shannon Index, an ecological indicator of diversity which accounts for both the number of species and their proportionate distribution.

NF4 Diversity of tree species ordered for planting in Scotland

The Shannon Index (SI) of diversity accounts for both the number and the proportion of each forest tree species, and can be used to measure diversity. Higher SI values equate to higher diversity. The current SI value for forests in Scotland is 2.10, which equates to moderate diversity based on a total of 81 species categories which were identified in the National Forest Inventory (NFI) (Forestry Commission, 2014). A hypothetical maximum Shannon Index score for Scotland would be 4.4, where all 81 species categories were present equally[1].

Figure 1.Species composition of Scotland’s forests, including both privately owned and National Forest Estate a) Conifer species and b) broadleaf (Forestry Commission, 2014). Data from March 2012.

A previous national inventory was taken in Scotland in 1995, (the National Inventory of Woodland and Trees (Forestry Commission, 2001)), allowing a comparison of forest tree species composition over almost 20 years. Detailed species composition is not available and therefore a Shannon Index value cannot be calculated.

Figure 2 shows the species composition as recorded in 1995. The proportion ofSitkaspruce and larch are similar across both surveys, and the overall proportion of pines is similar at 29% and 28% in 1995 and 2014 respectively, although the grouping of pine species in 1995 prevents further comparison.

The composition of broadleaf species shows a greater change with time. Birch is the dominant species in all surveys, and the area increased from 38% to 43% from 1995 to 2014. The proportions of oak and beech remain similar, and the proportions of ash and sycamore have increased. The category groupings prevent further comparison of minor species.

Recent pathogen outbreaks affecting larch and ash species have reduced the area of these species, through increased felling and decreased planting. This is not evident between the 1995 and 2014 data sets, as the area of ash increased with the increase in broadleaf planting over the wide time frame. The 2014 data were collected in March 2012, which is prior to the peak of the outbreaks.

As a result of changes to legislation and guidelines, species diversity might be expected to increase in future. The UK Forestry Standards include criteria for species diversity, requiring a maximum of 75% of a single species in a management unit (Forestry Commission, 2011). In the UK Woodland Assurance Scheme the maximum is also 75%, reducing to a maximum of 65% where at least two species are suitable for the site and match the management objectives (UKWAS, 2012). Forestry Commission Scotland’s Climate Change programme supports the ‘planning and managing of well-structured and diverse forests’ to build resilience to climate change. (Forestry CommissionScotland, 2013). Additional business and policy objectives support an increase in species diversification for benefits to amenity and recreation, visual impact on the landscape, and improved water quality (Forestry Commission Scotland, 2006).

If increasing tree species diversity is adopted by the sector as a means of building resilience, the rate of change is still likely to be slow. The rate of change is limited by the area of forest which can be felled and replanted each year, currently around 1-2%. Initial change will also be restricted by the forest supply chain, including: timber markets, nursery stock, seed availability, and forest management knowledge and experience.

The effects of pests and pathogens may have detrimental effects on forest diversity in the short term, as the range of species available decreases. The impact on diversity could be beneficial in the longer term if a wide range of novel species are planted, subject to the restrictions described above. 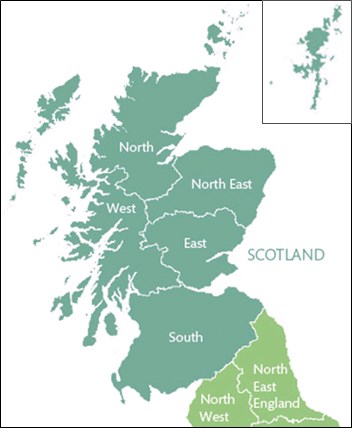 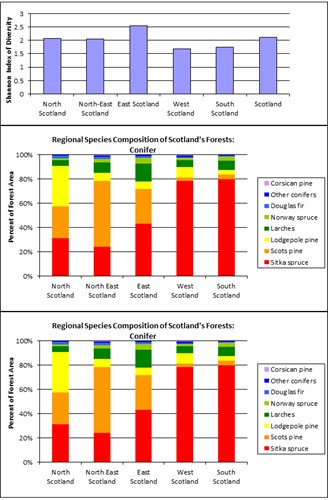 Sitka spruce accounts for almost 80% of conifer area in South and West Scotland. North East Scotland contains a higher proportion of Scots pine, and North Scotland has almost equal proportions ofSitkaspruce, Scots pine and lodgepole pine. Regional variations in soil type and climate account for much of the variation in species composition. In eastern parts ofScotlandconditions are frequently too dry for growingSitkaspruce and are more suitable for Scots pine. In northernScotlandit is common management practice to growSitkaspruce in self-thinning mixtures with lodgepole pine or Scots pine, as the high wind risk in these areas makes conventional thinning unviable. Instead, natural thinning takes place, as the slowing growing species will be outgrown bySitkaspruce. The diversity inNorth Scotlandwill therefore be lower than it appears, as the final crop will often be a single species.

These differences are reflected in the Shannon Index (Figure 4a), with East Scotland having a higher Shannon Index (2.54) and West and South Scotland the lowest scores (1.7).

Overall, forest tree species diversity has increased between 1995 and 2014 due to the increase in planted broadleaf forest. Species composition of the major commercial species does not appear to have changed greatly since 1995, withSitkaspruce occupying the same overall proportion of forest area. It is not possible to calculate Shannon Index values from the national inventory datasets forScotland, as records do not include a detailed breakdown for more novel species. Future analysis will identify subsequent trends in species diversity.

There are regional variations in species composition, with North East andEast Scotlandshowing the highest overall diversity. It is important to consider that regional diversity may be constrained by climatic conditions and available soil types.

The concept of increasing forest diversity for resilience to climate change is fairly recent, and the small changes seen in this dataset are likely due to other drivers. Woodland grants in the last 20 years have promoted native woodland planting, and this is evident in the rate of increase in broadleaf forest area. Changes in legislation affecting the areas where conifers can be planted, such as riparian areas, peatland and ancient woodland sites (Scots pine excluded), may account for the reduction in conifer forest area (Forestry Commission, 2011).

Changes to species composition are likely to occur slowly, as the rotation length in Scottish forestry is around 50 years for conifer species, and the rate of felling and replanting is currently around 1-2% of forest area annually. The management objective of large areas of Scotland’s forest is to produce timber, which limits the range of species choice. Any changes to the supply chain, including market demand, are likely to occur slowly. It is important that any changes in species composition are considered in light of the business needs of the sector, and any efforts in diversification are matched by research and investment into alternative timber species and wood products to support Scotland’s timber industry.

Species composition and Shannon Index figures in this Indicator are calculated at national and large regional scales, but does not account for diversity at smaller scales.

Thompson, I., Mackey, B., McNulty, S., Mosseler, A. (2009). ForestResilience, Biodiversity, and Climate Change. A synthesis of the biodiversity/resilience/stability relationship in forest ecosystems. Secretariat of the Convention on Biological Diversity, Montreal. Technical Series no. 43, 67 pages. Available at: https://www.cbd.int/doc/publications/cbd-ts-43-en.pdf

This indicator was written by Kate Beauchamp, Forest Research 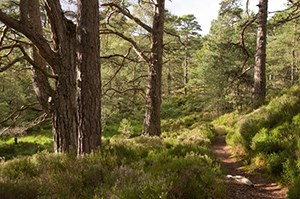