NF4 Diversity of tree species ordered for planting in Scotland

24.5 million conifer trees were ordered for planting in 2012. Sitka spruce was the most abundant species at 75%, followed by Scots pine at 8%.

The trend increasing slightly. The amount and species composition of ordered conifer planting has remained mostly constant, with small increases in the number of novel species. The number of broadleaf species ordered has increased.

Increasing the diversity of forest tree species grown in Scotland is a key adaptation strategy for building resilience to climate change related threats including pests and pathogen outbreaks, and an uncertain future climate. The area of forest felled and replanted, and area of new woodland created are both small in comparison to total forest area; therefore changes in species choice may not be visible through changes in the composition of all standing forests. Data for tree stock ordered from nurseries can shed light on the current situation regarding species planting choice and species diversification.

This indicator is based on two datasets:

Both datasets are utilised to provide a more detailed picture.

Figure 1 shows the species composition and number of planted conifer species in 2012 for both the public and private sector (CONFOR members). The survey found that 24.5 million conifer trees were planted.Sitkaspruce was the most abundant species at 75%, followed by Scots pine at 8%, Hybrid Larch at 6%, and Japanese Larch at 5%. 0.5% can be considered novel species. 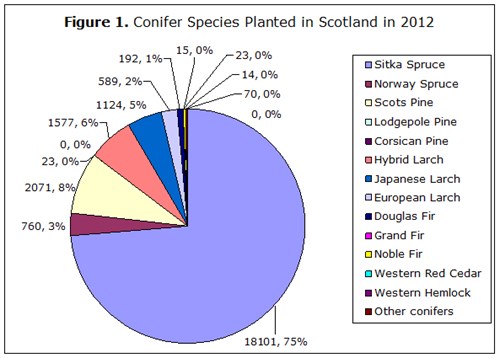 Survey results show that stock ordered by Forestry Commission Scotland was more diverse, with only 68%Sitkaspruce and 0.7% novel species, compared to 84%Sitkaspruce in the private sector and 0.2% novel. The results may be affected by the survey respondents asked, primarily CONFOR members, and also the lack of data for broadleaf species.

Data provided by Forestry Commission Scotland shows that of 18.3 million trees ordered by the public sector in 2013-14, 88% were conifer species and 12% were broadleaf species. Figure 2a shows the species composition of the conifer stock ordered. 18 different conifer species were ordered. The dominant conifer species wasSitkaspruce with 70% of all ordered stock, followed by lodgepole pine and Scots pine at 7% each. 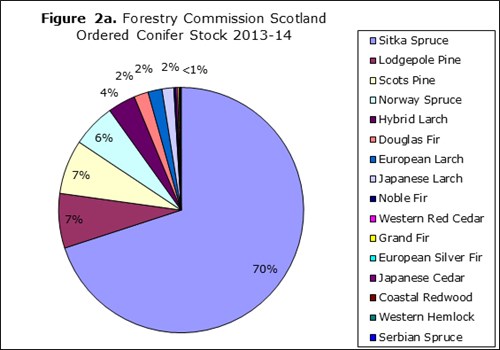 Figure 2b shows the species composition for all ordered broadleaf stock for the National Forest Estate in 2013. 25 different species were ordered. Broadleaf composition was more evenly distributed than conifer stock. Downy birch was the dominant species with 25%, followed by sessile oak with 17%. 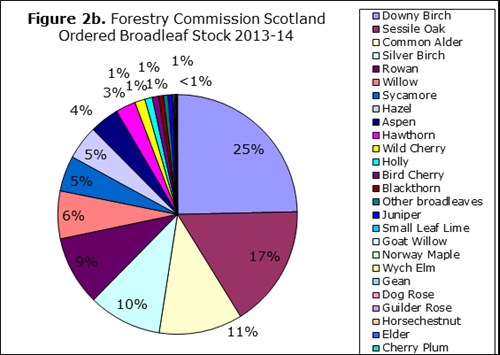 In the 2012 CONFOR survey, respondents were asked to provide historic data from 5 years before (2007). Generally the proportions planted were similar, although between 2007 and 2012 there was a decrease in the amount of lodgepole pine from 3% to 0% and an increase in the amount of larch (Hybrid, European and Japanese) from 7.5% to 13.5% in total, and small increases in the amount of noble fir, grand fir and western red cedar.

The area of broadleaf forest area has increased by over 90,000 hectares from 2005 to 2014 (Forestry Commission, 2014) therefore orders of broadleaf stock can be said to have increased, although the data is not detailed enough to allow comparison of species composition.

Survey respondents were also asked to forecast orders 5 years in to the future (2017). The proportion ofSitkaspruce and other standard species remained similar, apart from a reduction in Japanese larch from 4.5 to 1.8%, an increase in lodgepole pine to 3.5%, and further increase in the numbers of more novel species.

Additional surveys will be needed to identify trends. It is anticipated that the proportion of broadleaf species might increase in future, and that the proportion of Sitkaspruce would decrease as awareness of the risks of monocultures increases. Changes to species suitability and pest and pathogen outbreaks could negatively impact the diversity of tree species ordered, at least in the short-term, by reducing the range of species available. The proportion of Larch is expected to decrease, due to infection by the Phytophthora plant pathogen.

There are regional differences in the amount of stock ordered and the proportion of different species ordered on publically managed sites acrossScotland(Forestry Commission Scotland, data not shown). This is due to regional variation in forest area, species suitability (soil type and climate), management objectives and local management practices. Western and southernScotland, where large areas are managed for productive forestry, have a higher proportion ofSitkaspruce. The loss of Larch species in the West of Scotland due to Phytophthora infection may also have an impact.

The proportion of Sitka spruce is significantly lower in both northern and eastern Scotland. In eastern Scotland this is likely due to climatic conditions and soil types, which are suitable for high quality Scots pine, and the drier conditions which reduce the risk of Phytophthora infection of larch species, allowing larch to be planted. In northern Scotland this is likely due to the practice of planting self-thinning mixtures, where Sitka spruce is planted together with Scots pine, lodgepole pine or larch species, which will be out-competed by the faster growing Sitka spruce, leaving a pure final crop. This practice is important to consider in assessing the likely future species composition.

There is a small increase in the proportion of novel species being ordered by Forestry Commission Scotland, which may or may not be evident in the private sector. The species diversity of planted stock, especially in the private sector, is likely underestimated by the data shown (see Limitations section). Additional surveys will be needed to identify any trends and to survey a wider range of forest managers and forest types. There has been an increase in the area of broadleaf planting in recent years (Forestry Commission, 2014) and this is expected to continue to increase in future.

Although historical data are not provided in this template, the composition of ordered stock is likely to have changed in recent years due to the effects of forest tree pathogens. Recently there have been planting restrictions on Ash (Fraxinus excelsior) as a result of the Chalara fraxinea outbreak, and a reduction in the planting of Larch (Larix species) in Western Scotland, as a result of the Phytophthora ramorum outbreak.

When assessing species composition, it is important to consider the wide range of business and policy objectives which are provided by Scotland’s forests, which including biodiversity, recreation, productive forestry, carbon sequestration, and supporting a strong forest industry.

The CONFOR survey was only sent to CONFOR members, therefore a proportion of private sector woodland owners aren’t represented. The private sector response rate for Scotlandwas over 80%, and 100% of Forestry Commission districts replied. Broadleaf species choice was also not accounted for in the survey.

Regional data aren’t available from the survey; therefore data on national variation are only available for forests managed by Forestry Commission Scotland, which only accounts for around one third of forest area in Scotland.

Ordered stock data also includes ‘beat-up’ stock, where previously planted sites are topped up with additional plants to maintain the required stocking density in areas that have failed to establish. As there is a higher proportion ofSitkaspruce already planted, this will lead to higher proportions ofSitkaspruce being ordered in subsequent years.

The data don’t include other methods of regeneration, such as natural regeneration, continuous cover forestry and direct seeding. Therefore the diversity of future forests will be underestimated.

Both datasets are included to provide a more detailed picture of both public and private ordering and conifer/broadleaf planting. It should be noted that conifer planting by the public sector is included in both datasets, albeit for different years. 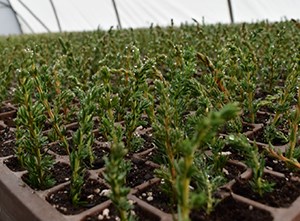