Phytophthora ramorum (Pr) is a fungus-like pathogen which causes serious damage and mortality to trees and other plants.  It thrives in mild and damp conditions such as those found in south-west Scotland (Forestry Commission Scotland, 2014a).  Climate change projections suggest that in the future the Scottish climate will be milder and wetter.  It is therefore anticipated that the risk of Pr infection in forests will increase unless significant adaptation actions are taken in the interim (Forestry Commission, 2015).

Japanese larch, an important timber species in Scotland, is particularly susceptible to Pr and can die within one to two seasons (Forestry Commission Scotland, 2014b).  Pr infected larch represents a risk to biodiversity, as Pr can infect other tree species and heath land plants such as blaeberry. Also, important gardens and designed landscapes contain vulnerable plants. Pr therefore has economic, environmental and amenity impacts (Forestry Commission Scotland, 2014b).

Since it was first detected in western Scotland in 2010, Pr has spread, most significantly in south west Scotland, where it is causing significant damage and mortality to larch trees and other plants.

No cure has been found for Pr and there are no effective chemical treatments currently available to treat it.  Policies and actions relating to the disease therefore focus on control to prevent or minimise any further spread of Pr and the damage it causes.  Scientific advice is to remove and kill the living plant tissue on which the organism depends for reproduction.  This means infected larch trees should be felled or killed as soon as possible after the disease has been found and before the next spring or autumn when sporulation begins on the needles (Forestry Commission, 2015).

Statutory Plant Health Notices (SPHNs) are issued by the Forestry Commission in Pr affected areas and require the felling of infected trees and those in a surrounding buffer zone.    SPHNs are part of a suite of biosecurity measures being used to prevent the spread and minimise the impact of Pr in Scotland and which are explained in the Forestry Commission Scotland ‘Action Plan for Ramorum on Larch in Scotland - 2013/14’ (Forestry Commission Scotland, 2014b).  The plan aims to ‘manage and control the rate of spread of Pr on larch to significantly reduce economic impacts to the forestry, nursery and ornamental garden sectors and to protect the health of trees and heathland’.  It includes actions on research, detection, precautionary measures, dealing with infected stands, and awareness raising measures.  It is part of a Great Britain wide approach to tackling the disease and supports the delivery of DEFRA’s Plant Biosecurity Strategy for Great Britain (DEFRA, 2014).

During the period 2014/15, 22 forest sites were issued with a SPHN for Pr and 0.13 thousand hectares of woodland were felled under these SPHNs (Forestry Commission, 2014).

The extent and rate of spread of Pr in Dumfries and Galloway creates an operational challenge for larch clearance and it is no longer considered feasible to use SPHNs for the felling of infected larch in this area.  The Plant Health (Forestry) (Phytophthora ramorum Management Zone)(Scotland) Order 2014 therefore provides ‘special arrangements’ for movement of larch within a designated ‘Management Zone’ (see Figure 1), along with statutory controls on any potentially infectious timber and timber products leaving the area (Forestry Commission Scotland, 2014b). SPHNs continue to be issued for infected larch outwith the Management Zone. In 2014 SPHNs were strengthened to require felling of infected stands of larch and all larch within a 250m buffer zone Forestry Commission Scotland, 2015).

See Figure 1 for a map of Pr outbreaks in Scotland.  The map shows sites for which SPHNs have been issued and sites where an infection of Pr is suspected. 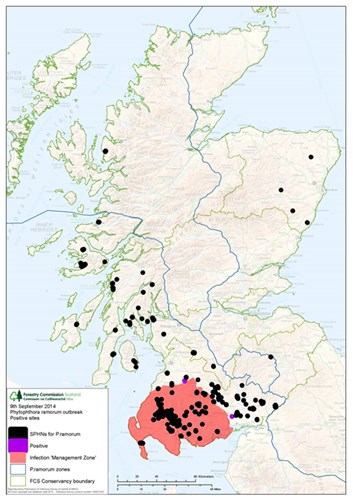 The number of SPHNs issued, and area of forest felled under SPHNs, have both seen as increasing trend since 2010, shown in Tables 1 and 2, although the lower number of new sites served with SPHNs post 2012/13 may indicate a slowing of the spread of Pr outside the core infected area in Dumfries and Galloway.

Table 1. Number of forest sites where a SPHN has been served for Phytophthora ramorum

The core area of Pr infection is in the south-west of Scotland.  Other infected sites are in Argyll and Aberdeenshire (see Figure 1 for a map of Pr outbreaks in Scotland).

The increasing number of forest sites where SPHNs are being issued for Pr and the increasing area of forest felled under these SPHNs reflects the increasing spread of Pr in Scotland between 2010 and 2013 and the increasing scale of actions being taken to try to prevent the spread and minimise the impacts of the disease.  The reduction in the number of sites issued with an SPHN for Pr and reduction in felling areas under these SPHNs since 2012/13 would suggest that the spread of Pr outwith the core area of infection Dumfries and Galloway has slowed, however the number of new SPHNs issued each year show that it is clearly still a significant problem.  As noted below, these figures do not provide information on the extent of action to address the core Pr infection in Dumfries and Galloway.

It should be noted that the indicator used here, the number of forest sites where an SPHN has been served, differs from the number of SPHNs issued. This is for various reasons, for example a single SPHN can cover multiple sites, and conversely a single infection and the surrounding buffer zone may give rise to several SPHNs if multiple owners are involved. The number of forest sites is considered to be a better indicator of the spread of Pr infection.

SPHNs are not being issued to control the felling of larch within the ‘Management Zone’ in Dumfries and Galloway – the core area of Pr infection in Scotland. As such figures relating to SPHNs noted above do not reflect the full scale of action to fell infected larch trees in Scotland. This may contribute towards the lower number of SPHNs issued and smaller area of forest felled under SPHNs in 2013/14 and 2014/15, compared to 2012/13. 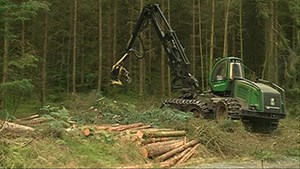