Climate change projections indicate milder and wetter winters in Scotland; this could exacerbate the risk of Pr infection becoming more widespread, as it thrives in mild, damp conditions (Forestry Commission, 2015). There is no cure for Pr and therefore actions to tackle the disease are focussed on preventing the spread and reducing the impacts of the disease (Forestry Commission, 2015).

This indicator monitors the extent of Pr infection in forests in Scotland with a view to providing a gauge of the likely impacts of the disease on the forestry sector, and in turn, to provide a context for understanding the scale and effectiveness of actions to reduce the spread of Pr.

The main area of forest affected by Pr in Scotland is in the south-west.  By the end of 2013, Forestry Commission Scotland estimated that 5000 - 6000 hectares of larch were infected with Pr in Dumfries and Galloway (Forestry Commission Scotland, 2014a).  Prior to this, aerial surveys in May and early June 2013 revealed around 4,000 – 6,000 hectares of infected larch (Forestry Commission Scotland, 2014b2014c). The significant expansion of outbreaks in Dumfries and Galloway in 2012 and 2013 followed a wet autumn and mild winter in 2011/2012 then extremely wet and windy conditions in summer and autumn 2013. This expansion in the extent of outbreak has led to the establishment of a PrManagement Zone which is subject to statutory controls.

The UK has been divided into 3 risk zones depending on level of risk from Pr infection (the Management Zone subject to statutory controls is within Zone 1) (Forestry Commission Scotland, 2015). The area of larch within the area at highest risk is monitored in Indicator NF8 ‘Proportion/area of larch within Phytophthora ramorum Risk Zone 1’. 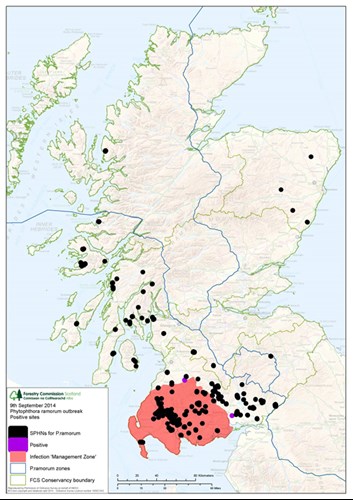 Prior to 2009, Pr was limited in its extent and impact in the UK.  However during 2009 it was found infecting and killing large numbers of Japanese larch trees in South West England.  In 2010 it was found on Japanese larches in Wales, Northern Ireland and the Republic of Ireland, and in Scotland at one site on the Craignish peninsula. During 2011 further infection sites were found on Mull and in Dumfries and Galloway.

Since 2012 Pr has continued to progressively expand, most significantly in south west Scotland.

Forestry Commission Scotland state that ‘eradication of Ramorum on larch in Scotland is no longer achievable and the aim now is to contain and slow down new outbreaks’ (Forestry Commission Scotland, 2014c) through biosecurity measures and supporting legislation. An example is the use of SPHNs; see the action indicator NF11/NF12 ‘Number of forest sites served with a Statutory Plant Health Notice (SPHN) for Phytophthora ramorum / Area of forest felled under Special Plant Health Notices (SPHNs) for Phytophthora ramorum’ for further information.

There are concerns about the potential for Pr infection of other species, both in commercial forestry and affecting wider biodiversity. Sitka spruce may be susceptible and a small number of cases have been reported. An infected European larch was found in England in 2011; however it is not yet known how susceptible this species is. While no infections have been found in hybrid larch, its biological similarity to Japanese and European larch means it may well be susceptible to Pr (Forestry Commission, 2015).

Shrub species such as Rhododendron and Viburnum, along with woodland and heathland plants such as blaeberry are all susceptible to Pr infection. Rhododendron ponticum is of particular concern because of its extent in woodlands, and because Pr sporulates when on Rhododendron (produces spores that can then spread infection to other shrubs and trees) (Forestry Commission, 2015). There is also special concern about the infection of blaeberry, due to its ecological importance in heaths and woodland (Forestry Commission, 2015).

The most extensive area of forest affected by Pr in Scotland is in Dumfries and Galloway; other infected sites are in Argyll and Aberdeenshire (see Figure 1 for a map of known Pr outbreaks in Scotland).

The expansion of the area of forest infected by Pr, particularly in Dumfries and Galloway, is thought to be a result of wet autumnal conditions and a mild winter in 2011/12 (being a fungal pathogen it favours damp and mild conditions) (Forestry Commission Scotland, 2014c).  The considerable spread of the disease in Dumfries and Galloway may also reflect the genetic characteristics of Pr in that area (Forestry Commission Scotland, 2014c). The outbreak of Pr on larch in the UK has been linked to two genetically distinct lineages, known as EU1, which is widespread, and EU2, which was identified relatively recently and has been found only in south-west Scotland and Northern Ireland (King et al, 2015).

The figures presented are estimates of the area of forest infected by Pr but do relate mainly to the core area of Pr infection in Scotland in Dumfries and Galloway. 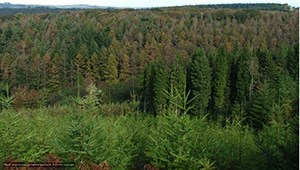