This approach to delivery of land use and environmental strategies has some important benefits. The large scale of projects enables them to capture ecosystem interactions that are often outside the scope of traditional site-based land management.  The need for this large scale approach has become apparent with the increasing focus on an ecosystem approach, and delivery of ecosystem services, in the Scottish Government’s land use policy; with the Scottish Biodiversity Strategy and Scottish Forestry Strategy both recognising the need for landscape scale restoration (Adams, 2012). LSC enables integrated land use and collaborative land management, while encouraging community engagement and providing opportunities for recreation and tourism. It also complements other landscape-scale approaches to land use planning, such as agri-environment and river basin management schemes (FCS, 2014).

Across the UK, LSC projects have been developed, including the Wildlife Trusts’ ‘Living landscapes’, RSPB ‘Futurescapes’ and Butterfly Conservation’s ‘Landscape Target Areas’ (University of Cambridge, 2013).

LSC provides some benefits that are particularly important in the context of climate change. It can enable the creation of larger and linked areas of semi-natural habitat, helping reverse habitat fragmentation that limits the ability of species to track changing climate space.

‘ …in the context of climate change, a landscape-scale approach appears to be the best option for creating the habitat heterogeneity likely to be needed for species with changing ecological requirements as well as providing the opportunities for them to move through the landscape’ (Ellis et al, 2012).

LSC can also help in flood control and can help sustain and increase carbon sequestration, particularly in peatland and woodland. It enables adaptive management that is flexible and can respond to change, including climatic change. The ability to capture ecosystem interactions, integrate management and plan over the long term enables the building of more resilient ecosystems that are better able to withstand climate change.

LSC projects include ecosystem restoration (also known as Landscape Scale Ecosystem Restoration, or LSER) but also broader landscape scale conservation projects involving other land use and general land management activities. Only ecosystem restoration projects contribute to the Aichi target (Target 15) included in the ‘2020 Challenge for Scotland's Biodiversity’ which states ‘By 2020, ecosystem resilience and the contribution of biodiversity to carbon stocks has been enhanced, through conservation and restoration, including restoration of at least 15 per cent of degraded ecosystems, thereby contributing to climate change mitigation and adaptation and to combating desertification’ (Scottish Government, 2013).

This indicator only uses data on ‘potential’ LSER projects, collected by Forestry Commission Scotland, as currently no data is available quantifying broader LSC projects. However, LSC projects that do not focus on habitat restoration are included within the narrative as they can also contribute to more resilient ecosystems and therefore to adaptation to climate change.

There are 30 to 40 projects in Scotland that can be defined as potentially LSC (see Forestry Commission Scotland, 2014 for a full list of projects).  These range in size from very large projects such as the Coigach – Assynt Living Landscape Project covering over 60,000 ha through to smaller projects such as the Clyde Valley Woodlands that covers 320 ha along a 12 km stretch of gorge.  These projects are run by a range of organisations including conservation charities, government agencies, private estates and community groups.

For most projects only an estimate is provided of the area covered, so the total land area under LSER cannot be accurately determined. 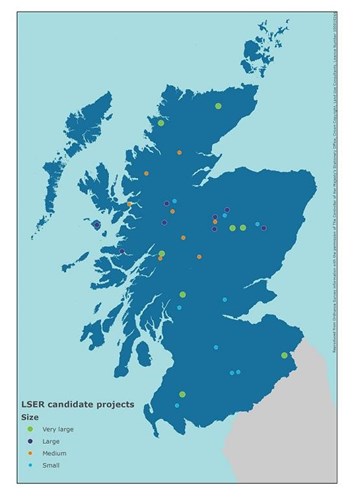 There is a long established practice of large scale protected conservation areas in Scotland (Adams, 2012). The first National Nature Reserve (NNR), Beinn Eighe in Wester Ross, was established in 1951 covering 5,000 ha encompassing lochside to mountaintop (Scotland’s National Nature Reserves, 2015). The Isle of Rum NNR, set up in 1957, covers 10,000 ha. Restoration work at Glen Affric began in 1951. However, the majority of schemes listed by FCS started in the 1980s or more recently, indicating an increase in the area of land under Landscape Ecosystem Conservation projects over the last twenty to thirty years (FCS, 2014).

With a strong policy emphasis on ecosystem scale habitat restoration it is likely that the area under such projects will increase in the future. However, continued funding will be critical, with many projects reliant on public funding in various forms, such as conservation grants or payments to landowners. In particular, continued funding through the Scottish Rural Development Programme is vital for the success of many projects (Adams, 2012).

Other sources of funding include landowning charities such as the John Muir Trust. The Great Trossachs Forest project is run by the Scottish Forestry Alliance, a collaboration including the Forestry Commission for Scotland, the Woodland Trust Scotland and the RSPB, that also receives corporate funding from BP. Climate change was a key driver in BP’s £10 million investment and they own the rights to any potential future carbon credits accruing to the project (FCS, 2014).

Strong support for native woodland restoration is likely to help drive expansion in the number of upland LSC projects encompassing woodland, heathland and montane habitats, while there is scope for LSC collaborative agri-environment and green network approaches (FCS, 2014).

FCS note that some private land owners have bought estates in order to set up LSC projects, a trend they expect to continue, while there is also potential for projects centred around natural flood control (FCS, 2014).

Of the LSC projects identified by FCS (2014), 23 are on land under single ownership and 9 are multiple owner partnership projects.  Of those, 6 are led by non-governmental organisations and 3 by government agencies. A further two, the Great Trossachs Forest and the Cairngorm forests, are ‘aggregate projects’ involving several projects that have come together to form a large partnership.

Geographically, projects are located throughout Scotland. There is a concentration in the eastern and central Highlands that is likely a result of the existence of large areas of semi-natural habitats, especially native woodland, and large land holdings in these areas. Land in the Highlands also incurs lower opportunity costs than agricultural land in some other parts of Scotland, which makes LSC projects more feasible economically (FCS, 2014).

Although not included in the FCS list of potential projects, or the associated statistics used to inform this document, Adams (2012) describes the Central Scotland Green Network as a ‘Network of Reconstruction’ type of Large Conservation Area. The Central Scotland Green Network covers one million hectares (10,000 km2). Located in Scotland’s more populous central belt the focus is on restoration of post-industrial landscape and includes concern for people along with biodiversity and habitat restoration. The network involves multiple partners led by Scottish Natural Heritage (SNH) and FCS and aims to create an integrated habitat network with strategic sites and habitats linked by wildlife corridors (Adams, 2012). The Inner Forth is a noteworthy site where the RSPB Futurescapes project is restoring wetlands centred on Skinflats Nature Reserve (Adams, 2012), adjacent to the Helix project that provides green space for recreation, shared access paths connecting communities, public art, semi-natural habitat and reconnects the Forth and Clyde Canal to the River Forth with a kilometre of new canal (The Helix, 2014).

Evidence shows that the LSC approach can be very successful for species conservation. ‘Butterflies and moths respond very rapidly to landscape-scale conservation and projects focused on a single butterfly or moth can and do benefit a suite of other species which have broadly similar habitat requirements’ (Ellis et al, 2012).

A Butterfly Conservation case study focused on the Marsh Fritillary Euphydryas aurinia, a species associated with extensive farming systems in Argyll and the Isles, demonstrated the benefits of partnership working. The species is reliant on a range of well-connected habitat patches associated with traditional agricultural practices in the area, and generally not within designated conservation sites. Because the sites used by the Marsh Fritillary are non-uniform, site-specific advice is required. The project was a success, in large part due to the presence of a Specialist Advisor to provide site-specific advice and liaise with stakeholders. Argyll’s Marsh Fritillary population was already regarded as a high priority under Rural Priorities, part of the Scottish Rural Development Programme (SRDP). The project enabled farmers to claim more than £2m, improving the viability of farming in a marginal area and benefitting the local economy (Prescott, T., cited in Ellis et al, 2012).

By nature, LSC projects are long term; they take considerable time to establish and are designed to run for many years. For example, the Great Trossachs Forest project has a 200 year timescale, including a research and monitoring programme (FCS, 2014).

Lack of precise information about the area under LSC, and in particular lack of historic information including when LSC projects were established, prevents the identification of trends. However, the potential projects identified by FCS (2014) show an increase from the 1980s and an apparent acceleration in that increase since 2000. The FCS (2014) survey of existing projects provides a baseline that will enable future trends to be assessed.

In future, an increasing area of land under landscape scale conservation would suggest that adaptive actions are being taken that have the potential to increase the resilience of Scotland’s habitats and ecosystems to climate change.  The results of expansion of LSC may be monitored in future using indicators such as:

The data used to inform this indicator was gathered by Forestry Commission Scotland in consultation with land managers and other stakeholders.  It does not represent a complete list of all Landscape Ecosystem Restoration Projects in Scotland.  As such figures provided are likely to be an under estimate.  The figures on area covered by each project are estimates.

Figures vary depending on the definition used for an LSC project; for example, Adams (2012) includes projects such as the Central Scotland Green Network that covers a vast area, but this is not included by FCS. The areas considered in the figures here are areas under landscape-scale ecological restoration. There are much larger areas within landscape scale conservation projects that are not the subject of habitat restoration (and therefore not contributing towards Scottish Biodiversity Strategy targets, such as the 15% ecosystem restoration Aichi target) but that are managed under a landscape scale conservation approach.

The FCS data provides a ‘snapshot’ of projects; there are no current plans to update the data, although this is possible in future if resources are made available (Sellars, 2015).

Scottish Government (2013) 2020 Challenge for Scotland's Biodiversity - A Strategy for the conservation and enhancement of biodiversity in Scotland. (Online). Available at: http://www.gov.scot/Publications/2013/06/5538 (Accessed June 2015)

Forestry Commission Scotland provided the list of projects, their estimated area and the background information that informs most of this document. 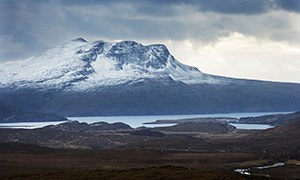 Photo: Murdo MacLeod for the Guardian