Latest figures
Trend
Download the full indicator card
At a glance
Why is this indicator important?

Scotland’s native woodlands are an important part of our ‘natural capital’ (Scottish Government, 2013). Providing habitat for many of Scotland’s rare and threatened species, they are highly valued for their biodiversity. They also supply a wide range of beneficial ecosystem services, including timber and other forest products, improved flood control, reduced soil erosion, improved air and water quality, shelter for livestock and carbon sequestration. Native woodlands constitute part of our cultural heritage. Today they provide a valuable resource for recreation and tourism, and offer opportunities for improving physical and mental wellbeing (Forestry Commission Scotland, 2014).

Although there have been considerable efforts to protect and enhance native woodlands since the 1980s, they remain under pressure from multiple sources including non-native tree planting, fragmentation, invasive non-native plants and animals, plant pests and diseases and deer browsing.  Climate change and atmospheric pollution are additional stressors (Forestry Commission Scotland, 2014). The Scottish Government recognises the importance of restoring native woodland flora displaced by invasive species such as rhododendron (Scottish Government, 2013).

Invasive non-native species (INNS) refers here to non-native plant species that have been introduced to an area by various mechanisms and have proliferated to a problematic extent. INNS have the potential to threaten the biodiversity of native woodlands in Scotland. They can inhibit growth and suppress natural regeneration of native species, creating a pressure on native woodlands that, along with other potential stresses, may make them less able to cope with the effects of climate change. INNS are recognised as major factors contributing to the vulnerable state of some types of native woodland, including upland mixed ashwoods, upland oakwoods, native pine and lowland mixed deciduous woodland (where non-native trees are also an important factor).

This indicator monitors the extent of native woodlands affected by INNS in Scotland, providing a partial measure of the impact of invasive species in native woodlands and a proxy of their impact on biodiversity.  It draws on data gathered in the Native Woodland Survey Scotland (NWSS), specifically the number of woodland units (polygons) surveyed where INNS were present.

Data is categorised by species for the INNS most commonly found in native woodlands in Scotland.  Other INNS are presented in a separate category, ‘Other herbaceous invasive exotics’.  Non-native tree species were not recorded as invasive species (however they were noted as part of the assessment of woodland species composition and structural diversity). 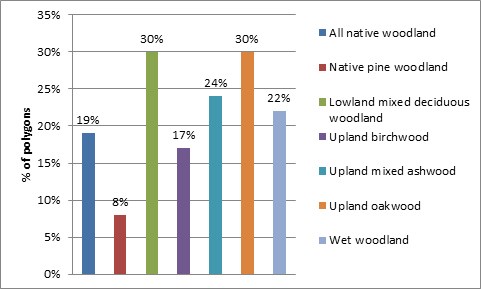 Figure 1:  Extent of presence of invasive non-native species for each priority woodland type

Figure 2 shows the extent of particular INNS frequently found in native woodlands.   Rhododendron ponticum is the most widely established of the INNS assessed.

Legislative support for controlling INNS is provided by The Wildlife & Natural Environment (Scotland) Act (2011), which makes it an offence to ‘plant or cause any non-native plant species to grow in the wild’ (Parrott & MacKenzie, 2013).

Non-native invasive plant species can be imported by various mechanisms such as transportation of agricultural products, trading in exotic plants, freight and movement of travellers. Most plant INNS in Scotland have escaped from gardens. Once they become established in the wild, they are spread by soil and water movements and also on clothing and equipment (SNH, 2012).

Rhododendron ponticum is recognised as ‘the most damaging and widespread non-native terrestrial plant in Britain’ (Parrott & MacKenzie, 2013). The rhododendron, native to south-west Europe and south-west Asia, was introduced to the UK in the late 18th century (NNSS, 2015).

Concern about negative impacts including ecological damage, restricted access and damage to commercial plantations grew in the 1930s and various control methods were tried. Some control programmes started in the 1930s are still ongoing and no control programme has recorded complete eradication of rhododendron at a landscape scale (Parrott & MacKenzie, 2013).

Since the mid-1990s there has been a significant increase in the scale of rhododendron clearance efforts, helped by targeted funding though EU LIFE Nature Programme[1], EU Objective 1[2]/European Regional Development Fund[3], Scottish Forestry Grants Scheme[4]/Scottish Rural Development Programme[5] and Scottish Natural Heritage discretionary funds[6]. The LIFE project was targeted specifically at restoring Atlantic oakwoods and included a 6 year control programme at Sunart and Loch Maree. There is particular concern over Rhododendron as it can harbour the Phytophthora disease organism which threatens woodland (Parrott & MacKenzie, 2013). It is also a particular threat to the internationally important bryophyte and lichen floras of Scotland’s Atlantic oakwoods (Long & Williams, 2007, cited in Parrott & MacKenzie, 2013).

Japanese knotweed Fallopia japonica, native to Japan, was introduced to Britain as an ornamental plant in the 19th century. It is a tall herbaceous perennial that tends to grow in dense thickets. It spreads in the wild by fragments of root or stem, and also is spread by human activity (NNSS, 2015).

Giant Hogweed Heracleum mantegazzianum, native to south-west Asia, was also introduced as an ornamental plant and was recorded in the wild in the UK in the early 19th century. It spreads only by seed, through deliberate planting, wind and water dispersal. It tends to form dense stands, crowding out native flora (NNSS, 2015).

Himalayan balsam Impatiens glandulifera, a native of the west and central Himalaya, was introduced as a garden plant in the early 19th century and rapidly spread to the wild. It spreads by seed, which are easily dispersed either by wind or water. It out-competes natives especially along river banks. Growing densely along river banks it increases flood risk during high rainfall events when it impedes flow (NNSS, 2015). It may also divert pollinating insects away from native flowers (SNH, 2012).

Snowberry Symphoricarpos albus is a native of western North America introduced to Great Britain in the early 19th century by gardeners. Later in the 19th century it was used to provide cover for game. It spreads locally through suckering and is naturalised throughout Britain, except the north of Scotland. A vigorously growing, dense invasive shrub, it shades out most native species (NNSS, 2015).

Japanese knotweed, giant hogweed and Himalayan balsam are all dispersed by water and often grow alongside rivers and streams. Their impact on ecosystems and on habitat structure can restrict access and have a direct impact on salmonid fisheries (NNSS, 2015).

No historic data are available to allow trends to be identified; however the NWSS provides an authoritative baseline against which future trends in the presence of INNS can be monitored.

Whilst INNS are a locally important threat in certain areas, the threat to woodlands from herbivores and the resultant impacts on natural regeneration are currently of greater concern in relation to their impact on the ability of native woodlands to cope with climate change. However, as 19% of all surveyed native woodlands had INNS present, there is a widespread source of plant material, suggesting continued remedial action is necessary to reduce the risk of further spread. 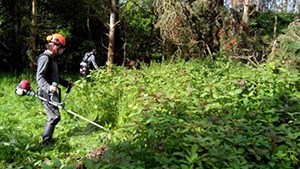