Largely confined to less-fertile soils, Caledonian pinewoods typically support a lower diversity of plants and animals than more fertile woodland types; however they do support species with very limited ranges. Iconic bird species such as the capercaillie and black grouse, as well as Britain’s only endemic bird species, the Scottish crossbill are to be found in these woods, along with important ground flora, invertebrates and fungi. As a consequence, native pine woodlands are included in the Scottish Biodiversity List of habitats and species considered to be of principal importance for biodiversity conservation in Scotland and have been listed as an endangered habitat in the EC Habitats Directive (SNH, 2014).

It is estimated that post-glacial natural forests, at their maximum extent (approximately 4,000 years ago) covered approximately 1.5 million hectares (ha) of the Scottish Highlands. Pine trees were a critical, dominant component of these forests, often occurring in association with birch and other deciduous species. Over the centuries large areas were cleared and regeneration prevented by both grazing as well as replanting with other species. Currently, less than 18,000 ha remain of core Caledonian pinewood, primarily made up of Scots pine along with a range of other trees, including junipers, birches, willows, rowan and aspens (Forestry Commission, 2014). For a detailed definition of woodland classified as Caledonian pinewood see Forestry Commission (1998).

Whilst remaining Caledonian pinewoods are now well protected from further clearance, these pinewood areas are still susceptible to other pressures such as the pests and pathogens that threaten other forestry areas.

The fungal disease Dothistroma needle blight (DNB), often referred to as ‘Red Band Needle Blight’, has become the most significant disease affecting coniferous trees in the UK. The fungus affects the needles of the infected tree, which eventually shed. As well as generally weakening the trees, it can also eventually lead to mortality. Whilst it was first recorded in the UK in the 1950s, it was not known in Scotland until 2002. Although non-native species such as Corsican and Lodgepole pine are more highly susceptible, it is being increasingly detected in Scots pine stands (Forestry Commission 2010).

Although it is currently not clear to what extent changing climate is contributing to the spread of DNB, it is thought that an increase in intense rainfall episodes coupled with warmer springs may have optimised conditions for spore dispersal and infection (Brown & Webber, 2008). Long distance dispersal of the fungus is believed to occur via moist wind and mists; therefore proximity to known locations of the disease is a vulnerability factor when assessing the risk to Scotland’s native pine woodland. The indicator utilises the Caledonian Pinewood Inventory and annual DNB surveys of the Forestry Commission Scotland National Forest Estate (NFE) to calculate the proportion and area of woodland which lies within 1km of a known outbreak of DNB. Although the data covers the NFE only, changes in the abundance of DNB in these areas is likely to be indicative of DNB abundance across Caledonian woodland in Scotland as a whole.

The latest available figure shows that 9% (1614 ha) of all (core) Caledonian Pinewood lies within 1km of known DNB infection (Figure 1). ‘Core’ areas are those which already contain fragments of Caledonian pinewood, however it is also critical to examine the risk to ‘regeneration zones’ which typically extend 100 m from pinewood fragments and represent areas into which it could be expected that the woodland would naturally expand. ‘Buffer zones’ typically extend a further 500 m, and are intended to protect the pinewoods’ genetic integrity (only native genotypes of Scots Pine should be planted in these areas) - exposure to DNB in these areas can provide advance warning of a potential threat to the core Caledonian pinewood. Figure 1 shows the extent of exposure to these critical areas also. 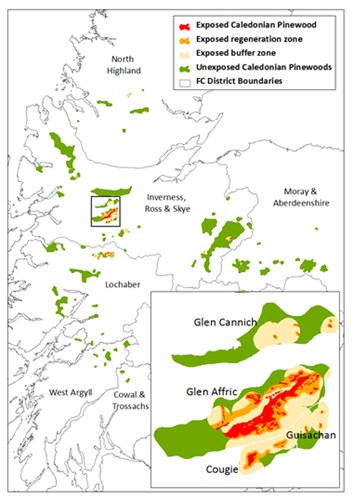 Table 1 provides further detail of the exposure of individual pinewoods. This shows that approximately two-thirds (1086 ha) of this exposure is in one woodland area, Gen Affric (see Figure 1 insert).

Many Caledonian pinewood areas have until recently had a poor regeneration record, and there is concern that impacts of DNB on young trees could further threaten the age class structure, and hence continuity of these woodlands (Forestry Commission 2012). Mature pine in Caledonian pinewoods currently appear to be less susceptible to the disease but there is concern that this could change as there is considerable potential for genetic exchange due to the presence of two mating types, a high number of genotypes of Dothistroma septosporum, and the possible introduction of D. pini, which is responsible for DNB in North-Central America, Russia, Ukraine, France and Hungary (Forestry Commission Scotland 2013).

The Forestry Commission DNB surveys have taken place annually since 2006. Using a comparison date of 2007 (accumulative with 2006) shows that only one Caledonian pinewood area was at that time within close proximity of known DNB infection- Glenmore (in the western area of the Inverness, Ross and Skye district) (see Table 1).

In 2011, the disease was found in Abernethy, an RSPB-owned native pinewood, bringing to the fore the threat to native pinewoods (Forestry Commission, 2012).

As the DNB affected area increases, there will be an associated increase in the area of woodland at risk of infection due to proximity to infected trees. In addition to the currently exposed core area of Caledonian pinewood, a larger area of important, connected land is also already exposed: regeneration zone (2970 ha) and buffer zone (12345 ha), these areas are potentially critical to enable natural regeneration and expansion of the native woodland.

To help limit the spread and potential impact of DNB on Scottish forestry the FCS Dothistroma Needle Blight Action Plan, addresses risks to both biodiversity and commercially important forestry. As well as increasing awareness, research and detection effort, the action plan also covers preventative measures including buffer zones around Caledonian pinewoods (FCS, 2013). It is recommended that no pine species be planted within 600m of core native pinewood areas.

Despite the earliest detection of DNB in the proximity of Glenmore, there has been a relatively small increase in the amount of exposed Caledonian pinewood in this area. By far the greatest change has been as a result of the detection of DNB infection in a wide area in and around Glen Affric (Fig. 1, Table 1)

Table 1 Exposure of core Caledonian pinewood to DNB infection. Exposure is based on proximity of 1km to detected infection (detection survey for the NFE only).

There has been a rapid increase over the last 6-7 years in the potential exposure of Caledonian pinewood to DNB infection due to proximity to known outbreaks. Whilst this is partially a result of the increase in surveyed area/effort, it also reflects the rapid increase in infected areas across Scotland.

The current extent of all pine woodland in the NFE that is known to have been infected with DNB is 13722 ha, from 1661 infected sub-compartments (for more detail see associated impact indicator ‘NF9 Forest extent affected by Dothistroma needle blight ’). Whilst reasons for the increase in the disease are presently unclear, there is some evidence to suggest that increased rainfall in spring and summer coupled with a trend towards warmer springs is optimising conditions for spore dispersal and infection (Brown and Webber, 2008).

The increase in geographic extent and intensity of the disease across the whole of Britain is probably due to a combination of factors including an increase in favourable climatic conditions, as well as availability of suitable hosts, a genetically diverse fungal population, and movement of the pathogen through the plant trade.

There is still uncertainty regarding the susceptibility of Scots pine. Whilst it is still seen as being less susceptible than some other pine species, increasing levels of infection and mortality are being detected in commercial forestry. Even less is currently known regarding the susceptibility of native Caledonian pinewoods, though there is some evidence to suggest a greater susceptibility amongst younger trees (though this may be a reflection of the relative difficulty in sampling the crowns of mature trees) (Confor, 2013).

for the Forestry Sector. DEFRA. Available online at: http://www.defra.gov.uk/environment/climate/government/ 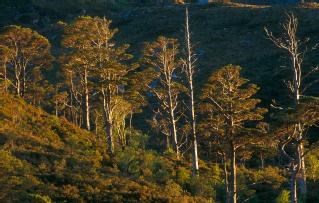