SCCAP objectives:
N2 Support a healthy and diverse natural environment with the capacity to adapt

36% of all groundwater and surface water bodies do not meet Good Overall Status (SEPA, 2016)

*Proportion is based on numbers of sites

Data is for both the Scotland and Solway Tweed River Basin Districts.

Scotland is renowned worldwide for the environmental quality of its water resources.  Its water habitats support a great diversity of habitats and species, and some of these are of national and international importance.  They also provide benefits essential to Scotland’s health and prosperity for example, by providing drinking water, water for use in industries such as whisky making and fish farming, energy from waves, tides and hydropower, and recreation opportunities.  Scotland’s water environment is an ‘integral part of Scotland’s cultural fabric’ (Scottish Government, 2009).

Projected climate change will have significant direct and indirect impacts on Scotland’s water environment e.g. rising mean water temperatures and an increase in extreme temperature events; an increase in high intensity rainfall events and/or summer low flows. The ability to withstand these additional stressors and maintain important ecosystem functions will to a great extent depend upon their general condition. The Scottish Government (2013) identify the need to improve the condition of the water environment in order to make it both more resilient in itself to the consequences of climate change as well as to provide a healthy resource that can  benefit wider climate change adaptation.

The monitoring of the status of Scotland’s water environment is a requirement of the European Water Framework Directive and is carried out on behalf of Scottish Government by the Scottish Environment Protection Agency (SEPA).  The Directive requires a broader and more holistic approach to the monitoring of water quality than previously. Under this monitoring, water management units, otherwise known as ‘water bodies’ are identified. Each year, each water body’s overall status is classified as being either:  High, Good, Moderate, Poor or Bad.  The purpose of the classifications is to show where the water environment is in a good condition and where improvements need to be made.  The classification of surface water bodies shows how much their condition differs from near natural conditions, with water bodies in a near natural condition being of High status and those whose ecological quality has been severely damaged as in Bad status.  The classification of groundwater describes whether or not waters are polluted and whether or not the volume of any water abstracted from them is sustainable. Two classes are used to describe the status of groundwater - Good and Poor.

This indicator reports on the proportion of water bodies not meeting Good Overall Status, in other words, those classified as being in Moderate, Poor or Bad status under SEPA’s classification system (see below for details).  This indicator is important as it provides an understanding of the likely resilience of water bodies to the pressures of climate change, with those not meeting Good Overall Status likely to be less resilient than those which do meet this standard.

Approximately 46% of Scotland’s rivers and 36% of lochs are currently failing to reach ‘good’ status (Figure 1).  This is largely due to loss of habitat as a result of development (historic and ongoing); nutrient enrichment and habitat loss due to agriculture; and energy production disrupting the natural movement of water (Critchlow-Watton et al, 2014). Since the previous year (2015), 83 rivers and 4 lochs have deteriorated in assessed status, whilst 89 rivers and 8 lochs have improved in condition.

Estuaries and particularly coastal waters show a significantly better picture with regard to water quality, with only 15% of estuary sites and less than 1% of coastal assessment sites remaining in less than good status (Figure 1). The main challenges faced by the coastal and transitional environment are: commercial fishing; localised pollution due to the aquaculture industry; loss of coastal and estuary habitat to development; and diffuse pollution of estuaries and coastal areas (Critchlow-Watton, 2014).

Approximately 21% of groundwater bodies are currently assessed as not reaching good status. These water resources are largely under pressure from agricultural inputs; water abstraction; pollution from historic mining and industrial activities (Critchlow-Watton, 2014). 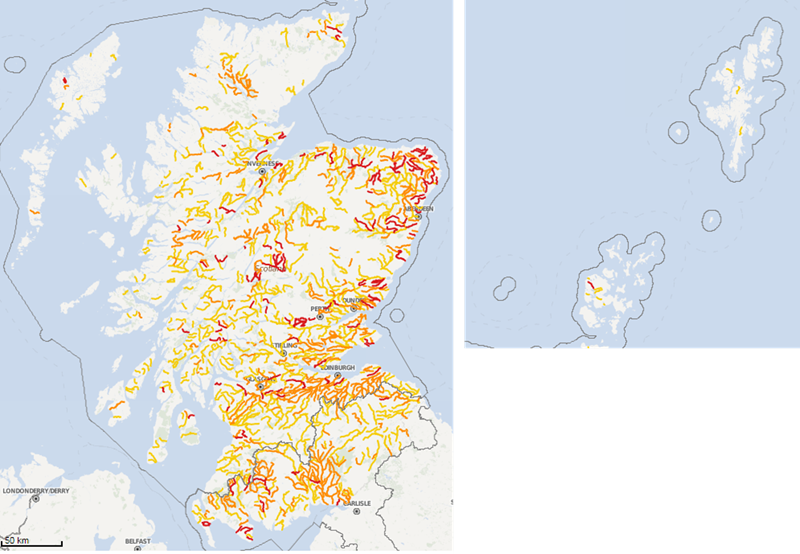 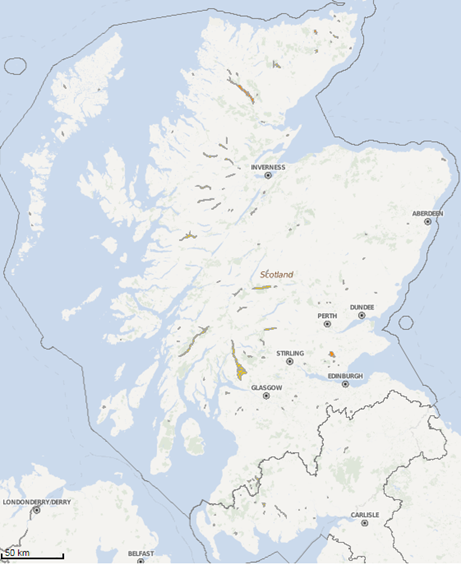 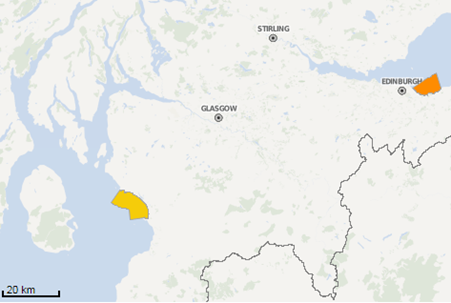 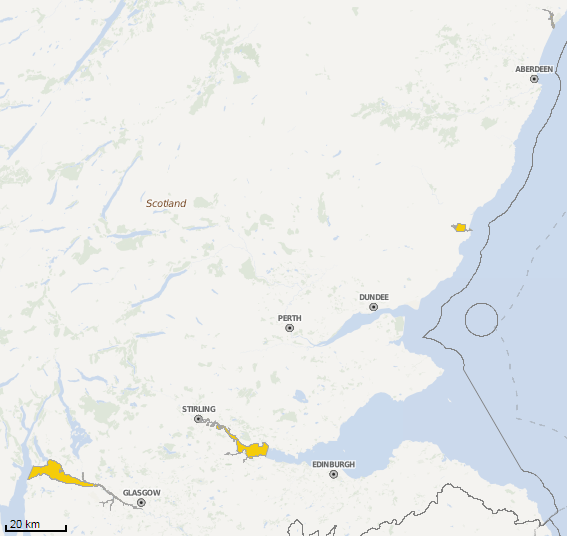 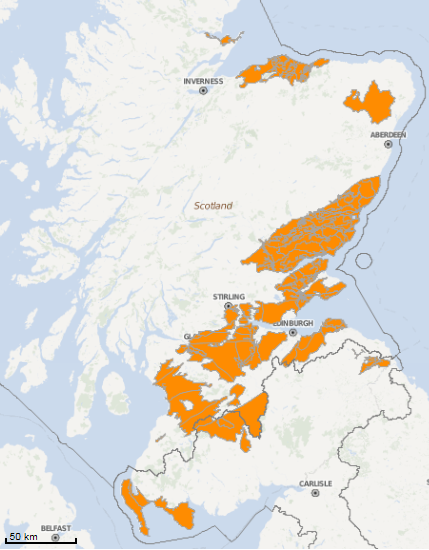 During the period 2015-16 the majority of changes were due to improvements in understanding resulting from additional data. However, there were also ‘real’ changes where SEPA are confident that the underlying quality of the environment was altered (SEPA, 2016). These improvements were delivered by removing barriers to fish migrations, and requiring licensed operators to reduce adverse impacts due to discharges of pollutants and water abstraction (SEPA, 2016)

The state of Scotland’s water bodies as a whole has significantly improved over the last few decades (Critchlow-Watton, 2014). In particular there has been significant progress in preventing and reducing pollution e.g. between 2000 and 2006 (pre-WFD), the length of rivers in Scotland that were affected by pollution was reduced by 37% (Scottish Government, 2009).

Over the course of the first River Basin Management Plans, water body types have shown no significant trend in the number of sites failing to meet good status (Table 1). However, changes in the assessment methodology make it difficult to assess the significance of any trend (see ‘Interpretation of indicator trends’ below). Despite these difficulties, there have been real improvements made to the quality of many water bodies, with around 100 already restored to good status by the end of 2013, including around 1,000 km of Scotland’s river network (SEPA, 2014). These improvements were largely secured by requiring licensed operators to reduce impacts arising from discharges of pollutants or water abstractions, as well as by working with organisations such as the Rivers & Fisheries Trusts for Scotland, to remove barriers to fish migration (SEPA, 2014).

*Proportion is based on numbers of sites not area

River basin management planning in Scotland sets out how improvements to Scotland’s water environment will be phased. This phasing has been designed to take account of the time needed to develop and implement technical solutions, and make the required investments and adjustments without creating disproportionate burden (Scottish Government, 2009). The aim is to both protect the status of water bodies currently in good or better status whilst prioritising the restoration of others.

The second RBMPs set out objectives from 2015-2027 and are informed by lessons learnt in the delivery of the first cycle. To achieve these objectives, SEPA aim to work in partnership with other public bodies, industry and land managers. The importance of recognising the impact of climate change on Scotland’s water environment is acknowledged in the second RBMPs:

“Climate change will increasingly affect demands on water resources, the ability of the water environment to accommodate water uses, the pattern of land uses and the ability of non-native species to spread and become established” (SEPA 2015)

Many of the water bodies which are currently at high status are in upland areas and they therefore support species which are adapted to colder temperatures which may make these communities less resilient to projected increases in temperature.

Fundamental to the RBMP process is the legislative framework intended to ensure action on the most significant pressures on the water environment, supported by economic incentives and funding and education to promote, encourage and support action.  It is also intended that RBMP objectives will align and integrate into both land use planning and flood risk management (SEPA, 2015).

Between 2008 -16, there was not a consistent picture across water bodies in all eleven Area Advisory Groups (Table A1, Appendix 2).

Three areas show a large (over 4 percentage points) increase in the proportion of rivers in good status- Argyll, Solway and North Highland. The greatest improvements over this period were in the Tweed, North East Scotland and Forth areas. Despite this improvement, over three quarters of rivers in the Forth area remain at less than good condition..

Three areas show an increase in the proportion of lochs assessed to be in less than good condition- North Highland, Tay and North East Scotland. The rest of the areas all show an overall improvement during this period, though the Solway, Clyde and Forth regions still have the highest proportions of lochs at less than good status.

There has been no overall change in any areas during this period.

All but two areas (Forth and Clyde) have had all their coastal waterbodies assessed as at good condition or better in 2016. The greatest improvement over this whole period occurred in the Clyde region which now has only one coastal stretch assessed as less than good. Whilst the Forth region shows a less significant change over this entire period, in 2013 all of this areas coastal water bodies were assessed as less than good, but this has now reduced to just one (or 8.3%).

SEPA has been progressively improving the understanding of the state of the water environment in Scotland, and since 2009 a number of changes have occurred to the way data is collected and analysed:

There are therefore some changes within the data over this period that reflect a change in understanding rather than an actual change in the water bodies.

One of the most significant improvements in understanding has been due to a review of the way bodies of groundwater are delineated, resulting  in over 3,400 km2 of groundwater being  upgraded and around 2,250 km2 downgraded between 2008 and 2013 (SEPA, 2014).

Analysis is based on the water bodies ID as defined in 2012.

David Denoon (SEPA) - supply of water body data and advice regarding interpretation for the original indicator in 2016. 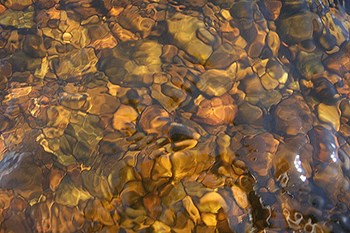