SCCAP objectives:
N2: Support and healthy and diverse natural environment with the capacity to adapt

Download the full indicator card
At a glance
Why is this indicator important?

The 34 species of butterfly that are regularly found in Scotland include both ‘generalists’ that can thrive across a range of habitats and environmental conditions, and ‘specialists’, which are adapted to certain kinds of conditions and therefore restricted to specific types of semi-natural habitat.

It is likely that the more adaptable generalist species will cope better with a changing climate than specialists that have very specific habitat requirements.

Butterflies have rapid lifecycles and some species are highly sensitive to small changes in environmental conditions, making them good indicator species. They are easily recognisable and appreciated by the public; extensive volunteer recording and monitoring networks mean they are relatively well recorded (Fox et al, 2007). As such, they are useful indicators to represent other species and biodiversity (UKBMS, 2015).

This indicator provides a comparison of trends in abundance of specialised and generalist species of butterfly allowing these to be monitored over time. It describes trends for 24 of the 34 butterfly species that regularly occur in Scotland, at 475 sample locations.

The long-term smoothed trends for all species, generalist species and specialist species, over the period for which butterfly populations in Scotland have been recorded (1979 to 2017) are all stable. 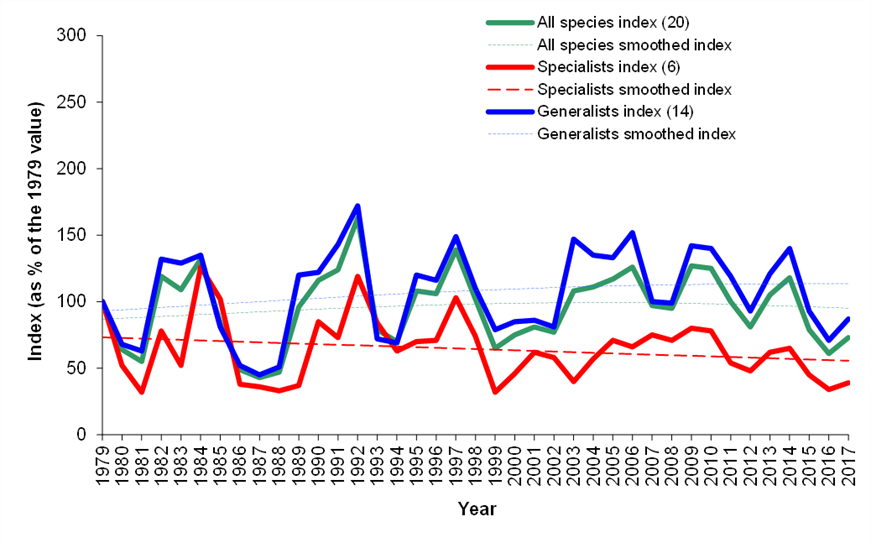 Climate change effects on butterfly populations in the UK include the northwards expansion of species previously at their northern range limit. Also, some species previously found on south-facing slopes have started colonising north facing slopes. Some migrant species have started overwintering in the UK. However for those species at the southern limit of their range, or at the low end of their elevation range, there is a likelihood of loss of climate space in Scotland as they move northwards/to higher elevations (UKBMS, 2015).

Northerly distributed specialist species are expected to be negatively impacted by climate change, with predicted long term range contractions at the southern edges and lower elevations (Settele et al, 2008, cited in SNH, 2018). While there has been no overall change in Scotland’s specialist butterflies since 1979, the grayling was shown a significant long-term decline, while the small pearl-bordered fritillary has increased significantly (SNH, 2018).

It is typical to see marked fluctuations in butterfly populations from year to year, largely caused by natural environmental factors, especially weather conditions. Short term comparisons are therefore not appropriate. Trends in butterfly species abundance are based on analysis of the underlying smoothed trend over a number of years (Asher et al, 2001).

The indicator describes trends in abundance for 20 of the 34 regularly occurring butterfly species in Scotland; insufficient data is available for the remaining 14 species.

In the early years of the survey smaller numbers were surveyed therefore the data is less reliable than in recent years (UKBMS, 2015). 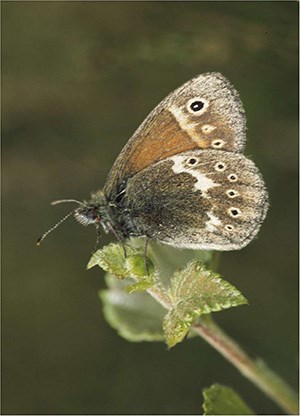