Stable (slightly increasing, though this is not statistically significant)

Natural capital describes the resources provided by nature – air, water, soils, plants and animals – that provide benefits to people. These resources underpin our economy and our quality of life. They are keystones of Scotland’s national competitive advantage in sectors including tourism, food and drink (The Scottish Government, 2018a).

The Economics of Ecosystems and Biodiversity (TEEB) report (2010) showed the importance of natural systems to economic development and the value of nature to people (Scottish Government, 2013).

There is considerable international concern that the value provided by nature and ecosystem services that underpin standards of living is not being adequately captured by markets.  This can lead to undervaluation, degradation and loss.

The Natural Capital Asset Index (NCAI) has been developed by Scottish Natural Heritage (SNH) since 2009, and aims to guide sustainable economic growth through management that protects and builds natural capital for continued use into the future. It describes changes across Scotland’s ecosystems since 2000 (SNH, 2018a).

The NCAI can be used to assess changes in natural capital over time, the success of strategy in the past and to inform future strategy. The NCAI should reflect the ability of Scotland’s ecosystems to cope with a range of pressures, including climate change.  A decline in natural capital would be expected if ecosystems were unable to cope with pressures such as a changing climate. 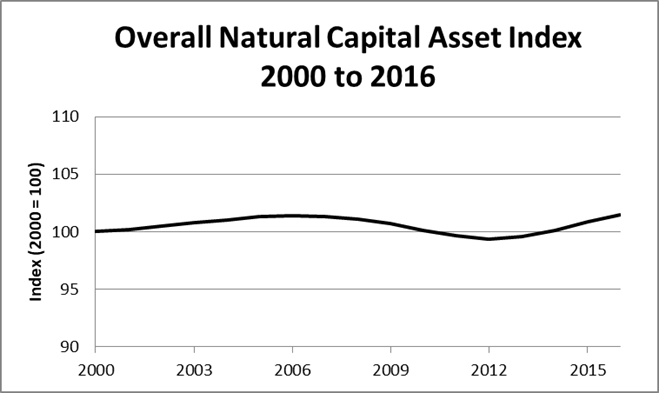 The NCAI is a composite index. It tracks changes in the potential of Scotland’s terrestrial ecosystems to provide services that benefit people. The ability of ecosystems to provide beneficial services, such as clean water and flood management, varies over time because of changes in the quantity and quality of habitats. Such changes are tracked by analysis of land cover change, together with a set of 38 indicators of habitat quality (SNH, 2018b). The ecosystem services provided by natural capital are divided into 3 main categories: provisioning services; regulating services and cultural contributions (SNH, 2018b).

Note: As the NCAI was substantially revised and developed in 2015, the data does not match that presented in the earlier version of this indicator (2016). See the Methodology for further details.

The UK National Ecosystem Assessment (UKNEA) (2011) (cited in The Scottish Government, 2013) highlighted how Scotland’s natural environment has changed since 1950. While food production from agriculture has significantly increased, there have been declines in air, water and soil quality and other ecosystem services, especially those with lower market value or lower visibility. SNH note that there were decades of decline until the 1990s; however Scotland’s stock of natural capital has since stabilised (SNH, 2018d).

‘Scotland’s Biodiversity Strategy, The 2020 Challenge for Scotland’s Biodiversity’ (The Scottish Government, 2013) aims to ensure all habitats in Scotland begin to recover from past degradation.  Peatlands are an especially important focus of attention as they play a critical role in storing carbon and have international conservation significance. 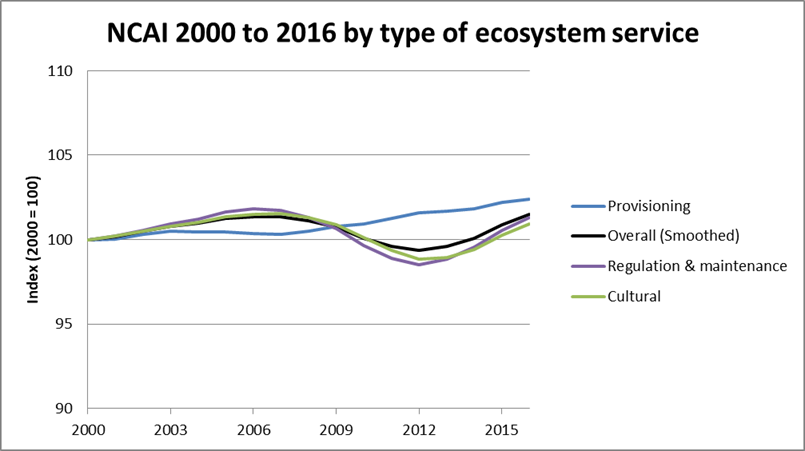 Examples of provisioning ecosystem services include: grass for livestock; dairy products; timber; soft fruits; wild salmon and venison; freshwater for drinking. Scotland’s potential to deliver these services has generally increased since 2000, particularly for freshwater (SNH, 2018b).

Some examples of regulation and maintenance ecosystem services are: climate regulation; natural flood protection; pollination; soil formation. The trend shows Scotland’s ability to produce these services has fluctuated, dipping from 2007 to 2012 then recovering to similar levels as in 2000 but below the 2006 peak (ibid).

Examples of cultural ecosystem services include: watching wildlife; recreational fishing; symbolic species and landscapes; information for education. This trend fluctuates in a similar manner to that for regulation and maintenance services; habitats in good condition are likely to have the ability to deliver both types of services (ibid). The increase in recent years reflects an increase in the number of outdoor visits, leading to more interactions with the environment (SNH, 2018d).

Regulation and maintenance ecosystem services are considered to provide the largest benefit to people in Scotland. The trend for this type of service is most closely correlated with the overall NCAI trend (ibid). 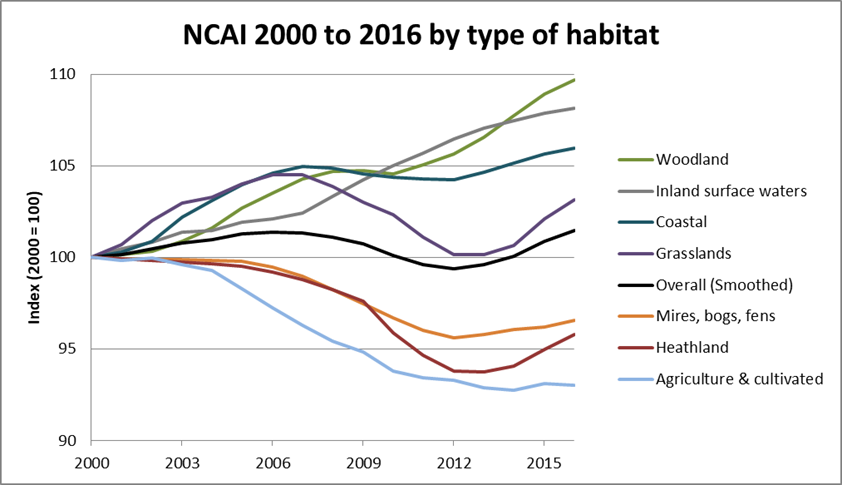 Many habitat types show good progress overall. However there are declines in some individual components, e.g. upland bird populations, quality of designated woodlands.

Woodland: Extent of broadleaved woodland habitat has increased by 20% since 2000; there are increased numbers of woodland birds. However, the condition of some designated natural features has declined.

Inland surface waters: Ecological condition of rivers and lochs has improved; river pollution is less widespread; condition of designated natural features has declined but this has stabilised since 2009.

Coastal: these has been an improvement in designated natural features, and in bathing water quality.

Grasslands: there has been a reduction in numbers of cattle and sheep. Designated natural features have recovered following a decline up to 2011.

Mires, fens and bogs: Designated features have declined, but slight improvements have occurred in recent years. There are knowledge gaps around changes in upland habitats.

Heathland: Following a decline since 2000, Scotland’s important heathland and peatland habitats have begun to recover after lows in 2012. The condition of designated heathland and peatland sites has also begun to recover. Peatlands are particularly important because of their potential to benefit people, including climate change mitigation through carbon storage. Upland birds have declined.

Agriculture and cultivated: Downward trends have been driven by loss of habitat extent. However cereal yields are now equal to their highest recorded levels and there has been some increase in farmland birds such as goldfinches and great tits (SNH, 2018b).

The NCAI is not designed to provide an absolute measure of the ‘amount’ of Scotland’s natural capital, but a picture of relative change over time and the drivers of that change (Albon et al, 2014). Also, there is no specific target. The base year is 2000 (with an Index of 100) but this is not intended to reflect the state of the environment at that point in time.  It is the long term trend in the NCAI, and the drivers behind it, that are important.

Trends in the NCAI are evaluated within the National Performance Framework (The Scottish Government, 2018a). A change of 2 percentage points or more over 3 years is considered to be significant.

The NCAI is limited to the contribution of terrestrial habitats; it does not include Scotland’s marine habitats. It does not measure the resilience of habitats to outside pressures, or changes in biodiversity. Knowledge gaps remain, e.g. we have limited knowledge of uplands outside of protected areas (SNH, 2018d).

There are not many indicators for provisioning ecosystem services, as the available indicators (current flows of outputs) do not always reflect the underlying condition of the asset providing the service that underpins potential to maintain these flows in the future  (SNH, 2018b).

While the NCAI can demonstrate the impacts of human activity on the natural environment (although it cannot distinguish between anthropogenic and non-anthropogenic driven change), it cannot always show the impact of individual policies on natural capital.  Also, it is not sensitive to how changing levels of natural capital might result in ecological thresholds or ‘tipping points’ being crossed. Close to such thresholds a small difference in natural capital as measured in the NCAI could have a disproportionately large impact on ecosystem services. A small loss in natural capital that results in a threshold being crossed could result in ecosystem collapse and loss of services; equally a small gain might result in a dramatic improvement (Albon et al, 2014).

In composite indicators such as the NCAI, significant detail can be obscured in the overall headline figure. The NCAI can be broken down into different habitats to provide a more detailed picture. The overall index should therefore be interpreted with this in mind.

The Scottish Government (2013) 2020 Challenge for Scotland’s Biodiversity.  A strategy for the conservation and enhancement of biodiversity in Scotland.  www.scotland.gov.uk/Resource/0042/00425276.pdf (accessed March 2015).

SNH developed the NCAI and carried out all the analysis described herein.

This indicator was updated in May 2018 by Ruth Monfries (RBGE/CXC). Tom McKenna (SNH) provided review and guidance.

Data sources for each area of habitat are detailed in ‘Scotland’s Natural Capital Asset Index 2018 (data to 2016) (SNH, 2018c). This can be accessed here: https://www.nature.scot/scotlands-natural-capital-asset-index-0 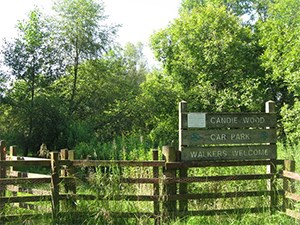