There has been a decline of approximately 5.5% in the proportion of notified habitat features in unfavourable condition since 2011.

1: ‘Habitat features’ does not include earth science features

According to Scottish Natural Heritage (SNH), ‘climate change is the single greatest threat to Scotland's habitats’ (SNH 2015b). Whilst some habitats will be affected directly, due to sea-level rise or coastal erosion for example, for most, climate change will alter the complex ecological balances that allow the plants and animals to grow and thrive. For example:

The ability of habitats to respond quickly enough will be limited- large habitats with few or minor existing pressures, and strong supporting natural processes are likely to do better than small, fragmented and isolated areas with additional pressures which will be more vulnerable to irreversible damage from rapid climate change (SNH 2015b).

Site Condition Monitoring is SNH’s programme for monitoring the condition of nature conservation features of special interest on designated sites in Scotland. The monitoring determines whether the natural feature is likely to maintain itself in the medium to longer term under the current management regime and wider environmental or other influences. The condition of an individual natural feature is assigned to one of eight condition categories (SNH, 2015a):

Habitats which are classified as unfavourable with no clear indication that they are in recovery (‘Unfavourable No Change’ and ‘Unfavourable Declining’) are potentially more susceptible to the additional pressures that will be exerted by climate change as their general resilience will already be reduced.

SNH publish official statistics based on the proportion of Scottish protected sites in favourable condition (SNH 2011-18), this indicator is based on deriving data on unfavourable condition from these statistics for each major habitat group and for habitat features as a whole. The indicator narrative is supplemented with more detailed analysis derived from the Site Condition Monitoring data provided by SNH. This indicator covers terrestrial, freshwater and marine habitats.

NB19 Proportion of notified habitats and species in ‘positive’ condition

3: Features’ are divided into Habitats, Species and Earth Science Features 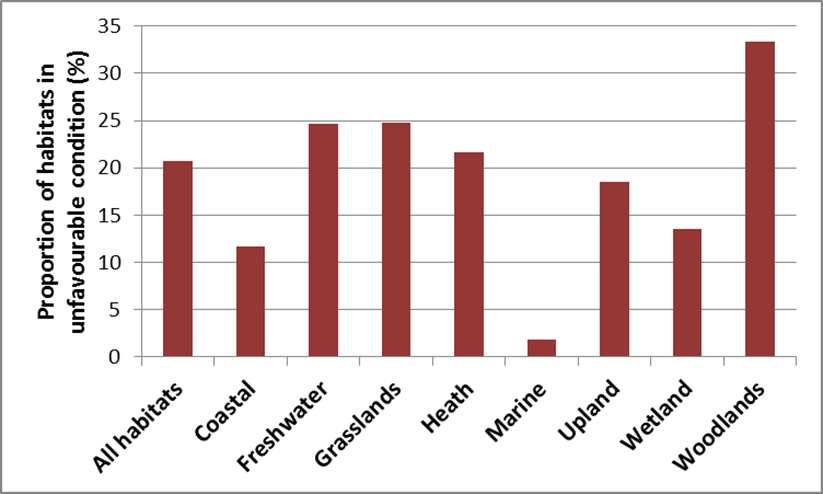 Site Condition Monitoring identifies over-grazing as being a dominant pressure in woodlands assessed as in unfavourable condition. Grazing is a major factor preventing or restricting regeneration in woodlands (Andrews et al, 2000), as well as resulting in a loss of species in the ground flora and a simplified woodland structure without shrubs or climbing species. A certain amount of grazing and browsing by herbivores such as deer is important in sustainably managing woodland and maintaining biodiversity. However, excessive activity is described as ‘currently the most widespread threat to the condition of designated woodland features’ (Scottish Natural Heritage, 2010, cited in Forestry Commission Scotland, 2014a).

Native and non-native invasive species are also a dominant pressure in Scotland’s woodlands. Plants such as Rhododendron ponticum can form dense thickets, shading out ground flora and preventing tree regeneration (SNH, 2007). Other non-native invasive species (including Japanese knotweed and non-native conifer species) can be serious problems in some areas, but tend to be much more localised. Although bracken is a native species that (in restricted numbers) can provide benefits to woodlands, if it becomes too dense it casts a deep shade and builds up the litter layer, preventing anything growing underneath it.

Site condition monitoring identifies the two most dominant pressures on all lowland grassland habitats (acid, neutral, calcareous and fen meadows) as being under-grazing and invasive species.

Both over and under grazing of grassland sites can contribute to a deterioration of condition. The species richness and scientific interest of many grassland sites is due to the historical management of the sward on the site. If these activities cease then the grasslands need to be actively managed to maintain the notifiable features which are often the basis of the site designation. In the short-term, inappropriate grazing management can, for example, adversely alter the sward height and litter accumulation. Whilst these impacts can be reversed with appropriate management, if left unchecked they are likely to develop into more fundamental changes in site condition due to resulting changes in sward composition. Under-grazing can lead to loss of diversity as more aggressive perennial and taller species close the sward and reduce gaps for the germination of short-lived species (Crofts & Jefferson, 1999).

Under-grazing can also be the underlying cause of the second dominant pressure of invasive species. In the case of Scotland’s lowland grasslands, native invasive species cause the most frequent problems. If left un-checked, succession at a site can lead to the establishment of scrub species such as hawthorn, dog roses and bracken (SNH, 2010b). Proximity to improved grassland can also result in the establishment of agricultural grasses into the sward.

Burning, trampling and over-grazing are particularly dominant pressures on upland habitats. A large proportion of moorland habitat is managed using controlled burning (‘muirburn’) to regenerate the heather. Whilst this benefits livestock and some wildlife by providing nutritious young shoots while retaining areas of older, taller heather for grouse and other birds to nest in, some bird groups are negatively impacted (e.g. passerines). When muirburn is poorly managed, it can result in wildfires which cause more extensive damage to habitats.

The impact of over-grazing can be very site-specific. Over grazing can result in depletion of vegetation diversity, prevent tree regeneration and promote soil erosion. Moderate levels of trampling by deer and livestock can benefit biodiversity on heather moorland and grasslands but can lead to erosion of more sensitive peat and upland soils (Scottish Government, 2015)

Wetlands are very sensitive to the volume and quality of water that flows in and out of them. Many of the pressures on wetlands are due to historic activities or land management priorities resulting from financial incentives to drain land for food production or development. Often the pressure on water quantity and quality is as a result of agricultural activities in adjacent or upstream areas.

Grazing can be beneficial in the creation of areas which favour seed germination, therefore a reduction in grazing in some areas can reduce the diversity of a site and result in the dominance of a few plant species.

Wetlands can also be severely affected by invasive species, both in terms of the number of invasive species that affect wetlands as a proportion of the total and the fact that invasive wetland species can be among the most aggressive and damaging (WWT, 2015).

There has been a significant fall in the number of notified habitats identified as being in unfavourable condition since 2011-12 (Figure 2). However, this picture is not uniform across all habitat groups (Table 1). 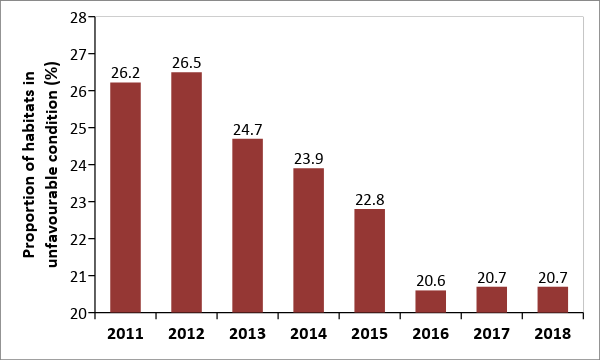 Of the habitats identified as being particularly vulnerable to climate change- freshwater, upland and wetland (Brooker et al, 2014), only freshwater has shown an increase in unfavourable condition over this period.

Projected climate change, in particular changing temperatures and water availability, threatens the viability of notified habitat sites across Scotland, with some habitats more at risk than others (SNH 2015b). The number of habitats where climate change is identified as a pressure is increasing but remains small at present. It is currently difficult to determine whether any recorded increase is due to an increased impact from climate change or to an increased awareness of its effects during more recent assessments (SNH, 2018)

Freshwater and wetland sites are often quite small, fragmented and geographically isolated in nature as well as being linked to potentially high direct impacts from projected climate change parameters such as an increase in temperatures and the number of dry days.

A rise in temperature may enable lowland species to colonise upland areas, potentially outcompeting specialist upland species resulting in homogenisation of plant communities in upland areas. In addition, the range shifts associated with climatic change typically result in a reduction of territory for upland species as they are pushed further uphill to track suitable climatic space.

Habitat networks are likely to be critical in enabling Scotland’s wildlife to withstand the impacts from climate change – having enough space and good connectivity will enable habitats to respond.

The potential scale of the impact of climate change on Scotland’s habitats presents a considerable challenge for conservation management. Resources for conservation are finite and therefore management needs to differentiate between changes that cannot be prevented and those that can be influenced through intervention. SNH’s Adaptation Principles identify a number of ways in which the pressure on habitats can be reduced through appropriate management (SNH 2012). However, to be most effective it may be necessary to target adaptation action towards natural systems which are likely to suffer the greatest impacts from climate change. Assessing the sensitivity of individual sites can be highly complex, however SNH and researchers from Scotland’s ClimateXChange are exploring the potential for a targeted approach (Brooker et al, 2014).

The first of Scottish Natural Heritage’s 8 Adaptation Principles is to ‘reduce other pressures on ecosystems, habitats and species’ (SNH, 2012). The majority of the change in this indicator is likely to be due to targeted management of notified sites to reduce the identified pressures influencing overall condition. During 2017/18, 25 habitat features moved out from unfavourable status as a result of management which specifically targeted negative pressures in those habitats (SNH, 2018). However, during the same period a number of habitat features were downgraded to unfavourable status as it was found that the management strategy in place was insufficient to successfully address the negative pressures on site (SNH, 2018).

Whilst SNH have recently introduced ‘Climate change’ as a pressure category for Site Condition Monitoring, currently only eight habitat features have this as an identified pressure. It is acknowledged that there is a need to provide more robust guidance regarding the application of this category and a distinction between evidence for current impact as opposed to a risk of future impact from climate change based on habitat vulnerability. Therefore, whilst this reporting category provides some useful insight into climate change pressures, it does not currently adequately reflect the pressure being placed on some notified sites. However, a large number of other pressure categories are potentially directly or indirectly influenced by climatic changes e.g. presence or changing extent of invasive species, plant pests and diseases, water availability and water quality.

Site Condition Monitoring (SCM): A sample of the 5376 features (habitats, species and earth sciences) in Scotland are monitored for SCM on a six-year rolling programme, with the condition of 5295 having been assessed to date (SNH, 2018). This means not all features are visited and monitored every year, or every monitoring cycle.  The sample for each reporting cycle is determined using a risk based random sampling model. This means that where the threat to, or vulnerability of a feature type is deemed to be low, the period between condition assessments is longer (e.g. butterfly features are monitored once every six years - i.e. once per monitoring cycle, whereas woodlands are monitored once every 3rd cycle). 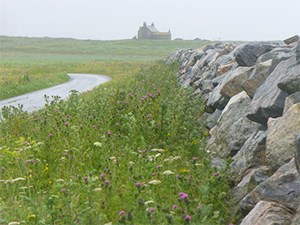