Calculations based on total farmland (utilisable agricultural area) of 5,556,000 ha.

High Nature Value (HNV) farming (and forestry) refers to farming (and forestry) systems that are important for the environmental benefits they provide, including support for a range of habitats and species (such as butterflies and birds) which are considered to be of high nature conservation importance (Scottish Government, 2014). Across Europe, half of all species depend on habitats associated with agriculture (SRUC, 2015).

The HNV farming indicator (along with that for HNV forestry) was developed by the Scottish Government to support the monitoring of the Scottish Rural Development Programme (SRDP) and Scottish Government strategies such as the Land Use Strategy. It is anticipated that in future the indicator will be complemented with a further HNV indicator that will show uptake of particular Rural Development Programme measures related to HNV Farming.

The indicator classifies farm types as HNV to provide an estimate of overall HNV farming, rather than identifying specific sites on the ground. The indicator is not intended to be used to inform site specific management decisions but rather to monitor how rural development measures are impacting upon the extent of HNV farming as a whole.

This Scottish Government indicator is being utilised here to help understand how farming systems may be working to reduce or increase the risk that agricultural intensification, which is expected to increase due to climate change, will negatively impact on biodiversity.

Supporting Scottish Government indicators that inform this indicator are:

n 2013, 44% of the total UAA was estimated to be under HNV farming, an area of 2,432,000 ha. The HNV farming holdings support low intensity farming and therefore tend to be relatively large in area. This is evident from the fact that the 2,089 HNV holdings make up only 4% of the total number of holdings in Scotland (Scottish Government, 2014).

A change to the classification of farm types in the 2013 June Agricultural Census means that figures from 2009-2012 cannot be directly compared with 2013 figures (see section below on ‘Methodology’ for further details).  As such Scottish Government (2014) state that the 2013 figures should be regarded as ‘the preferable baseline’ for the assessment of future policies (such as the 2014-2020 SRDP).

Between 2009 and 2012 the percentage of UAA estimated to be HNV farming remained stable.

HNV farming systems are traditional low intensity systems, typically with a mix of moorland, grassland and woodland. Historically, these systems have declined because of poor economic viability (SRUC, 2015).

Agricultural intensification has been the primary driver of losses in the ecosystem services delivered by UK agriculture (Firbank et al., 2011 cited in Barnes and Poole, 2012). Intensification is associated with the loss of features such as hedgerows, semi-natural grasslands and wetlands, and of biodiversity (SRUC, 2015).

Because of the importance of HNV farming for biodiversity, under EU legislation member states are obligated to monitor, support and maintain their HNV farming systems. This requirement is contained within the Rural Development Programme (RDP) and remains an EU key priority through to 2020. Monitoring is also achieved through the RDP. In light of this statutory requirement, it would be expected that the proportion of UAA under HNV farming would at least remain constant. Scotland’s Rural College (SRUC) are working with European partners to identify the many types of traditional HNV farming across Europe and develop a framework for a cohesive EU-wide approach to identifying and assessing HNV farmland. This should improve accuracy of data pertaining to the extent and condition of HNV farming (SRUC, 2015).

The proportion of HNV farming per SRDP Rural Priorities Regional Proposal Assessment Committee (RPAC) area and the contribution of each RPAC to the total HNV Farming area has been calculated for the years 2009 and 2013 (see Charts 1 & 2 and Tables 1 & 2 below and Annex One).  Despite changes to the methodology between these years, the Scottish Government considers it worthwhile considering these figures, at the very least to better understand the 2013 figures.

From Chart One it can be seen that the largest percentage increase (6%) in HNV farming occurred in the Highlands. The largest decrease (2%) was in the Northern Isles. There is significant regional variation in the percentage of farmland that is HNV.  In 2013 the Western Isles had the highest percentage of UAA land as HNV (77%) whilst Grampian and Moray has the smallest (17%).  From Chart 2 it can be seen that Highlands contributes the most (43%) to HNV farming in Scotland, followed by Argyll (11%), Tayside (10%) and the Western Isles (10%). 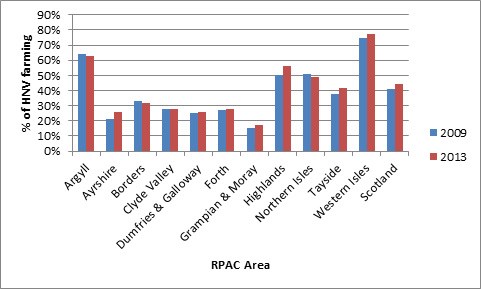 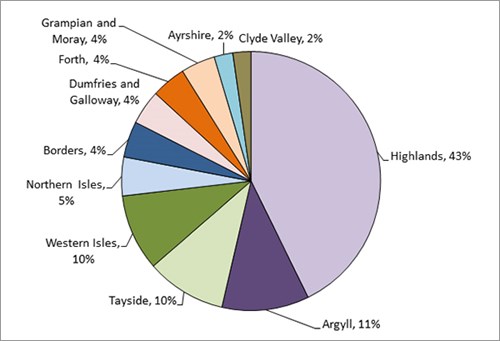 * Does not include common grazing

There was no significant change in the estimated percentage of farmland that was HNV between 2009 and 2012.  Scottish Government (2014) note that the change in the classification of agricultural holdings in the 2013 June Agricultural census may have had an influence on the increase seen between 2012 and 2013 in the area of HNV farming land and the proportion of total UAA that is HNV.  However Scottish Government (ibid) also notes that ‘the increase in the proportion of UAA that is HNV can also be attributed to the decline in the reported UAA, which has been steadily declining since 2009.  The combination of these two factors may mean that although the reported proportion of HNV has risen between 2012-2013 it may not represent a real increase in area on the ground’ (Scottish Government, 2014).

In the future, the Scottish Government will seek to understand emerging trends in HNV Farming by identifying the influence of key drivers of change such as stocking rates, number of holdings no longer keeping livestock and farmers’ attitudes.  They will use case studies to illustrate changes in farming practices that are known to be important in terms of impact on biodiversity and will also cross-check trends in HNV farming against other critical indicators such as relevant Scottish Biodiversity Strategy indicators and information on farming practices from the EU Farm Structure Survey (Scottish Government, 2011).

As has been noted, in 2013 changes were made to the farm type classifications made in the June Agricultural Census (see section below on ‘Methodology’ for further details).  This may have had an impact on the estimate of the area of HNV farming.  The Scottish Government however considers the 2013 figures to provide a useful benchmark for monitoring HNV farming into the future.

Lack of spatial data for HNV farming is an omission that has limited the level at which HNV farming can be calculated and mapped.  Scottish Government has acknowledged that data needs to improve in this respect.

Suzanne Martin (RBGE) contributed as lead author on this indicator.

HNV Farming figures are estimated from the June Agricultural Census (representative of all agricultural holdings in Scotland) and from the Single Application Form (SAF) part of the Integrated Administration and Control System (IACS). 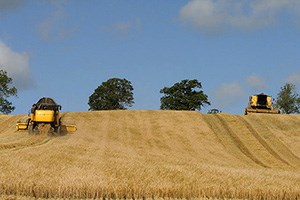