No significant change in sustainable intensification in beef farming during 2001-2010, attributed to lack of policy drivers for either increased production or improved sustainability

As well as providing food and other crops, agricultural land provides a number of ecosystem services and provides habitat for species. Additionally agriculture provides cultural value such as valued landscapes and land for recreation.

A number of drivers are expected to lead to intensification of agriculture. Globally, demand for food is forecast to rise by 50% by 2030 and by nearly 70% by 2050 (Foresight, 2011a; cited in Knox et al, 2012). Climate change is likely to lead to widespread areas increasing in Land Capability for Agriculture (LCA), so more areas will be suitable for arable farming. There is concern that this will lead to loss of habitat, a change in wildlife species present, and a negative impact on biodiversity. Areas of currently marginal farming land could become more viable. Historically, agricultural intensification has been the primary driver in depleting the range of ecosystem services delivered by agriculture (Firbank et al., 2011: Storkey et al., 2011, cited in Barnes and Thomson, 2014).

At a national and international policy level, there is considerable support for sustainable intensification as a means to achieving agricultural intensification while sustaining the ecosystem services upon which agricultural production depends and meeting societal needs in an equitable way (Barnes, 2012b).

‘Sustainable agricultural intensification is defined as producing more output from the same area of land while reducing the negative environmental impacts and at the same time increasing contributions to natural capital and the flow of environmental services’ (Pretty et al., 2011, cited in Barnes, 2012c).

This indicator utilises the Index for sustainable intensification for the Scottish Less Favoured Area (LFA) Beef Sector developed by Dr Andrew Barnes of SRUC’s Rural Policy Centre. This sector is particularly relevant because of its dominant size and potential for growth in Scottish agriculture (Barnes and Thomson, 2014) and because the landscape and ecosystem services associated with that land use could be fundamentally changed if climate change leads to a higher LCA combined with other factors such as increased demand. LFA cattle farms in Scotland ‘are characterised by large areas of rough grazing which offer significant ecological benefits and by high remoteness factors, thus embedding social factors within their existence’ (Barnes & Poole, 2012). Beef farms are also very diverse, covering all of the country including remote areas (Holland et al., 2011, cited in Barnes and Thomson, 2014).

Agriculture takes up 73% of Scotland’s land area (Scottish Government, 2013). Much of this area is only useful for livestock grazing and is therefore dedicated to Less Favourable Area (LFA) cattle and sheep farming, shown in Figure 1. 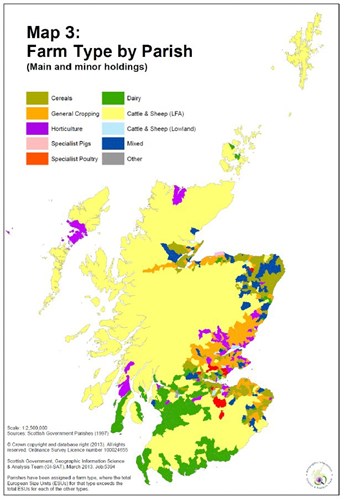 What is happening now 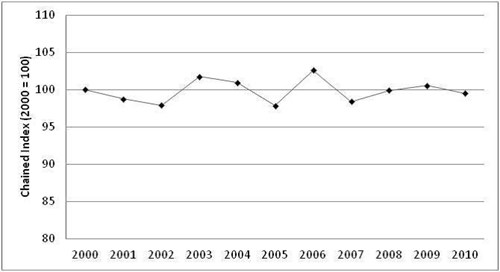 Historically, agricultural intensification has been the primary driver of losses in the ecosystem services delivered by UK agriculture (Firbank et al., 2011 cited in Barnes and Poole, 2012).

Analysis for LFA beef farms has been conducted for the period 2001-2010 only.

Agri-climatic condition changes may lead to an increase in the amount of land used for agriculture, and changes to type of agricultural use, for instance arable production becoming viable in upland areas. The resultant increased intensity of farming in upland areas could impact biodiversity, greenhouse gas emissions and other ecosystem services.

Scotland’s biogeography limits the scope for increased output in some areas, necessitating a regional approach in appraising trends. ‘Hot-spots’ of intensification exist in lowland cattle and dairy farming on the east coast and the south-west, and in cropping. However, in recent years hill and upland cattle farms have tended to more extensification (Barnes, 2012b).

The index of sustainable intensification has remained stable over the period monitored. The variations recorded are possibly due to changing subsidies/financial incentives. Specifically, the financial incentives within the EU CAP are a strong driver determining patterns of land use change.

An analysis of 42 LFA beef farms informed the index. Primary data are not available, so a set of three proxy indicators were used to assess environmental, economic and social sustainability.

All the research and analysis described in this document was carried out by Dr Andrew Barnes, SRUC. 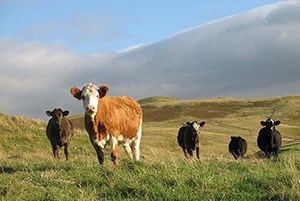