Change 2015 to 2016 (unsmoothed trend): 19% decline. This may reflect inter-annual variability, and should not in itself be regarded as a strengthening in the decline trend.

The smoothed farmland bird index increased steadily through to the late 2000s before declining, then levelling off from 2013 to 2016.

Download the full indicator card
At a glance
Why is this indicator important?

Farming is an important activity in Scotland, strongly influencing the landscape (Hall, 2011, cited in Foster et al, 2013) and supporting many wildlife species.  However during the period after the Second World War until the 1980s, farming practices in Scotland went through a process of intensification to increase levels of production.  This led to a reduction in suitable areas for wildlife such as birds, butterflies and bees. Since the 1980s there has been a range of measures put in place to try to increase wildlife habitat. However not all species of farmland birds have seen population increases.  (Foster et al, 2013).

Although only minimal impacts on farmland birds can be directly attributed to climate change (Eglington and Pearce-Higgins, 2012, cited in Foster et al, 2013), projected climate change is likely to provide an opportunity for increased agricultural productivity in Scotland and further agricultural intensification.  An increase in the area of land used for intensive agriculture could have a negative impact on biodiversity, especially on currently marginal agricultural areas (HR Wallingford, 2012). This could lead to further pressure and potentially reduce populations of farmland birds.

This indicator reports on the abundance of farmland breeding birds and is based on the Scottish Biodiversity Indicator ‘Abundance of terrestrial breeding birds’.  The majority of bird species included in this indicator respond quickly to changes in the extent and condition of habitats, through changes in breeding productivity, survival or dispersal.  Most species are widespread and relatively easy to identify and count, therefore making good indicators of environmental change (SNH, 2017). The primary data source is the Breeding Bird Survey (BBS) that has run since 1994, therefore 1994 is the base year used for the Index of Abundance (BTO, 2015).

The Index of Abundance for Scottish Farmland Birds from the base year 1994 to 2016 is shown in Figure 1. Over the whole period, the smoothed farmland bird index increased steadily through to the late 2000s before declining, then levelling off from 2013 to 2016. In the most recent year, 2015 to 2016, the unsmoothed index declined by 19%. Overall numbers of farmland birds have fallen from the peak seen in 2008, but are above the 1994 baseline level. 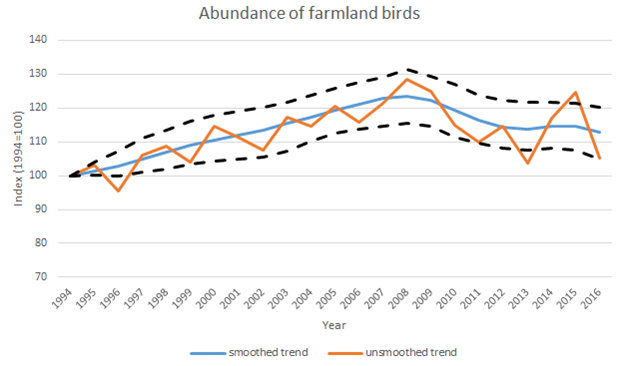 Trends for individual species indicate that 14 species (out of 27 recorded species) increased in abundance (between 1994 and 2016). This included goldfinch, their increasing numbers being attributed in part to additional sources of food, such as nyjer seed in bird feeders. One species remained stable and twelve decreased in abundance, with long term decreases recorded for lapwing, greenfinch, linnet, skylark and kestrel.

A recent Trend Note (Foster et al., 2013) provides more information on the changes to farmland birds.  It presents trend information (1994 – 2011) for: seed-eating farmland birds (linnet, skylark, tree sparrow and yellow hammer), farmland waders (curlew, lapwing, oystercatcher, redshank and snipe), and corn bunting (Priority Species in the Scottish Rural Development Programme).  It was found that seed eating birds have increased in abundance, although since 2007 the trend has been flat, and that farmland waders have undergone a steep decline between 1995 and 2010. Maps and further information on trends in specific species can be found in Foster et al (2013).

Many farmland bird populations declined in the 1970s and 1980s due to intensification of agricultural production, driven in part by EU Common Market funding. This led to the loss of important habitat features for farmland birds, such as hedges and wet areas (Chamberlain et al, 2000, cited in Foster et al, 2013).

Historical trend data for farmland birds in Scotland is lacking (Wilson, 2011, cited in Foster et al, 2013), however, declines have been seen for a range of birds since the 1970s (Benton et al, 2002, cited in Foster, 2013) and for some individual species (e.g. corn bunting).  A suite of farmland birds including lapwing, tree sparrow and yellow hammer declined in range by 8% between 1970 and 1990 (Noble et al, 2007 in Foster, 2013). Corncrake, a species that was abundant in the nineteenth century, declined sharply during the twentieth century as a result of mechanised mowing of hay, so that by the early 1990s there were less than 500 calling males, restricted to the far north and west, until conservation measures (agri-environment and reserve management) were put in place (High Nature Value Farming, 2014; RSPB, 2018).

Climate change and other drivers, such as global demand for food, are expected to drive agricultural intensification (Foresight, 2011; HR Wallingford, 2012). Since in the past such intensification has led to declines in abundance of farmland birds it is likely this would occur again, unless appropriate adaptation action is taken. Sustainable intensification of agriculture has been widely discussed in international policy circles, as a means of increasing agricultural production while protecting biodiversity, along with meeting social, economic and ethical criteria (See related indicator NA8).

There is considerable variability in the trends for individual species of farmland birds. Numbers of goldfinch, whitethroat, corncrake and great tit have more than doubled since 1994. However, other species have declined, with kestrel, greenfinch and lapwing at less than half 1994 numbers (SNH, 2017).

Following the successful introduction of conservation measures and increases in the numbers of corncrakes (RSPB, 2018), numbers have fallen in recent years leading to concern for the long term survival of breeding corncrakes in Scotland (Barrett, 2017).

Agricultural intensification is a major driver in the long-term decline of a number of species, due to changes such as draining wetlands, sowing cereals in autumn and increased fertiliser and pesticide use (Newton, 2004, cited in Foster et al, 2013). Declines in other species are associated with disease outbreaks, such as trichomonosis in greenfinches (Lawson et al, 2005, cited in Foster et al, 2013)).

In relation to trends identified in their analysis, Foster et al (2013) say that declines in farmland waders are driven by a range of factors including land-use change.  Different species of waders require different habitat conditions for successful breeding (for example ploughed fields are needed by lapwing and wet ditches by redshank). Changes to cropping regimes and improved drainage have reduced these features.  Predation has also been shown to be reducing breeding success of waders (Foster et al, 2013).

There are 46 terrestrial species that regularly breed in Scotland but are not monitored by the BBS (due to their scarcity), or in separate targeted surveys. These include farmland species that are of conservation concern (Eaton et al, 2015, cited in SNH, 2017). Farmland species including grey partridge, corn bunting and tree sparrow are not included in this indicator due to insufficient coverage by the BBS (SNH, 2017).

This indicator is based on the Index of Abundance for Scottish Terrestrial Breeding Birds, 1994 to 2016 (An Official Statistics Publication for Scotland), produced by SNH. The data is primarily from the national volunteer project, the Breeding Bird Survey.