NB These figures are for the total land area (excluding built land and water) in Scotland.

Wetness risk is a component of Land Capability (Bibby et al., 1982) that provides constraints on land use options through its limitations on trafficability (the capability of the land to support agricultural traffic without degrading soils) and workability (the capability of the land to support tillage) for arable land; and trafficability and poaching (damage caused to turf by livestock) risk for improved grassland. It can therefore mean that a particular land use option is unviable due to problems with machinery accessing the land, damage to soil structure and limitations on stocking capacity.

Wetness risk can cause problems with soil compaction unless good management practice is followed and compaction can further exacerbate wetness problems due to reduced soil water storage and internal drainage limitations. Up until 2015, the cultivation of wet soils in terms of ‘Appropriate Machinery Use’, and the maintenance of functional field drainage systems were included in the GAEC (Good Agricultural and Environmental Condition) management standards as required by the cross-compliance regime of the Common Agricultural Policy for Single Farm Payment[1]. 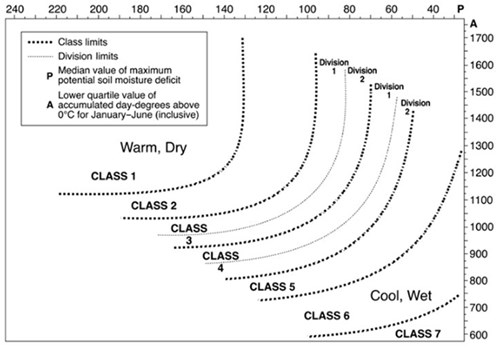 Wetness risk can be evaluated by metrics that are integral to the overall classification of Land Capability for Agriculture in Scotland. These agro-climatological metrics are empirically defined based upon the interaction between climate and local soil properties therefore they are modified by climate change. Figure 1 presents the two climate parameters and their associated classification as used in the LCA system. For the indicative figures, long-term averages are used (20 years is the norm for land capability assessments) but it should be noted that there is significant year-to-year variability. A separate wetness risk assessment is made for grassland (poaching risk) and arable land (workability).

[1] With drainage there is the considerable possibility of trading off Good Agricultural and Good Environmental Condition against each other, making it difficult to interpret what ‘functional’ relates to (agricultural or ecosystem function?). Obtaining the right balance between the two is context-specific (especially regarding soil properties) which is maybe more suitable for specialist advice than a general regulatory rule (Brown, 2015)

The general pattern of wetness risk that has had a major influence on land use in Scotland has not changed significantly, although there are important local variations (Figure 2). West Scotland has a greater wetness risk than East Scotland due to the wetter climate but this is locally modified by the water retention properties of the soil. As a consequence of the general climatic pattern, grassland is more predominant in West Scotland whereas most of the arable land in Scotland is in the east of the country. In general the west of the country also experiences more variable conditions than the east, and in some parts of East Scotland (e.g. Aberdeenshire) there is a slight trend to drier conditions (although this is dependent on how the baseline is defined). Parts of South-West Scotland (e.g. west Ayrshire) may have experienced an increase in wetness risk although this is more easily related to intrinsic climate variability than to a trend of long-term climate change. 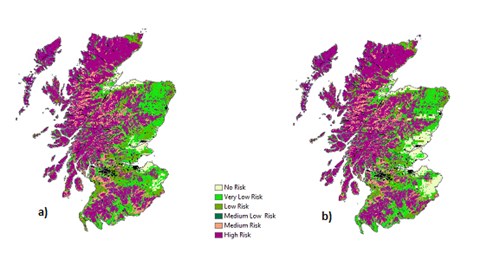 Analysis of consecutive periods back to the 1961-80 period (Figure 2a) shows that wetness risk factors for both arable and grassland are temporally variable with inter-decadal changes that mainly reflect variations in precipitation. The climate-defined access period (time when soils are not at field capacity assuming free drainage) has generally increased (typically by about 20 days) over this time but with variable geographic patterns.

Future projections are strongly influenced by the climate change scenario used.  However, most projections would imply that average wetness risk will be reduced, particularly in East Scotland, which may enhance land use options in current marginal areas. Drier parts of the uplands may therefore be more suitable for improved grassland due to a shift in average conditions to warmer summers and reduced soil moisture. However, many other parts of the uplands and particularly North-West Scotland will continue to have major wetness limitations that prevent land from being agriculturally improved.

This is a complex issue, due to the spatial interaction of climate variability with local soil properties but with greater temporal variability evident in West Scotland compared to East Scotland. Local spatial variability is determined by soil type.

As the dominant climate influence is precipitation-related then intrinsic (‘natural’) decadal climate variability acts to confound any interpretation of a long-term trend. There is some evidence that in parts of East Scotland the wetness risk has been reduced as the access period has lengthened on favourable soils.

The presence of field drains is a key adaptation response that modifies wetness risk. Unfortunately, spatial data on drainage (include age and type) has not been available for the assessment although drainage systems are known to be widespread in agricultural areas of Scotland. For this assessment, it was necessary to modify soil series dominated by ‘brown soils with gleying’ and ‘noncalcareous gleys’ to include the presence of field drains in these areas as the existing land uses would only be practicable with lower water tables .

The metrics should be considered in combination with other aspects of land capability, notably the overall LCA assessment and drought risk. Although land may be classified as suitable for arable/improved grassland other factors, notably intrinsic soil constraints or the length of the growing season, may mean it is actually unsuitable for these land uses in practice.

More detailed analysis of wetness risk and its links to drainage properties for land capability is being prepared for a paper scheduled for April 2015.

Development of this indicator and primary author of this document:  Iain Brown, James Hutton Institute.

This research has been funded by Scottish Government through their strategic research programmes: Environment: Land Use and Rural Stewardship (2006-11) and Environmental Change (2011-16). 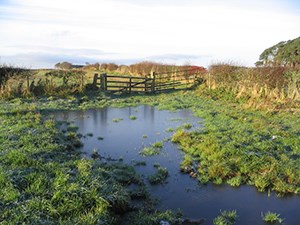