Across Great Britain 267 potato blight outbreaks were reported in 2014

Seed and ware potato production is an important industry in Scotland particularly in the east of the country from Edinburgh to Inverness. Potato late blight, caused by the pathogen Phytophthora infestans, is one of the main threats to the potato crop during the growing season (April to October).

Disease epidemics are driven by the weather conditions with periods of free moisture (high humidity, dew and rainfall) and moderate temperatures (13-16oC) being optimal for pathogen infection and spread. If unchecked the disease can result in total crop loss within 7-10 days. The disease is managed by routine applications of fungicide at intervals ranging from 3 to 7 days depending on the weather conditions.

Because of its importance, late blight activity is closely monitored and disease outbreaks are reported and sampled.  In addition, models have been developed that use environmental data to predict blight activity and spread to understand epidemics and provide a foundation of decision support tools for growers (Skelsey et al., 2009).

Late blight activity in Scotland is monitored as part of a Great Britain (GB)-wide network sponsored by AHDB-Potatoes in their Blightwatch1 and Fight Against Blight (FAB)2 schemes. In the case of Blightwatch the MetOffice provide meteorological data that predicts pathogen activity on the basis of ‘Smith Period’ data. A ‘Smith Period’ is defined as two consecutive days in which the minimum air temperature was at least 10oC and there were greater than 11 hours per day with a relative humidity of at least 90%.

In the Fight Against Blight programme a group of volunteer potato field advisors report late blight disease outbreaks and provide samples to the James Hutton Institute for further analysis. This data shows that there were 267 outbreaks reported across the whole of Great Britain during 2014. The disease started early in 2014 with the first outbreak on 9th May.

The timing of potato late blight outbreaks in the UK has been predicted and reported using weather- based criteria since the 1950s but there is no single source of continuous data. First outbreaks in western Scotland were, for example, reported to occur most frequently at the end of July in the period from 1944 to 1952 (Gray et al., 1953, in Cox and Large, 1960). The FAB system has been recording outbreak numbers and the timing of first outbreaks since 2003. At a GB level, the date of first outbreak (Fig. 1) has been shown to vary from 4th May to the 8th July with no particular trend (AHDB Potatoes data plotted by the authors). Over this period the number of reported late blight outbreaks has ranged from 68 to 300 (Fig. 2) with a strong negative relationship between date of first outbreak and the total outbreaks reported (Fig. 3). 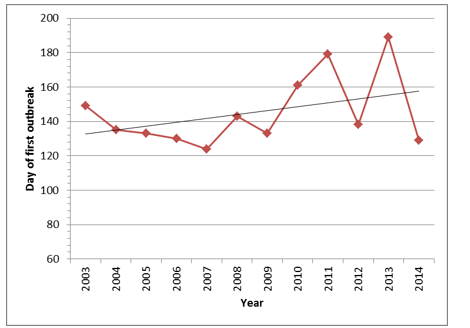 Figure 1 AHDB Potatoes data on the day of the first reported potato blight outbreak (days since start of each year) over time since 2003.

Disease incidence and severity are strongly driven by weather conditions with even short periods of optimal weather driving explosive epidemics at a single field to regional scales. This makes it challenging to predict longer-term trends (multiple decades) from short term (1-2 decades) data sets. 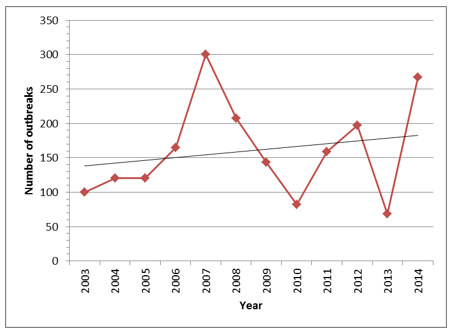 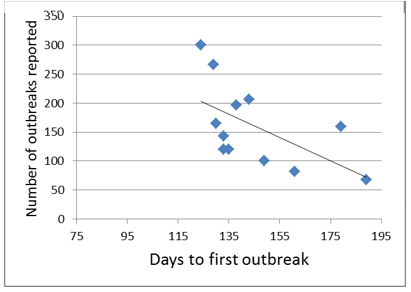 Figure 3 Relationship between day of the first reported potato blight outbreak (days since start of each year) and the number of outbreaks reported (AHDB Potatoes Fight Against Blight data).

The current predictions for Scotland’s climate indicate drier and warmer spring and summer conditions (e.g. Fig. 4). Given that moisture is a major driver of epidemics this suggests potato late blight may, on average, reduce in incidence in the future. Temperature, however, drives the rate of epidemic increase so when disease does occur it will be predicted to spread more rapidly under the warmer conditions. Wind spreads the pathogen spores and a predicted decrease in spring and summer wind speed may further reduce disease spread (Skelsey & Newton, 2013). If the climate becomes drier the use of irrigation will increase which may counteract the reduction in disease pressure. Scotland’s climate is also predicted to get warmer and wetter over the winter and autumn periods. Although the crop will not be in the ground at this stage, this may maintain higher levels of pathogen inoculum across the whole year. Under warmer winters more potato plants and wild solanaceous weeds will be growing and propagating P. infestans inoculum and fewer of such plants will be killed by severe winter frosts.

There is very little evidence in the literature on how potato late blight is projected to change with the climate but such studies are underway at The James Hutton Institute. 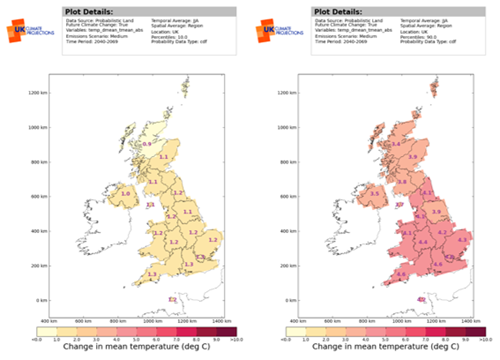 If disease pressure is altered by climate change then the industry will respond accordingly. Under current conditions the first response would be reflected in a change in fungicide input (see below). If disease pressure is reduced then the spray interval would be extended and vice versa should pressure increase. Increased fungicide use would have negative economic and environmental consequences.

Current work at the James Hutton Institute funded by AHDB Potatoes is focussed on smarter decision support systems (DSS) with new disease risk criteria. Such systems aim to improve decision making for growers and optimise the efficiency of fungicide use.

Longer term, growers could also adapt to increased risk by growing potato cultivars with higher levels of potato blight resistance. A potato variety database lists the blight resistance ratings of those grown in Britain (http://varieties.potato.org.uk/) and AHDB Potatoes and SASA maintain records of the area of each potato variety (ware or seed) grown each year. Currently, processing quality and agronomic traits (e.g. yield, date of maturity) are the main drivers of variety choice which is demand led via main buyers (supermarkets and processors).

Geographical variation is not relevant in this case as currently potato crops are only grown in the eastern administrative region of Scotland and this is not expected to change. Climate change is not projected to cause changes in agricultural planting patterns, but may affect the timing of planting which may subsequently affect disease risk.

The available data on disease outbreaks and Smith Period predictions has been gathered for 12 years and there is no clear trend in changing disease incidence, severity or timing. There is one indicator in the literature of late blight outbreaks occurring earlier due to warming spring conditions in Finland but this was related to earlier planting (Hannukkala et al., 2006).

The strongest indicator of late blight risk is likely to remain fungicide use. Fungicides comprise a relatively small component of the total costs of potato growing and given that potato blight can very rapidly destroy a crop growers tend to be risk averse and may spray the crop every 3-5 days if disease pressure is high when the crop canopy is growing most rapidly. Fungicide usage is monitored as part of the Pesticide Usage Surveys in England and Wales (www.secure.fera.defra.gov.uk) and in Scotland (www.sasa.gov.uk). The recent data for Scotland shows, for example, approximately 40,000 more hectares of potatoes treated with fungicides in 2012 than in 2010 (Watson et al., 2012) which is a clear response to increased disease pressure (Fig. 2).

It is possible that an exhaustive review of the literature for the first date of late blight outbreaks may reveal evidence of a trend in the timing of disease outbreaks in the 20th Century but relating this change to altered climatic conditions is very challenging given the uncertainty of associated factors such as changing potato cultivars and pathogen population, planting dates and other cultivation practices and, lastly, regional variation in disease pressure. Similarly there are limitations on using late blight as an indicator for future climate change due to the same constraints and the fact that even a short period of favourable weather can trigger epidemic conditions.

As mentioned above, optimal temperature and periods of high humidity are the two major drivers of potato blight disease. While changes in temperature are projected by all climate change models, periods of high humidity are not projected and this can limit the power of projections. Another factor that should be considered is the variability of the climate which could be as important as the change in average temperature or rainfall (e.g. Shakya et al., 2014).

Currently data are collected on a GB rather than Scotland scale. This is due to the GB scale remit of the AHDB Potatoes research programme. If required data specific to Scottish criteria could be extracted from the raw data in the future.

Hannukkala AO, Kaukoranta T, Lehtinen A, Rahkonen A, (2007) Late-blight epidemics on potato in Finland, 1933–2002; increased and earlier occurrence of epidemics associated with climate change and lack of rotation. Plant Pathology, 56, 167–176. 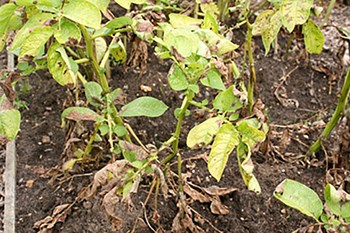