NA22: Area of cultivation under glass or plastic structures

The trend is assessed as neutral as the structures mitigate the effects of extreme or variable weather and extend the growing season but may prove costly long-term with regard to pest and disease control.

The area of crops grown under glass or plastic structures has increased rapidly in recent years (see Figure 1). With strawberries and raspberries accounting for 90% of cultivation under cover, this growth has been driven by demand from supermarkets for large amounts of high quality soft fruit (Evans, 2013). Growing under cover enables continuous production throughout an extended season, as demanded by supermarkets, rather than the traditional short season that was subject to vagaries of the weather. Use of glass or plastic structures such as polytunnels can mitigate the effects of extreme or unpredictable weather, in addition to improving productivity by extending the growing season. The warming climate has extended the growing season over the last fifty years (Scotland’s Environment, 2014), however weather variability and extremes mean this does not necessarily translate into a reliable longer season for soft fruit. The primary driver for the growing use of polytunnels appears to be consumer and supermarket demand, however both the natural variability of the weather and climate change driven extreme events, such as the prolonged heavy rainfall experienced in 2012, are factors.

Climate projections indicate warmer, drier summers on average, but also more frequent intense rainfall events in future. This might suggest that the use of polytunnels is a suitable adaptive action; however, there is evidence of an increased risk of pests and diseases, particularly aphids, within polytunnels.

Pest-resistant crop cultivars (plants bred for resistance to pests and diseases) tend to rely on a small number of resistance genes. However, many pests such as aphids can evolve very rapidly and overcome single genetic or pesticide controls more quickly than new methods of control can be developed for some crops (Dogimont et al, 2010; cited in Birch et al, 2011). This process whereby pests co-evolve to overcome control measures speeds up significantly in glass or plastic structures because the temperature, humidity, levels of CO2 and shelter are all favourable for aphids and similar pests (Birch et al, 2011).

For example, the window of attack by Amphorophora idaei, the primary virus vector aphid, is 2-3 months in open fields. For raspberries grown in polytunnels this window increases to 10-11 months. The micro-climate in polytunnels has also enabled other, formerly minor pests of raspberries, to thrive and persist throughout an extended cropping season. There are a significantly higher number of aphid species attacking tunnel-grown raspberry crops, compared to crops grown in open fields (Birch and Begg, 2010; cited in Birch et al, 2011). Birch et al (2011) point out that ‘This indicates that changing climate and crop management are interacting to make some pest problems dramatically more serious than 10 years ago’.

However, polytunnels and greenhouses do provide good conditions for some key predators of aphids such as spiders and hoverflies. Compared to open fields, an increase of 2-6 times of different natural enemy groups has been found on raspberry (Birch et al, 2011). This suggests an opportunity for biocontrol to be used for high-value crops such as soft fruits in polytunnels as part of an Integrated Pest Management (IPM) solution (Birch, 2008; Birch and Begg, 2010; cited in Birch et al, 2011).

‘Integrated Pest Management (IPM) is an ecosystem approach to crop production and protection that combines different management strategies and practices to grow healthy crops and minimize the use of pesticides’ (FAO, 2015).

With wider relevance in the context of climate change, Birch et al (2011) also note that ‘These studies also demonstrate how small changes in climatic conditions which are accumulated over an extended growing season can have a large effect on the complex interactions in agricultural food webs and lead to new pest and disease problems’.

As Figure 1 shows, in recent years there has been huge growth in the use of polytunnels, representing a significant change in crop management systems over a very short period of time. Indeed, growing crops under cover is one of the fastest growing land uses changes to occur in recent years (Squire, 2015).

The area of cultivation under glass or plastic structures has been increasing. It has risen from 80 hectares in 2003 to 1038 hectares in 2013, as shown in Figure 1.

It should be noted that from 2009, the data collection method changed (see Table 2: Indicator data - Uncertainties). It is not known whether this contributed to the apparent increase from 2008 to 2009. 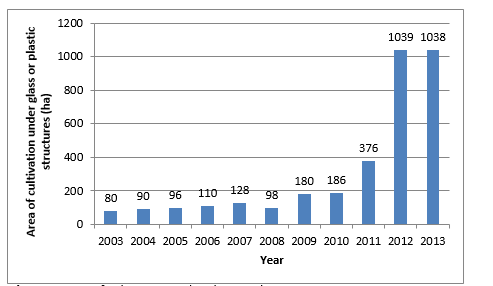 For a more detailed breakdown of area of cultivation under glass and plastic see www.scotland.gov.uk/Topics/Statistics/Browse/Agriculture-fisheries/PubfinalResultsJuneCensus

The growth in the area of cultivation under glass or plastic structures, especially use of polytunnels, while largely consumer demand driven, can also be interpreted as an adaptive measure to climate change. The structures can protect crops from extreme weather events. However, experience suggests they could potentially be an example of maladaptation, as they create conditions that can exacerbate pest and disease problems. Due to their nature, providing an enclosed space, it is also the case that such issues can be managed more easily. There are also many unknowns regarding their impact on the surrounding environment (the section ‘Interpretation of indicator trends’ below provides more detail). Additionally, should the area cultivated under glass and plastic continue to increase rapidly, the visual effect on Scotland’s rural landscapes may be significant. Therefore, it is important that the extent of structures, together with the efficacy of pest and disease management and impacts on surrounding land, are monitored to ensure they contribute to successful adaptation and not maladaptation.

In 2014, the majority of cultivation under plastic and glass structures was for strawberries (818 hectares) followed by raspberries (188 hectares). Blueberries (42 hectares), other fruit (27 hectares), bedding and pot plants (16 hectares), hardy nursery stock (14 hectares), vegetables (11 hectares) and tomatoes (3 hectares) account for the remaining area of cultivation1.  See Figure 2. 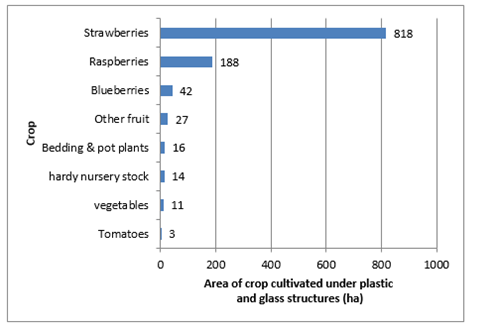 Use of polytunnels is concentrated in Tayside (Evans, 2013).

There has also been an increase in plastic or fibre covers that are laid on the soil above germinating crops such as potatoes and vegetables (Squire, 2015). Data regarding the area under such cover is not currently available.

In addition to the pest and disease issue discussed above, there is little known about the likely impact of glass and plastic structures on the surrounding land and the land below them. Given the rapid increase in use of such structures, such effects may influence local resilience and adaptive capacity.

So while the area covered is small overall, the local effects could be substantial’ (Squire, 2015). 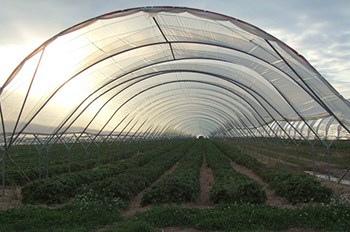