Area of arable agricultural land at risk of flooding for 1 in 10, 50 and 200 year flood events

The current frequency and severity of agricultural flooding results in lower crop yields, localised soil structure damage and loss of livestock with relatively limited losses to the sector (Werritty & Chatterton, no date).  Such losses may be disproportionately damaging to rural livelihoods and to Scotland’s important food and drink sector. In future, losses to agricultural production are likely to have more significant consequences in the context of food security for a growing global population and the impacts of climate change; the corresponding economic losses are also likely to increase.

Climate change is projected to lead to increased precipitation with more intense rainfall events in summer and wetter winters. Sea level rise together with increased storminess is expected to increase the risk of storm surges and coastal flooding. Therefore there is a risk of more frequent damaging floods. The increased threat to agricultural land from both projected flooding and coastal erosion is identified in the Climate Change Risk Assessment for Scotland. Land that is flooded frequently, particularly by sea water, may become unsuitable for agricultural use. The resultant downgrading or loss of agricultural land may adversely impact rural economies (H.R. Wallingford, 2012). Flooding of arable land also increases diffuse pollution, with runoff including nitrogen and phosphorus loads from fertiliser adversely impacting water bodies (see Indicator NA14: Freshwater bodies affected by diffuse pollution due to agriculture).

‘Agricultural practices have a role in regulating run-off particularly through increased storm water storage, restoration and management of wetlands and upland areas. This can reduce downstream flooding risk. Because a significant area of prime agricultural (land) in Scotland is itself at risk, reducing accelerated run-off through changed cultivation techniques and riparian zone management, may have agricultural and environmental benefits as well as reducing flood risk. In a similar way to control of agricultural pollution, this points to the benefits of a catchment-based approach’ (Scottish Environment Link, 2005).

This indicator provides a baseline assessment of the area of arable agricultural land at risk of flooding from both fluvial (river) and coastal (seawater) flooding.

The Scottish Environment Protection Agency (SEPA) has produced a Baseline Assessment of flood risk, including an estimate of the area of arable agricultural land at risk of fluvial and coastal flooding. While different types of agricultural land use, such as livestock grazing are also negatively impacted by flooding, the most significant economic losses arise from flooding of arable land.

Table 1 Area of arable agricultural land at risk of flooding for 1 in 10, 50 and 200 year flood events (Source: SEPA)

SEPA estimate the cost of damage to arable agricultural land as a result of fluvial and coastal flooding at approximately £42 million for a 1 in 10 year flood event, rising to around £55 million for a 1 in 200 year event (Note this may include some double-counting: of arable land that is at risk of flooding from both fluvial and coastal sources). This assessment considers the cost of one-off loss of crops/harvest only and therefore does not account for all flooding related costs, such as damage to the land’s future productivity and repair of flood defences.

Agricultural holdings cover 71% of Scotland’s land area, some 5.6 million hectares[1]. Rough grazing makes up just over half of this area, grass one quarter, about 10% is used for crops or left fallow. The remaining area is woodlands, ponds, yards or other uses (Scottish Government, 2015). In 2005, it was estimated that 6.7% of Scotland’s prime[2] agricultural land was within flood risk areas (Scottish Environment Link, 2005). Prime agricultural land is the best quality land that provides most flexibility in land use, being suitable for arable farming.

Some 33% of all agricultural land is situated within the 5km coastal area (Land Cover for Scotland (LCS) 1988, cited in JHI, no date).The proportion of arable land within this is not available within the current data.

Because agricultural land accounts for over 70% of Scotland’s area, the way in which it is managed can also have a profound effect on the wider impacts of flooding across the country, including on urban areas and other land uses. Historically, agricultural land has been protected from flooding by measures such as river and coastal embankments and construction of drainage ditches. However, this moves floodwater quickly downstream where it can impact urban and residential areas or infrastructure. Allowing agricultural land to flood so that more water is held on floodplains can be beneficial as part of a broader flood risk management strategy. Natural flood management is a sustainable approach to flood management, the framework for which is established in the Flood Risk Management (Scotland) Act 2009. However this approach to flood risk management at a river catchment scale can of course conflict with protecting agricultural land from flooding, particularly the prime land that covers 8% of Scotland’s area. In 2014, NFU Scotland called for prime agricultural land to be given a higher weighting in the FRM process (recognising its role in food production and rural economic output) and for a relaxing of restrictions placed on farmers regarding flood defences together with a presumption against siting Natural Flood Management measures on prime agricultural land (NFUS, 2014).

[1] Scottish Government Statistics. Note that the data utilised in the indicator is produced by SEPA using LCA2007 data. A figure for the total agricultural area in Scotland using an equivalent method is not currently available, so the proportion of agricultural land at risk of flooding cannot be derived. It is hoped this may be available in future.

[2] LCA classification (Bibby et al., 2008) provides an objective and published method of determining the agricultural quality of the land resource of Scotland. It is based on the degree of limitation that climate, soil and topography impose on agricultural production and cropping flexibility. It is a seven class system with Classes 1, 2 and 3.1 being described as prime agricultural land by the Scottish Government. Prime land also receives a degree of protection from development within the Scottish planning system.

Fertile agricultural land is often situated in floodplains. Flood defences for farmland have therefore been commonplace, including the embankment and canalisation of rivers, and drainage of land. However policy emphasis has changed and is now focussed more on the delivery of public benefits and agricultural enhancement (Scottish Environment Link, 2005). This includes the removal of funding support for such measures, with emphasis now placed on natural flood management and biodiversity benefits.

Since the 1950s there has been a high level of variability in the frequency and severity of fluvial flooding. Land owners are generally responsible for the protection of property and farmland from flooding (ibid).

Climate projections for increased precipitation and more intense rainfall events, together with sea level rise indicate an increase in flood risk, suggesting an increase in agricultural losses from flooding if agricultural activity remains the same. Projected sea level rise would lead to more frequent and severe coastal flooding and the loss of low lying land. Regularly flooded land, especially by the sea, may become unfit for agricultural use (CCRA for Scotland).

However, there is likely to be an intensification of agriculture in some parts of Scotland, due to climate change leading to an increase in land suitable for agricultural improvement (Brown et al, 2008). Intensification may also be driven by an increasing global demand for food due to population increase and climate driven declines in agricultural production in other parts of the world.

Agriculture has an important role to play in regulating runoff, in providing increased storm water storage and the restoration and management of wetlands and upland areas, which can all help reduce the risk of flooding downstream. Appropriate cultivation techniques together with management of riparian areas can reduce flood risk, benefitting both agriculture (since much prime agricultural land is at risk from flooding) and the environment as part of a catchment-based approach to flood risk management (Scottish Environment Link, 2005).

The data used herein has been produced very recently by SEPA and full contextual and methodological information is not yet available.

SEPA provided the data used in this indicator. 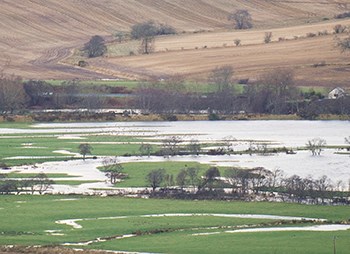