Diffuse pollution, arising primarily from agricultural sources, constitutes a significant pressure on Scotland’s rural water environment[1]. Soil erosion and run-off result in suspended sediments, nutrients (fertiliser), and toxins (pesticide) entering neighbouring water bodies and reducing water quality. Water quality is closely linked to both land use and climate; with projected changes in both these factors it is important to assess the future risk in order to protect water quality (Towers et al, 2012).

Climate change has the potential to increase diffuse pollution from agricultural land in a number of ways e.g. (DEFRA, 2012):

Monitoring diffuse pollution due to agriculture provides both a direct measure of the impact on the water environment as well as an indirect measure of agricultural soil erosion and the loss of nutrients. The indicator draws on SEPA’s assessment of all pressures affecting Scotland’s water bodies. This identifies individual waterbodies under pressure from diffuse pollution due to arable, livestock and/or mixed farming.

[1] Whilst agriculture is the main source, other sources include forestry and rural septic tanks

SEPA assess pressures on (level and source) and quality of water bodies (hydrological units within each river basin district) under the EU Water Framework Directive (WFD). Under this process, the presence of diffuse pollution due to livestock farming, arable farming and/or mixed farming is monitored. Table 1 shows the latest figures for Scotland’s waterbodies found to be under pressure from diffuse pollution originating from one of these sources.

Table 1:  Proportion of water bodies under pressure from diffuse pollution due to agriculture, 2014 (SEPA).

Overall this equates to just over 8% of all water bodies in Scotland currently being under pressure from diffuse pollution due to agriculture. The overall status of each water body is also assessed (as high, good, moderate, poor, or bad). Of those water bodies identified as under pressure due to diffuse pollution from agricultural sources, the vast majority are also, as a consequence, at less than good status.

The primary legislative driver for improving water quality is the EU Water Framework Directive (WFD) that led to the Water Environment and Water Services (Scotland) Act 2003 (WEWS Act). The WEWS Act provides powers to regulate water activities, including wetlands and groundwater as well as rivers, lochs, transitional waters (estuaries) and coastal water. River basin management planning (RBMP) in Scotland sets out how these improvements to Scotland’s water environment will be phased, and targets have been set for each waterbody for the time periods 2009-2015, 2015-2021 and 2021-2027.

Fundamental to the RBMP process is the legislative framework intended to ensure action on the most significant pressures on the water environment, supported by economic incentives, funding, and education to promote, encourage and support action. Working with farmers is part of a co-ordinated national level approach to reduce the risk of diffuse pollution. A partnership approach to reducing rural diffuse pollution is led by the Diffuse Pollution Management Action Group (DPMAG). In addition to its national strategy, DPMAG targets ‘Priority Catchments’ where a particular focussed approach is needed (SEPA, 2015)

Midway RBMP assessment in the Scotland and Solway River Basin Districts (RBD) identified good progress with regard to many measures, but also identified that targets for improvement were likely to be missed in a number of areas including rural diffuse pollution (SEPA, 2013a/2013b). The Second RBMPs identify that rural diffuse pollution remains by far the most significant pressure on water quality (Scottish Government, 2015a; Scottish Government & Environment Agency, 2015)

Table 2 shows that between 2008 and 2012 there was an increase in the overall number of waterbodies identified as under pressure from diffuse pollution due to agriculture. However, over this period there was also a considerable increase in the level of understanding of the water environment, as well as changes in assessment methodologies and environmental standards. One consequence of improvements to understanding and assessments is that real environmental change cannot be identified simply by comparing classification results across this period (SEPA, 2014a).  Over the second period (2012 to 2014) however, there was a significant decrease in affected water bodies that can be attributed to real environmental change.

Between 2009 and 2014, a targeted approach was taken with priority catchments being identified for the first RBMP. Around one example of poor practice was found per kilometre, and land managers were engaged with in order to highlight the necessary improvement measures. However, in the Scotland RBD, 6% of all water bodies had been identified for improvement of water quality, but only 3% were identified as likely to achieve this by 2015, largely due to rural diffuse pollution where over half the planned improvements were not on track. Rural diffuse pollution was also the main reason for failure in the Solway RBD (SEPA, 2015b). Contributing farming practices were more numerous and widespread than had been originally estimated, with multiple sources often on single farms. It therefore took longer than anticipated to improve understanding and to work with land managers to reduce these risks (SEPA 2013a; 2013b; 2013c).

Table 2 Number, area/length and proportion of water bodies under pressure from diffuse pollution due to agriculture, 2008-2014 (SEPA). 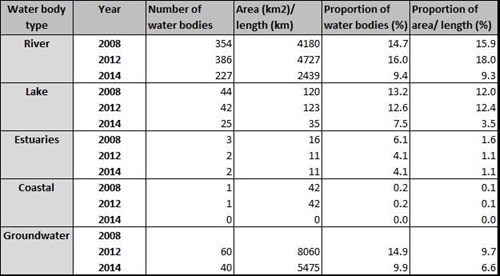 It is expected that pressure on Scotland’s water resources will increase in future as a result of both climate change and land use change. The predicted increase in arable area is likely to increase the risk of transport of sediments and associated pollutants to water bodies and therefore it will be necessary to continue to develop measures and incentives to encourage cultivation and land management techniques aimed at reducing this risk (Towers et al, 2012).

There has been considerable progress made to implement the measures generated by the first cycle RBMPs. Figure 1 sets out the general framework for the delivery of the programme and planned reduction of pressures on the water environment. 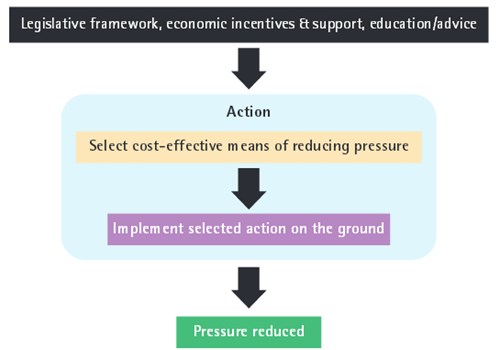 Over the course of the first RBMPs, SEPA has also improved the baseline knowledge of the pressures and impacts on the water environment which has resulted in changes in classification unrelated to any measures that have been implemented on the ground (SEPA, 2013a). The Limitations section provides further information.

However, the majority of the decrease in the number of water bodies under pressure due to rural diffuse pollution is due to the delivery of this policy and management programme rather than other factors, such as change in baseline knowledge or changing climatic pressure over this period.

SEPA has been progressively improving the understanding of the state of the water environment in Scotland, and since 2009 a number of changes have occurred to the way data is collected and analysed:

There are therefore some changes within the data over this period that reflect a change in understanding rather than an actual change in the water bodies.  The formal directions on the classification of water bodies also changed for 2013 onwards.

All the groundwater bodies were radically redefined in 2012, therefore 2008 data is not provided here as comparison would be misleading.

Waterbodies may be impacted by multiple pollution sources, in addition to agriculture (arable, livestock and/or mixed farming), and may also be subjected to other pressures due to physical condition of the water environment, pressure on water flows and levels, restrictions to fish migration and pressure due to the presence of invasive species.

SEPA have collated their RBMP (and related) documents together into a single location. This provides detail of the first RBMPs, progress reports, supplementary plans and consultation documents relating to these and the second RBMPs:

Scottish Government (2015b) Appendices to the river basin management plan for the Scotland river basin district: 2015 – 2027. Available online at: http://www.sepa.org.uk/media/163444/appendices-to-the-river-basin-management-plan-for-the-scotland-river-bsin-district-2015-2027.pdf

SEPA (2014a) A public consultation to inform the development of the second river basin management plan for the Scotland river basin district. Available online at: https://www.sepa.org.uk/environment/water/river-basin-management-planning/publications/

2008 and 2012 data on rural diffuse pollution supplied by SEPA from their All pressure database. 2014 data downloaded from Water Environment Hub (March 2016) 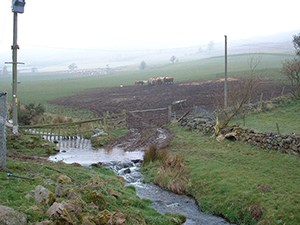