NA13 Abstraction of water for irrigation

Narratives: Suitability and productivity (agriculture), Water quality and availability, Resilience and resource use

Scotland-wide abstraction for irrigation during 2013 was estimated as 16.9 million cubic metres.

Crops which are heavily reliant upon irrigation (potatoes, fruit, field-scale vegetables), for both growth and in response to demands for marketable quality form an important part of Scottish agriculture. Although these crops only account for around 9% of cropped area, income from these crops is approximately equal to that generated by grain crops which dominate the rest of arable cropping (Scottish Government, 2014).

The volume of water abstracted for irrigation is closely linked to climate.  Irrigation is required when dry periods lead to soil moisture deficits which in turn may impact crop productivity.  Irrigation is a seasonal activity, typically occurring during the main growing season between March and October.

Climate change is projected to lead to changes in both the supply of water (from precipitation and evapotranspiration losses) and in water demand as temperatures increase (Brown et al., 2012). Some crops that are currently irrigated are likely to require greater irrigation depths and other previously rain-fed crops are likely to need irrigating (Knox et al., 2012). Furthermore, indirect effects of climate change via potential improvements in land capability with consequential development of new agricultural opportunities in some areas may result in an increase in typically irrigation-fed crops.

From 2014, the Scottish Environment Protection Agency (SEPA) began reporting, in autumn, the estimated total monthly and annual abstraction by irrigation for each Area Advisory Group (AAG) region used within the River Basin Management Planning process. This data is based upon data submitted to SEPA by operators as a condition of their abstraction licences. This indicator is based upon an evaluation by SEPA of each regions uptake factor (% of licenced amount used) from the data that have been supplied and applied to each abstraction where data are missing.

The vast majority of this abstraction (88%) occurred in June, July and August.

Irrigation demand in the 2050s is projected to increase by up to 100mm per year (Brown et al. 2012)   To put this figure in context, the typical values for irrigation in areas with highest demand in Scotland are currently around 170 mm per year.

This projected increase in irrigation demand is due to the UKCP09 projections of lower summer rainfall and higher temperatures leading to greater evaporation. Many areas that experience a reduction in available water also contain high-value crops that are likely to require additional irrigation water, unless alternative measures are put in place. Furthermore, there may be additional water demands from crops that are currently not irrigated, such as cereals, which may result in an expansion of the currently irrigated area (Brown et al., 2012).

The highest volumetric changes in irrigation demand are projected in the Fife and Angus regions. Figure 1 highlights that this area (Tay AAG) already accounts for the highest abstraction levels of any AAG region. Particularly vulnerable are smaller catchments that are not supplied by large rivers that have their source in the west, though larger catchments may also experience increasing problems, particularly in extremely dry years (Brown et al., 2012).

Declining river flows may require regulatory intervention in order to maintain environmental flow conditions. SEPA are currently trialling a new approach to abstraction management by taking a whole catchment approach, working with land managers in catchments that have been identified at risk of impact from irrigation abstraction and focussing on crop requirements, water efficiency, irrigation programming and use of storage ponds (SEPA, 2013).

Figure 1 Irrigation abstraction per Area Advisory Group (AAG) region (2013). Note that the Solway-Tweed RBD includes abstraction only within the Scottish part of this cross-border area.

Figure 1 shows the Scotland-wide figure of 16.89 million cubic metres broken down by regions known as SEPA Area Advisory Groups.  The clear distinction between abstraction levels for AAG regions in the East and West reflects the relative dominance of arable farming in these regions, as well as the higher rainfall levels in the West.

SEPA has only been licencing abstractions since 2005 and has only a few years of operator data returns so a historical trend analysis is currently not possible for this indicator.

However, it can be assumed that this indicator will have a relationship with the summer low flow indicator, NB27 Summer low flow events in Scottish rivers (Normalised Flow Index), for which trend analysis is currently possible.

This indicator will only be available for the years 2013 onwards.  Prior to this, comprehensive actual irrigation data are not available.  It will therefore be many years before a trend analysis will be possible.  However, it can be assumed that this indicator will have a relationship with the summer low flow indicator, NB27 Summer low flow events in Scottish rivers (Normalised Flow Index), for which trend analysis is currently possible.

Richard Morris of SEPA for collating and analysing the irrigation data and developing the interpolation methodology. 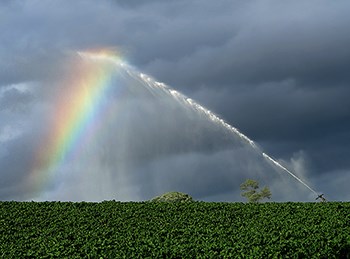