The report on ‘The State of Scotland’s Soil’ identifies soil erosion as a major threat to loss of soil function and a decrease in water quality (Dobbie et al., 2011). Specifically, soil erosion can lead to the loss of soil organic material, resulting in reduced soil fertility and the loss of soil carbon, releasing stored carbon to the atmosphere thereby increasing greenhouse gas emissions (Defra, 2012). Soil erosion is also detrimental to watercourses, leading to increased sedimentation and, in the case of soil erosion on arable land, increased pollution by fertilisers and pesticides.

Rates of soil erosion may increase with increasing rainfall intensity (Defra, 2012). Climate projections for Scotland indicate more heavy rainfall days (i.e. days with more than 25mm of rain) in both summer and winter, and an increase in winter rainfall (Defra, 2012). Projected climate change is also likely to lead to a significant increase in the land area suitable for arable farming (Defra, 2012).

On arable land, there is a heightened risk of soil erosion when soil is left without any protective vegetation cover between crops, particularly where fine seed beds have been prepared and the crop is yet to emerge. Bare soil is vulnerable to erosion by wind and rain. Use of agricultural machinery can also increase erosion risk (Defra, 2012). In the lowlands, soil that is left bare following cultivation is particularly vulnerable to wind erosion. On sloping ground, tillage (ploughing) tends to cause downslope movement of soil. Surface run-off can cause water erosion when rain falls on already saturated soil, or when the intensity of rainfall is greater than the infiltration capacity of the soil (Dobbie et al., 2011).

This indicator quantifies and monitors the uptake of agricultural production methods that reduce the risk of soil erosion. The specific methods considered are: reduced or zero tillage, maintaining soil cover and the presence of landscape features that can act as a barrier to erosion.

Zero tillage: The practice of sowing crops into the stubble of previous crops, known as direct drilling, can completely avoid the need for tillage (Morris et al, 2010).

Reduced tilling has varying benefits and drawbacks depending on local soil type and environmental conditions. The availability of labour and machinery is also an important consideration, so there is no ‘one size fits all’ solution, rather a decision on tillage system(s) has to take local factors into account (Ball & Bingham, 2003). For example, in the Inverness district where soils are light, barley stunt can be reduced by using zero tillage (direct drilling). Where soils are very stony, zero tilling can significantly reduce time and wear on machinery (Ball & Bingham, 2003).

There are some barriers to the uptake of minimum tillage in Scotland. The wet climate is less compatible with reduced and zero tillage methods than much of the UK, as ‘drier and more stable structured soils are best suited to minimum tillage’ (Ball & Bingham, 2003). There are periods when the soil is too wet for the appropriate machinery to be used. Winter crops are particularly suited to reduced tillage systems, particularly winter wheat and winter oilseed rape, however in Scotland a higher proportion of spring barley is grown. There is also more rotational cropping in Scotland. The equipment for reduced tillage is expensive, so it is more cost-effective on larger farms where that investment is more quickly recouped through savings in labour costs, but Scotland tends to have smaller farm units compared to the UK as a whole (Ball & Bingham, 2003). These issues associated with farm scale can be addressed by contracting in labour and machinery, or sharing with neighbouring farms (Ball & Bingham, 2003).

Landscape features: Established field boundaries such as trees and hedges can provide a wind barrier, helping to reduce soil erosion. Further benefits include acting as a barrier to leaching from soil and water movement, and improving bio-security by providing a barrier between fields. They also provide shelter and shade for livestock and a habitat for wildlife.

The latest data is from the Scottish Survey of Farm Structure and Methods, 2016. Similar surveys were carried out in 2010 and 2013, and where these provide comparable data it is included here. Data is expressed as a percentage of the total cultivated land area, about 790,000 hectares in 2015/16 (The Scottish Government, 2016).

The area of arable land (excluding glasshouse crops, permanent crops and permanent grass) under each type of tillage method is shown in Figure 1. 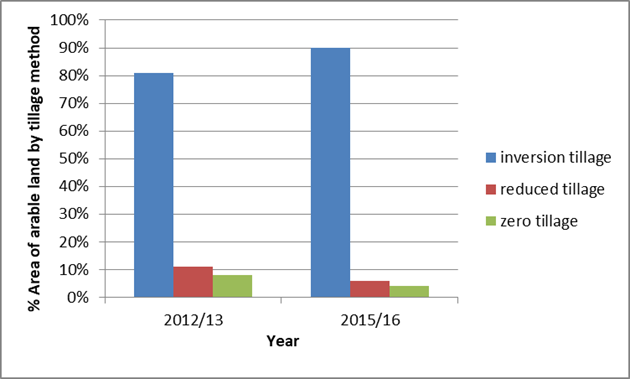 2016: Conventional inversion tillage was used on 90% of cultivated land in Scotland; reduced tillage on 6% and zero tillage on 4%.

2010: In the 2010 survey, zero tillage was not included, because the Scottish Government had been advised that this method was not used in Scotland (Kerr, 2015). Comparing just the tilled land in 2009/2010, the proportion of inversion tillage and reduced tillage was the same as in 2013, at approximately eight to one.

The area of land sown or cultivate by soil cover method is shown in Figure 2. 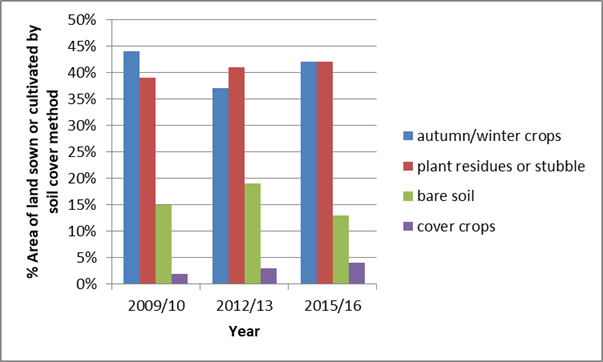 2013: Over the 12 months to March 2013, the most common type of soil cover reported was the use of plant residues or stubble on 41% of land. Autumn and winter crops were planted on 37% of land and cover crops on a further 3%, with 19% of cultivated land reported as being left bare.

The proportion of land left bare fell to 13%, from 19% in 2013. This may be because of better weather, allowing winter crops to be sown (The Scottish Government, 2016).

Landscape Features:  While there is no data on the proportion of holdings that have boundary landscape features, the 2010 survey provides information about the number of holdings that established or maintained some form of boundary over the preceding three years. This data was not collected in 2013 and is unlikely to be collected in future (Kerr, 2015). 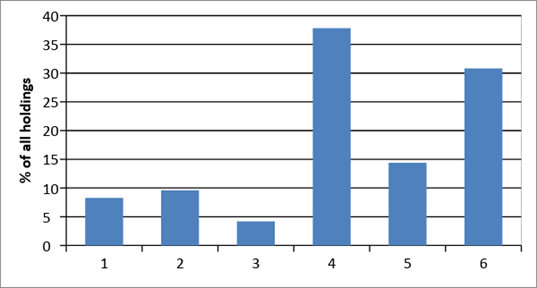 Currently around 6% of Scotland’s land is considered to be prime land  (Defra, 2012). Analysis using UK climate projections, both UKCIP02 (Brown et al., 2008) and UKCP09 (Brown et al., 2011), indicates the area of prime land is likely to increase by 20 - 40% . This increase in the amount of land for arable farming will be beneficial in increasing productivity and therefore food security but will also increase the area subject to erosion risk from machinery use or land left bare between crops.

An increasing area under arable farming increases the amount of land exposed to the risk of soil erosion; particularly through soil that is managed using conventional tilling practices being left bare. This may increase the loss of topsoil and soil carbon, resulting in reduced soil fertility, increased greenhouse gas emissions and increased sedimentation and pollution of watercourses. This enhanced risk may be offset by the uptake of the soil conservation methods described above.

Projected wetter winters may constrain the uptake of conservation tilling in future, as it may become more difficult to find opportunities for tilling when the soil is not too wet, which risks soil compaction (The Scottish Government, 2008).

However, the reduced labour and fuel costs attached to minimum and zero tillage methods are a key driver in their uptake (Ball & Bingham, 2003). This is supported by policy measures including the Scottish Government’s Basic Payments scheme (The Scottish Government, 2015). To qualify for payments under the scheme, farms must comply with Good Agricultural and Environmental Conditions (GAEC). Reducing the risk of soil erosion may help achieve compliance. Also, the management options for payment under the Agri-Environment Climate Scheme include the retention of winter stubble, in order to mitigate the risk of soil erosion as well as benefitting wildlife (The Scottish Government, 2015).

Lack of historical data means it is not possible to identify trends at present.

The uptake of the measures considered in this document is dependent on a number of drivers, and provides a variety of benefits, as mentioned above. Barriers to adoption include valid physical reasons for techniques being inappropriate in some circumstances. Therefore the adoption or non-adoption of these techniques does not provide a straightforward measure of adaptation.

Lack of continuity in the data source prevents direct comparison between surveys for some techniques, and may prevent trends being identified in future if no other data source is available.

Zero tillage was excluded as an option in the 2010 survey as the Scottish Government were advised this method was not used in Scotland, but it was included in 2013 and in 2016. Data on landscape features was collected in 2010 but not in the two subsequent surveys.

The next survey is due in 2020, however with Brexit there is a question over whether Scotland participates. In any event it is likely that the Scottish Government will still collect the data (Cooke, M., 2018).

Only larger holdings are included in the 2013 survey; however these account for 98% of agricultural land so are broadly representative. The holdings eligible for inclusion in the 2016 survey accounted for 96% of agricultural land.The Countryside Survey includes data on the extent and condition of hedgerows which is included in related indicator NB3

The Scottish Government. Results from the EU Farm Structure and Methods Survey, 2013 (Kerr, 2013)

Results from the Scottish Survey of Agricultural Production Methods, 2010 (Kerr, 2012)

Results from the Scottish Survey of Agricultural Production Methods, 2010 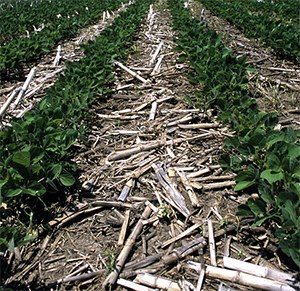