Narratives: Climate change risks to society and our capacity to adapt

SCCAP objectives:
B3: Increase resilience of buildings and infrastructure networks to sustain and enhance the benefits and services provided
S1: Understand the effects of climate change and their impacts on people, homes and communities

Trend
Download the full indicator card
At a glance

Why is this indicator important?

39% of Scottish households are in fuel poverty.   A rise of 4 percentage points between 2012 and 2013 brought an additional 100,000 households into fuel poverty, making a total of 940,000 in Scotland.  Around 252,000 (10.5%) of these households were in extreme fuel poverty (SHCS, 2014). Fuel poverty is affected by a number of underlying drivers: fuel costs and household income, the age and type of building, and is offset by any energy efficiency measures that have been implemented.  Of these, the price of fuel is the most significant driver by far (see indicator CRS61: Number of households in Fuel Poverty).

This indicator looks at domestic debt held with energy companies for the supply of electricity and gas as a proxy for better understanding the contribution fuel price makes to fuel poverty. Any increase in mean winter temperatures resulting from a changing climate (UKCP09, 2009) should see a reduction in energy demand for winter heating (Scottish Government, 2014), reducing the number of households in debt and helping to achieve the Scottish Government target for the eradication of fuel poverty- an ambition established in the 2001 Housing (Scotland) Act.

At the end of 2013 there were 2.61 million electricity and 1.97 million gas account holders in Scotland.   Of these, around 4.5% were in debt, where ‘debt’ is defined as those account holders in debt and having a repayment plan in place with their energy supplier that is scheduled to last longer than 91 days (13 weeks).  The proportion of gas and electricity customers with such an arrangement is broadly equal (4.7% and 4.3% respectively) equivalent to a year-on-year fall of 4% for electricity but a 6% rise for gas account-holders.

A data review conducted by OFGEM in 2012 recognised that this definition of ‘debt’ failed to account for customers who had yet to set up a repayment schedule with their supplier.  The category of ‘in arrears’ was therefore introduced.  Including this category increases the proportion of account-holders (in debt or in arrears) to 6.5% (gas) and 5.9% (electricity) equivalent to 128,308 and 153,112 households respectively.

Energy accounts in Scotland are more likely to be in debt than anywhere else in Great Britain (6.2% of households gas account holders and 5.7% electricity) but are also more likely than elsewhere to have an arrangement in place to repay that debt (Voronkova, 2014). 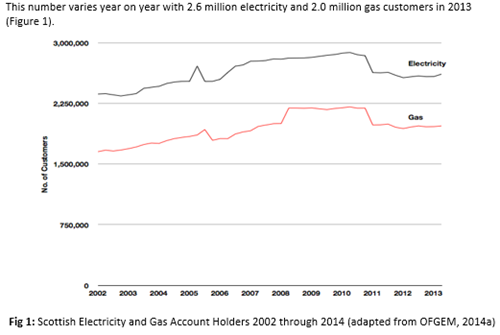 The proportion of those customers in debt (and in arrears) appears to have been falling for both electricity and gas, at roughly equivalent rates (Figure 2). 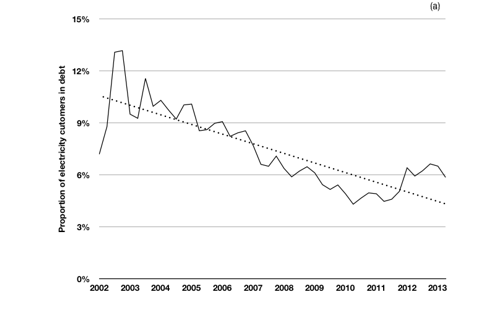 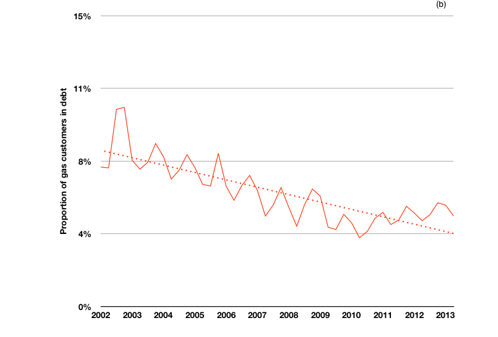 Evidence of year-on-year changes in indebtedness reveals a slightly different picture. A 3-year moving average of the year-on-year change in the indebtedness amongst electricity and gas customers shows a fall until 2007/08 (gas) and 2009/10 (electricity) and then a steady rise ever since (Figure 3). This reflects the increase in the weighted fuel index (SHCS, 2014)[1], also upwards over this same period.

Under the Standard Licence (condition §27.9) for electricity and gas supply, suppliers are obliged to offer alternatives to those in debt: Pre-payment Meters (PPMs) where it is safe and practicable to do so; budget payment schemes[2] and Fuel Direct[3]. Broadly, this appears to be common practice, the number of disconnections falling from a high of 171 (gas) and 184 (electricity) in Scotland in 2007/08 to just 4 (gas) and 6 (electricity) in 2013 (Figure 4). 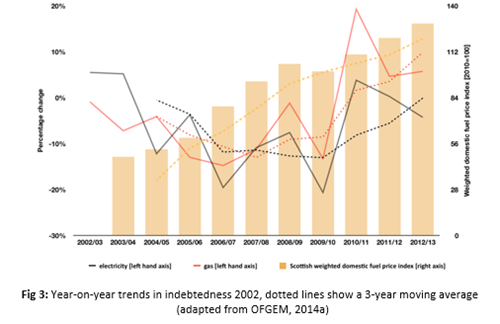 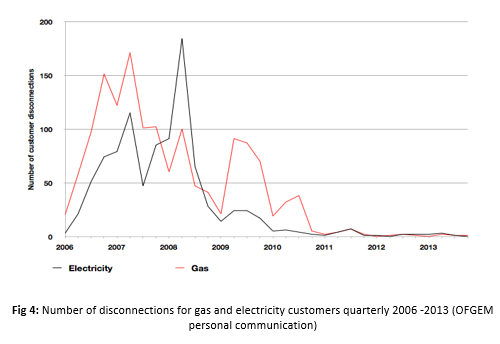 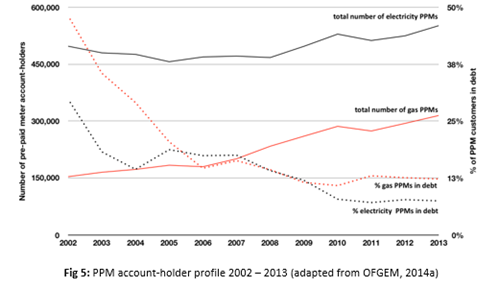 Energy bills may be paid directly by the Department of Work and Pensions (DWP) via the Fuel Direct scheme from social security benefits.  This is usually considered a last resort.  Just over 5,000 (5,191 electricity and 5,172 gas) account holders made repayments using this facility in 2013 representing about 0.2% and 0.3% of the user population for electricity and gas account-holders respectively.  These numbers have been falling for electricity account holders over the last decade with no significant trend for gas (Figure 6) 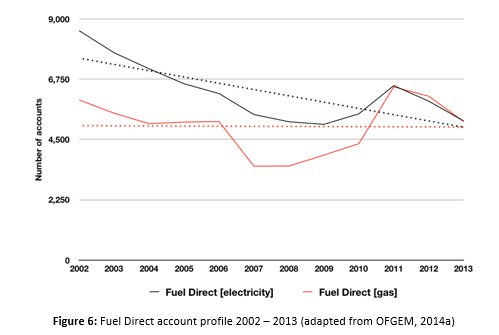 [3] Fuel direct - also known as Third Party Deductions - is administered by the Department of Work and Pensions (DWP) to facilitate direct, fixed-amount payments for energy debt and ongoing consumption from specific social security benefits. The scheme is generally considered by suppliers and DWP to be a ‘last resort’ for customers who are in payment difficulty, receive social security benefit and have no other suitable method of repaying debts associated with their gas and/or electricity accounts.

OFGEM provide a ‘forward look’ at gas and electricity prices on a rolling 12-month cycle using the Supply Market Indicator (SMI) (Figure 7). The SMI provides a breakdown of electricity and gas costs covering generating (wholesale) and distribution, social and environmental levies.  The index also estimates both the average customer bill (supplier’s revenue) and the supplier’s pre-tax profit margin (per customer). 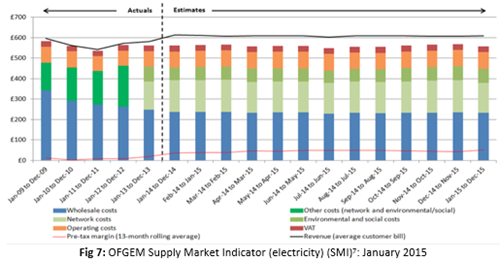 Continued economic growth of around 2% is forecast in 2015 (2% - 2.2%) and 2016 (1.8% - 2.1%) (OCEA Scottish Government, 2015) with a modest fall or flat unemployment rate overall (FAI, 2014 Chapter 4: Scottish Labour Market).  Taken together with the current state of the Scottish economy – Gross Value Added (GVA) 2.7% and unemployment at 5.5% against a UK-wide rate of 6% - it would be reasonable to expect that real wages would also rise even though they have been largely negative for the last 5 years.  As noted in FAI (2014) the latest UK figures from the Labour Force Survey on Average Weekly Earnings show that a sustainable growth in real wages is not yet in sight.  Provisional regional data for Scotland for 2013 suggest that “median real wages moved into positive territory at the end of that year” but this has yet to be substantiated.

Uncertainty over real wages might cause the indebtedness trend to flatten slightly, particularly for electricity where the fall in consumer bills is in any case marginal.  Overall though a continued downward trend in energy account holder indebtedness in the short term is likely.

The overall trend in the number of account-holders in debt to suppliers of domestic electricity and gas is downward both in absolute numbers and percentage terms. Nonetheless, at the end of 2013 nearly 6% of electricity account holders were in debt - 153,112 households - of whom 73% had long-term repayment plans in place while 27% were in arrears with no plan for repayment.  This was broadly similar to the overall position at the end of 2012 although the number of those in long-term debt had reduced by just over 4% but those in arrears were up by 9.5%, around 3,500 account-holders.

The situation for gas account holders was more acute with 6.5% in debt – 128,308 households - with a similar profile for debt repayment arrangements: 71% with plans in place; 29% without.  This represents an increase of over 7% (9,083 account holders) on the position in 2012 and reveals an upward trend in the number of gas account holders in debt year-on-year.  Gas is used for heating by 78% of households in Scotland (SHCS, 2014).

Considered over the longer term (Figure 3) these movements suggest that the price of gas is likely to be the critical determinant of fuel price as the primary driver of fuel poverty (see indicator CRS61: Number of Households in Fuel Poverty[1]).

Notwithstanding improving economic conditions – unemployment down, wholesale prices down – a significant proportion of the population appear to find it difficult to budget for energy use. Suppliers’ social obligation not to disconnect under the gas and electricity licencing agreements means that many of those in debt are offered PPMs.  It is worth noting the success of the suppliers’ social obligation in reducing the number of disconnections over the last seven years (Figure 4), demonstrating the effectiveness of well-designed interventions.

Across Great Britain as a whole, around 80% of new PPMs installed in 2013 were to manage debt[2].  In Scotland only 7% of PPM account holders were in debt at the end of 2013 but 18% of households using PPMs are classified as fuel poor (Preston et al., 2014). Citizens Advice (Vyas, 2014) research into consumers’ use of prepayment meters found that PPM users are more likely to be on lower incomes than the average energy customer and many consumers like PPMs because they help them budget and avoid debt[3]. The cost differential though is significant with PPMs being the most expensive method of payment even once the additional ‘supply costs’ are taken into account – see for example the OFGEM Supply Probe (2008).  Drawing on a number of different texts Preston et al. (2014) identify 5 key areas for policy intervention in delivering a competitive and accessible market, including developing a fair set of tariff offerings for PPM customers and supporting switching.

Consumer groups also have raised concerns that PPMs are being installed too early in the debt path, and that customers on low incomes are being encouraged on to prepayment meters without sufficient discussion as to the advantages and disadvantages for that customer.   Payment by PPM is typically more expensive than paying by direct debit, OFGEM estimates show that annual dual fuel bills paid using prepayment meter are on average £80 higher than bills paid using direct debit[4].   Suppliers explain that this difference in cost between the two payment methods is due to the higher customer servicing costs.

Voronkova (2014) notes that “as more and more prepayment meters are fitted as an alternative to disconnecting consumers’ supply (OFGEM) recognize(s) that it is becoming increasingly important that we monitor the issue of self-disconnection and suppliers responses to consumers in this situation. We have been working with industry and Citizens Advice to better understand the extent of this problem, and how suppliers can best identify and monitor self-disconnection and help target support and advice at those in need. We have committed to working with Citizens Advice over the next year to agree a framework for reporting this information.”

Smart meters offer the most benefits to PPM customers providing real time information on energy use and price at different times of day and night, supporting decisions about the amount of energy used at any given time of day to ensure the best savings.  The use of smart meters would supplement or replace other methods of monitoring energy consumption.

[1] This in itself creates an energy security risk, although this is outside the scope of the current indicator.

Chisholm A. and Pardoe A. (2013) All Change: why welfare reform should matter to creditors and utility companies.  Citizen’s Advice Bureau.  Available at: www.citizensadvice.org.uk/index/policy/policy_publications/er_benefitsandtaxcredits/all_change_welfare_reform.htm (accessed February 12th 2015)

Svitlana Voronkova of the Consumer Policy Team at OFGEM who provided consolidated data for customer disconnections as well as authoring the 2014 Annual Report.