Narratives: Climate change risks to society and our capacity to adapt

SCCAP objectives:
S2: Increase the awareness of the impacts of climate change to enable people to adapt to future extreme weather events
B3: Increase the resilience of buildings and infrastructure networks to sustain and enhance the benefits and services provided

After transport, housing costs including fuel and power are the second most significant element of household expenditure in Scotland, accounting for 13% of average household spend.  Of this, around half is attributable to fuel and power, which is equivalent to some 6% of total household spend and on average around £1,300 p.a. per household (ONS, 2014). Households in fuel poverty in Scotland are identified as those spending over 10% of their income on fuel and power.

Our understanding of how climate change may affect fuel poverty rates requires consideration of the underlying factors that contribute to it: household income, energy efficiency of the housing fabric and to a lesser extent household appliances and above all, the cost of fuel.   The state of repair of a dwelling may also contribute to fuel poverty but is considered separately (CRS58: Number of Households falling below SHQS and Tolerable Standard) as it also has consequences for health and well-being.

Changes in mean winter and summer temperatures will contribute to this complex suite of drivers, resulting in changes in fuel use for heating, affecting expenditure on domestic energy.  Increased mean winter temperature could result in a reduction in fuel use, which would positively contribute to the eradication of fuel poverty, a target identified in the Housing (Scotland) Act 2001 as well as to the emissions reduction target of the Climate Change (Scotland) Act 2009.

CRS58: Number of households/people falling below the SHQS & Tolerable Standard

CRS62: Domestic debt held with energy companies for the supply of electricity and gas

Fuel poverty rates are influenced by:

[1] Adjusted to account for variation in the size and composition of the household
[2] EPCs are required whenever a building is sold or rented to a new tenant.

Trends in fuel poverty from 2003/04 are shown in Fig. 1. While the picture is slightly complicated by methodological changes (the fuel costs method in 2011, and energy modelling changes in 2010 and again from 2014), the general trend in fuel poverty was increasing from 2003 to 2013. Subsequently, rates have fallen for three consecutive years to 2016. Rates of extreme fuel poverty have similarly decreased since 2013. After peaking in 2014, the fuel price index fell in 2015 and again in 2016. 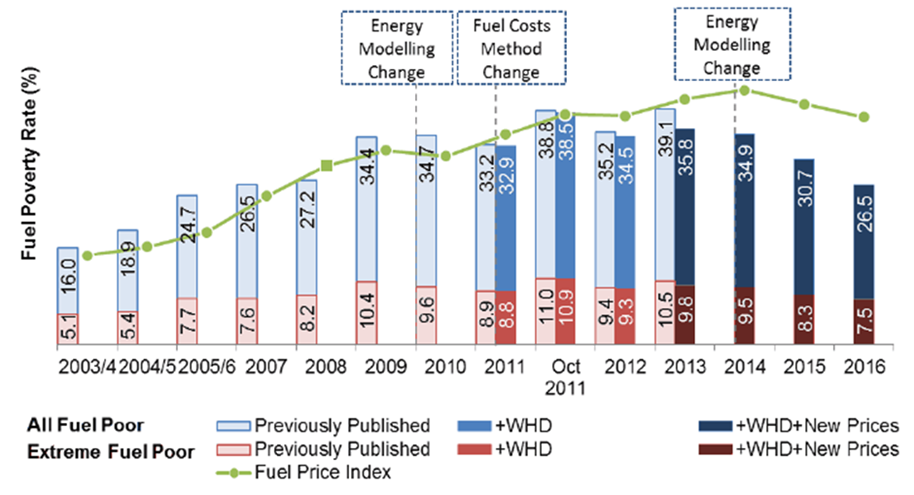 The Fuel Poverty (Target, Definition and Strategy) (Scotland) Bill was published on 27 June 2018, together with the draft Fuel Poverty Strategy for Scotland. The Bill has three key aims: (i) to set a new target for fuel poverty; (ii) introduce a new definition of fuel poverty that will focus Scottish Government support on those who need it most, no matter where they live in Scotland; and (iii) mandate the production of a new long-term fuel poverty strategy (Scottish Government, 2018b).

The proposed statutory target is for not more than 5% of households to be in fuel poverty by 2040. This target ‘recognises that there will always be households that move in and out of fuel poverty due to changes in their income and energy costs’ (ibid).

The Bill acknowledges the need to address all four drivers of fuel poverty: energy efficiency; income; energy costs; and how energy is used in the home. It further acknowledges that achieving the target will require concerted action not just from the Scottish Government, home owners and tenants, but also by local authorities, landlords and the third sector (ibid).

The Energy Efficient Scotland Route Map3 provides the delivery mechanism for improving energy efficiency, while the Scottish Government’s customer-facing home energy efficiency programmes, Home Energy Scotland (HES), will continue to provide householders with advice on the best use of energy, and on energy efficiency schemes and funding mechanisms.

The draft Strategy also proposes actions to reduce poverty and maximise household incomes, including those set out on the Fairer Scotland Action Plan4 and the Tackling Child Poverty Delivery Plan5, together with the creation of jobs in a low carbon economy. Fuel prices are a crucial driver of fuel poverty; however as energy policy is decided by the UK Government, the Scottish Government has limited influence over fuel prices.

The Fuel Price Index fell in 2015 and 2016, however since then oil prices in particular have rebounded. In February 2018, a UK Parliament research briefing noted that the medium to long-term pressures on fuel prices were mixed, with falling wholesale prices offset by increasing infrastructure costs (House of Commons Library, 2018).

Electricity Market Reform (EMR) will attempt to introduce more liquidity into a wholesale market dominated by just 6 generators by incentivising the development of these and other types of low carbon technologies and low carbon generation. Complementary policies will help also to clarify the role of demand-side response, storage and interconnection, and the development of a smarter grid.

The cost-benefit of unconventional fuels remains contested with hydraulic fracturing (fracking) subject to moratorium, while the full lifecycle environmental, economic and social impacts are more fully evaluated, and underground gasification at an even earlier stage of development.  Subsidies to the fossil fuel industry are currently six times that to the renewables industry, amounting to £2.6Bn p.a. through different tax instruments (Whitley, 2014). This in itself is a financial constraint on the research and development required to achieve cost-effective supply-side targets in renewable electricity, heat and transport that could complement domestic demand management.

Met Office data8 show that annual mean winter temperatures in Scotland since the beginning of the millennium have been in the range of 0.4°C and 4.3°C.   Mean winter temperature is likely to rise by between 1°C and 3°C by 2050 in the low emissions scenario and 2°C and 5°C for the same period in the high emissions scenario9 (UKCP09, 2009).  If this is indeed the case then the need for heating fuels in winter would likely decrease with corresponding reductions in fuel poverty.  More work would be required to quantify the effect.

Mean summer temperature is likely to rise by between 1°C and 5°C by 2050 in the low emissions scenario10 and 2°C and 7°C for the same period in the high emissions scenario.  This may have implications for air quality and overheating in certain building types, which would have a negative consequence for fuel poverty.  Again, more work will be required to quantify the effect but based on current projections this would seem to be minimal.

Based on current evidence, any increase in cooling degree-days11 is unlikely to be significant or widespread in the medium term (to 2027).  Where overheating does occur it will probably remain localised to particular urban dwelling types, resulting in additional fuel costs for cooling. Longer term (to 2080) urban overheating is likely to become more commonplace.assets. The decommissioning of fossil fuel based power stations in Scotland will increase the need for imported energy, if biomass and hydro cannot cover the baseload.  Maintaining the current levels of exports – 28% of total electricity generated in 2013 (Scottish Government, 2015a) - depends in a large part on the strategic direction of the National Grid.

There is substantial variability in the distribution of fuel poverty by local authority area, shown in Figure 2. 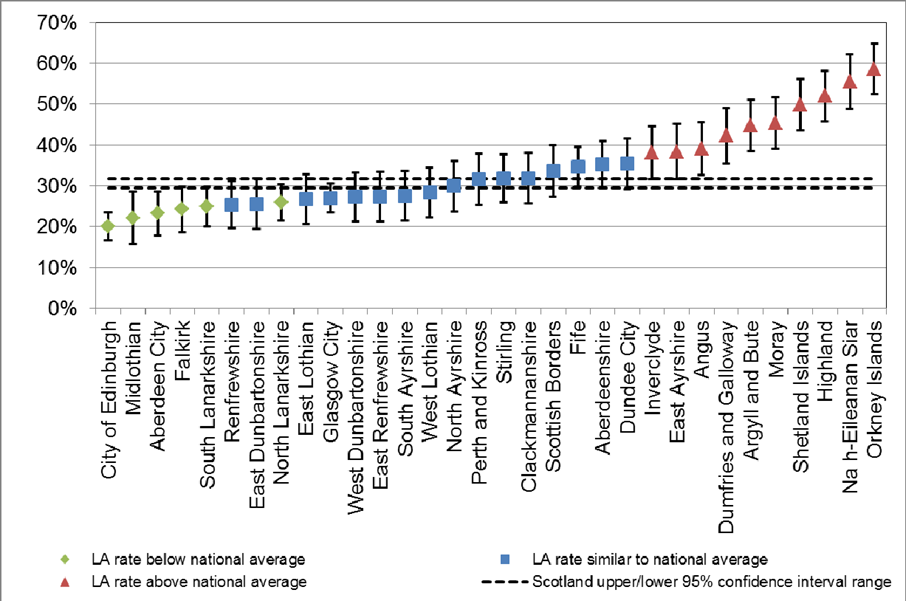 Figure 2: Percent of dwellings in Fuel Poverty by local authority, compared to the Scotland average (SHCS, 2018)

Some of the local authority areas with the highest rates of fuel poverty, including Orkney Islands, Na h-Eileanan Siar, and Shetland Islands, also had a higher than average proportion of energy inefficient dwellings (rated EPC F or G); while some with relatively low fuel poverty rates, including the City of Edinburgh and Falkirk, had a higher than average proportion of more energy efficient properties (rated EPC B or C) (SHCS, 2018).

The decrease in the price of domestic fuels accounted for nearly two-thirds (2.7 percentage points) of the reduction in fuel poverty rates between 2015 and 2016. A further third (1.5 percentage points) is attributable to improvements in energy efficiency, and the reminder by the increase in household incomes (SHCS, 2017a).

Mueller et al. (SHCS, 2014) provide a model of the relative influence of the underlying drivers on fuel poverty rates for 2012/13.  This model could usefully be applied to understanding these influences over the entire time series; further investigation would be required.

[2] The Standard Assessment Procedure (SAP) is used predominantly to assess the energy ratings of new homes.  Its climate data is based on Latitude 53.4°N (Nottingham), which is arguably not useful for Scotland, especially Highlands & Islands. The National Home Energy Rating (NHER), which preceded SAP, takes into account both occupancy and exposure.

rdSAP is a quick assessment technique used for existing dwellings based on a set of standard assumptions. Hard to treat homes are by their nature ‘non standard’.  rdSAP also makes assumptions about the heating regime which may not apply for those in fuel poverty and post-intervention assessments may show the same or more energy use to achieve comfort levels which are un-quantified in the method (Kelly et al., 2011)

ONS (2014) How has Household Spending Changed over Time?, available at: http://www.ons.gov.uk/ons/rel/family-spending/family-spending/2014-edition/sty-the-headlines.html

Scottish Government (2010a) Conserve and Save: Energy Efficiency Action Plan for Scotland, available at: www.gov.scot/Resource/Doc/326979/0105437.pdf.

Scottish Government (2014b) The Energy Efficiency Standard for Social Housing (EESSH): background and guidance for social landlords, available at /www.gov.scot/Resource/0044/00447123.pdf