Narratives: Extreme weather and infrastructure, Climate change risks to society and our capacity to adapt

SCCAP objectives:
S1: Understand the effects of climate change and their impacts on people, homes and communities
S2: Increase the awareness of the impacts of climate change to enable people to adapt to future extreme weather events
S3: Support our health services and emergency responders to enable them to respond effectively to the increased pressures associated with a changing climate

Trend
Download the full indicator card
Why is this indicator important?

Private water supplies (PWS) - internationally referred to as Small Community Supplies - serve around 3.5% of the population in Scotland[1], although a significant number of visitors and tourists will also use these supplies.  Water sources include surface water (streams, rivers and private impoundment reservoirs) and groundwater (wells, boreholes or natural groundwater springs). Figure 1 shows the distribution of all PWS across Scotland (2013). 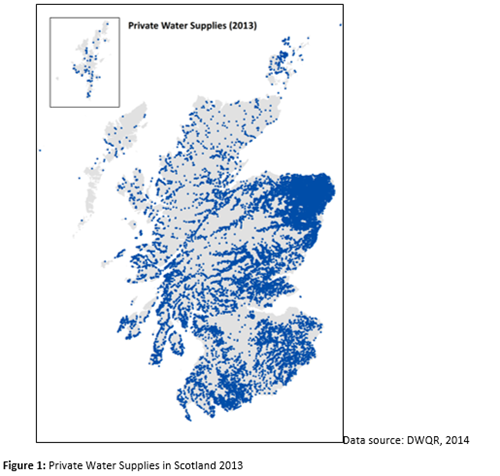 The quality of the water from these supplies can present a risk to health if not properly managed.  Extreme weather events exacerbate this risk through potential contamination (flooding) from sewerage and chemical and other field run-off as well as temporary or permanent loss of supply (cold, heat) due to frozen pipes and pumping equipment, for example, or loss of supply altogether during sustained periods of drought, although these particular risks are not considered further here.  Neither does this indicator consider directly the risks to public health that may result from poor water quality.

For the purposes of flood risk management, Scotland has been separated into 14 Local Plan Districts. These are based on river catchments and therefore cross both administrative and institutional boundaries (SEPA, 2011).  SEPA is responsible for producing a Flood Risk Management Strategy for each Local Plan District by the end of 2015. Using this guidance, the ‘lead’ Local Authorities for each District will then develop Local Flood Risk Management Plans, which take the strategies and turn them into Local Delivery Plans, with implementation dates and corresponding funding requirements.  They will also provide a mechanism to co-ordinate actions at a local level for the next six years (the flood risk management planning-cycle time); interim and final reports are to be produced in 2019 and 2022 respectively (SEPA, 2012).

Local resilience is in part dependent on access to the water provided by private water supplies.  The projected impact of climate change in Scotland will see increased winter precipitation in all regions for all emissions scenarios but particularly in the West of Scotland (Met Office, 2009) with a corresponding increase in flood risk. A clear picture of exposed water supplies will contribute to our understanding of overall societal vulnerability to flooding.

[1] Compared with 1% of the population of England and Wales: http://www.dwi.gov.uk/private-water-supply/index.htm 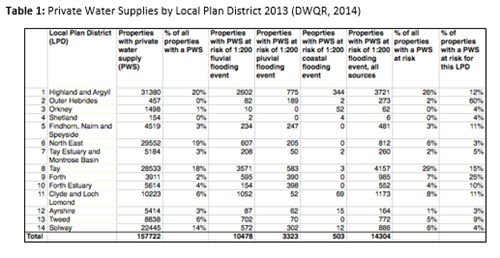 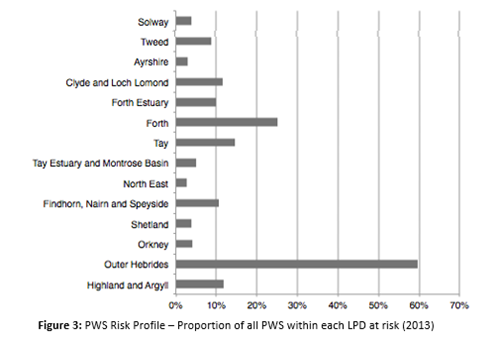 For most regions, fluvial flooding provides the greatest risk. The exposure of PWSs to different sources of flooding is illustrated in Figure 4. 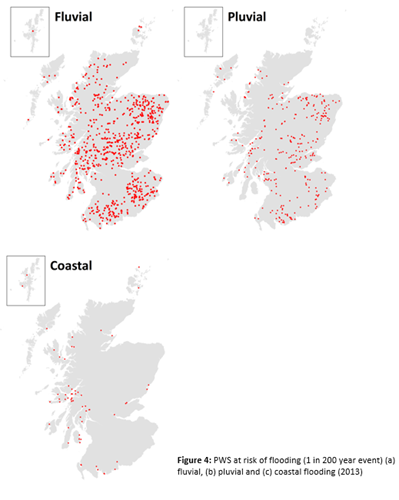 [1] This number relates to the Scottish population only.  Many more people – tourists and visitors – also would use these services.

The number of private water supplies in Scotland has fallen by just over 4% in the 12 years since 2003, although this fluctuates year-to-year.  In the same period, the proportion of the population reliant on these supplies has almost doubled (1.63% in 2003 to 3.53% in 2014).  Historically, the change in the risk profile of those supplies to flooding is unknown as SEPA’s flood hazard maps have only been available since 2012, following publication of the National Flood Risk Assessment (SEPA, 2011).  This indicator provides an initial estimate of that risk[1].

[1] Clearly, equivalent distributions from previous years could be mapped to the current flood risk, if the spatial data were available.

The summary climate projections for Scotland are warmer and drier summers and warmer and wetter autumns and winters.  However, convective storms, associated with surface water flooding, are likely to be more intense in summer months. Sea level rises and storm surges are also likely to lead to an increase in flood risk (Met Office, 2009).

The implication of these trends is that “with relatively small increases in sea level, (river) flow and rainfall, the number of properties at risk of flooding could increase substantially, particularly for the more frequent flood events.” (Scottish Government, 2014).   Flooding brings with it the risk of contamination to PWSs from sewerage overspill (E.coli) and chemical and other run-off from saturated fields (clostridium perfringens, trace metals) for example (see Limitations below).

Against this backdrop, the Private Water Supplies (Scotland) Regulations 2006 place responsibilities for drinking water quality on a large network of stakeholders, involving the dissemination of advice and guidance and subsequent on-going monitoring and evaluation.

Currently, the Drinking Water Quality Regulator (DWQR) remains concerned that “Despite all of these activities [...] compliance with water quality standards, particularly E. coli, an indicator of faecal contamination, remains poor and the risk to health for consumers of these supplies remains of concern […].  Given the health risks that untreated or poorly treated water supplies can pose, not least of which is E.coli 0157 this level of compliance is unacceptable for Scotland, its residents, visitors and businesses”.  To gain a better understanding of the poor compliance with water quality standards the DWQR published its strategy for improvement in October 2014 (DWQR, 2014).  This focuses on the quality of drinking water supply and includes a 28-point action plan, a performance review of which is due in 2017.

While none of the actions in the action plan directly considers the exposure and vulnerability of private water supplies to increased risk associated with extreme weather events, the existence of the SEPA flood hazard maps does provide a foundation for including a climate risk assessment of PWSs in the Local Flood Risk Management Plans and the corresponding Local Delivery Plans which will be developed by Local Authorities in 2016 (see above).  Indeed, the work undertaken by MWH and SISTech on behalf of the DWQR built in an assumption of the need for private water supplies to be resilient to, amongst other things, “environmental factors (e.g. severe weather)” in their cost benefit analysis of the 2006 Regulations (DWQR, 2010).

The number of private water supplies in Scotland has decreased by around 4% since 2003 from 21,069 to 20,193 although the proportion of the population served by these supplies has almost doubled with over 3.5% of the Scottish population now reliant on this type of supply.[1]

The Private Water Supplies (Scotland) Regulations 2006 place a duty on local authorities to risk assess all Type A (non-domestic) supplies and to review these risk assessments annually. Additionally, local authorities must provide advice and assistance on risk assessments to those responsible for Type B (domestic) supplies on request. In 2013, 95% of Type A supplies had a ‘completed’ or ‘reviewed’ risk assessment, an improvement of six percentage points on the previous year.  Assessment of Type B supplies remains rather more problematic however since the Local Authority obligation is to provide advice and guidance only on request. Furthermore, the assessment does not include any consideration of the exposure of supplies to flooding or indeed any other extreme weather events that would have the potential to disrupt and/or contaminate supplies.

The Water Industry (Scotland) Act 2002 placed an obligation on the Drinking Water Quality Regulator to publish an annual report of their activities (Scottish Government, 2002).  Consequently, private water supply data has been available in the public domain from 2003.  Since the 2006 Regulations were introduced, the emphasis in these reports has been on the assessment of water quality (Scottish Government, 2006).  The Regulations place a duty on Local Authorities, in practice Environmental Health teams, to enforce PWS legislation. Local Authorities are required to provide the DWQR with an annual data return for PWSs in their areas. The Water Industry (Scotland) Act 2002 places a duty on the DWQR to supervise the enforcement of the drinking water quality duties that local authorities have responsibility to enforce.

The 2006 Regulations require monitoring of all Type A supplies to provide microbiological and organoleptic (taste and colour) quality of a supply.  In 2014, 6% (2,700) of the 44,812 Type A samples failed one or more monitoring checks. E. coli, for example, which has the potential to cause illness and provides an indication that faecal contamination of the supply has occurred, was detected in 13.4% of Type A private water supply samples taken across Scotland in 2014. This indicates that these supplies are either not receiving the appropriate amount of treatment before use, or that the existing treatment is not being satisfactorily managed and maintained (DWQR, 2015).The 2006 Regulations introduced new categories of private water supply: Type A and Type B, broadly commercial and domestic.  These are not directly comparable with the Type 1 and Type 2 categories used previously (see the discussion in the Metadata section below).

PWS data by source type is available from the DWQR annual reports http://dwqr.scot/information/annual-report/

Analysis of water quality at local authority scale is provided in the annual Local Authority Summary Tables, which have been published separately since 2013 (http://dwqr.scot/media/13816/dwqr-annual-report-2013-local-authority-tables.pdf )