SCCAP objectives:
S2: Increase the awareness of the impacts of climate change to enable people to adapt to future extreme weather events
S3: Support our health service and emergency responders to enable them to respond effectively to the increased pressures associated with a changing climate

1: Some customers sign up to receive both alerts and flood warnings, or to receive warnings from multiple areas

Since the early 1960s, average annual rainfall has increased by 27% across Scotland, varying considerably between regions and seasons.  Winter rainfall has increased most, especially in the North (51%) and West (45%) compared with the East (24%). A trend of increasing heavy rainfall in winter is also apparent; in particular, North and West Scotland have seen an increase of more than eight days.  The patterns of change are broadly similar to those for total precipitation with a strong east-west gradient in winter months. Most of the west has seen an increase of more than five days of heavy rainfall in winter. Changes in summer months are small but some northern areas have become drier.  For the year as a whole, most western parts of Scotland have become wetter while there has been much less of an increase in eastern parts (SNIFFER, 2014).

SEPA have identified the locations most at risk from flooding and developed enhanced coastal and river forecasting capabilities based on a network of monitoring stations. There are 269 of these Flood Warning Areas which can provide advance notice of flooding in these specific risk areas via the warning service: Floodline (SEPA, 2015).  As well as the more targeted flood warnings available to people in those localities, more general Flood Alerts are available which provide flood messages for a larger geographical area (19 in total).

The effectiveness of this service depends on uptake, i.e. the number of people signing up to receive flood warnings and alerts by phone. It is particularly important that the uptake is high in those areas at significant risk of flooding.  However, it should also be noted that, during flood events, far greater numbers access SEPA’s flood warning services and products digitally, via both SEPA’s own website and also partner information channels (e.g. Met Office, local authorities and the BBC). Therefore, consideration of Floodline registration figures alone does not fully reflect the number of people who utilise SEPA’s flood information services and who take preparatory action as a result.

As of June 2018, there were 27,224 individual users of Floodline services. This represents an increase of nearly 4,000 users since December 2015. The number of registrations for flood warnings in June 2018 was 17,929, and the number of registrations for more general flood alerts was 16,325. Whilst the total number of sign-ups to the service stands at 34,254 it should be noted that some users sign up for both warnings and alerts and a small number of users also sign up for warnings from multiple areas.

A report by CREW (Geddes et al, 2017) investigating the effectiveness of the Floodline service, found that 82% of those who received messages from the service reported taking preparation action in response (e.g. charging mobile phones, checking transport/ access issues, moving documents, vehicles, and/or livestock).

The likelihood of taking action in response to receiving Floodline messages was also found to be linked to previous experience of flood events, educational level and satisfaction with the Floodline service (Geddes et al, 2017).

In 2011, the introduction of the Floodline direct warning service in Scotland provided an active dissemination system for the public. Category 1 and Category 2 Responders also have access and are identified separately.  Uptake rose by 85% in the first four years to December 2015 (Figure 1). 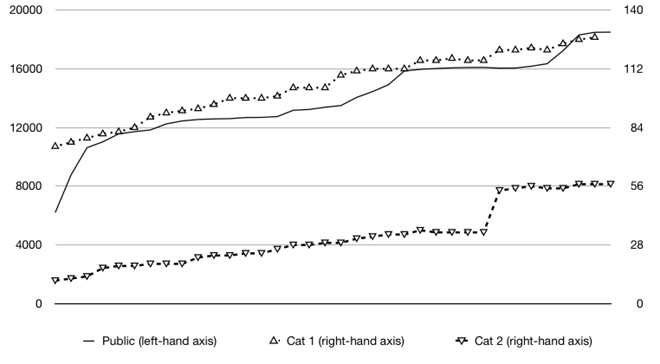 During Storm Desmond in December 2015, the Floodline website received over 100,000 user sessions (250,000 page views) exceeding the previous record of 95,000 in August 2014.  550 new people registered for the service. The water level web page alone was viewed over 100,000 times and 64 notifications of flooding were notified through ‘Report a Flood’, a feature added recently.  At the height of the event 15 Alerts and 75 Warnings had been issued (including 2 Severe, the first time since the launch of the system that this level of risk had been identified).  Over 70,000 messages were sent via a variety of channels (email, fax, pager, SMS and voice messages). 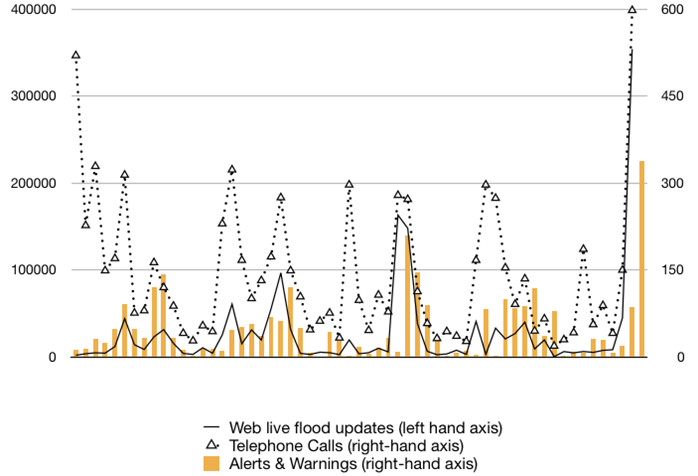 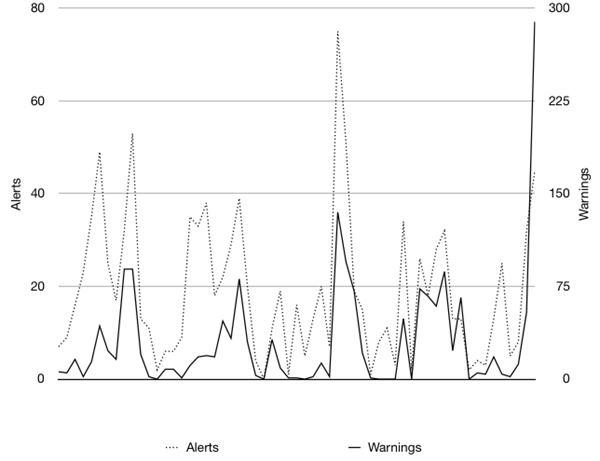 In February 2017 SEPA published their plans for the delivery of the flood warning service for the next five years (SEPA, 2017). The Framework is structured around three main aims:

As part of this aim, fourteen new flood warning schemes have been identified for operational delivery by 2021 (Figure 4)

Building on their partnership with the Met Office, SEPA aim to utilise new data sources to improve forecasting ability and communication of risk and uncertainty. It is intended that new hazard maps will enable more real time flood mapping which can support decision making during flood events

Aim 3- Engagement with partners and customers

In partnership with local authorities and Scottish Water, SEPA aim to increase flood risk awareness campaigns , with priority in areas with new and existing Flood Warning Areas. They also aim to widen their partnerships to include organisations already active at community level.

The Framework also includes key measures for the success of the service e.g: 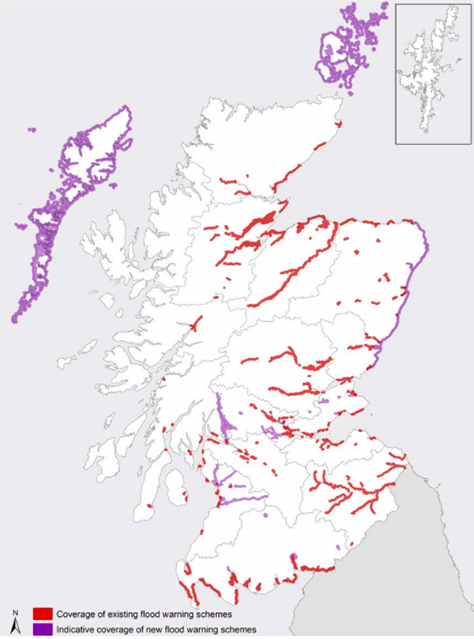 CREW’s report (Geddes et al, 2017) on the effectiveness of the Floodline service included a number of recommendations to improve the service in the future, including:

Uptake in Flood Warning Areas is particularly important, and of the registered users in December 2015, 16,673 were located within one of the 269 FWAs located in 15 Flood Alert Areas (FAAs)  (Table 1). However, this aggregated data conceals a wide range of uptake across the individual FWAs from 0% - no registrations in Hunters Grove (Argyll & Bute FAA) or Skelmorlie (Ayrshire & Arran FAA), for example - to 663% in the Shawlands, Langside and Cathcart FWA in the West Central FAA, as a result of changed boundaries.

In December 2015 it was estimated that 66,482 properties were at risk of flooding across all FAAs.  The number of registered users shown in Table 1 suggests around 25% (range 17% to 38%) of those properties were signed up for the service.  However, the data cannot be disaggregated to individual properties so this is likely to be an over-estimation.  Additionally, people following flooding alerts and warnings on social media (Twitter, Facebook, etc.) would not be included in the Floodline registration count.   These users are not tracked currently and therefore no data are available. 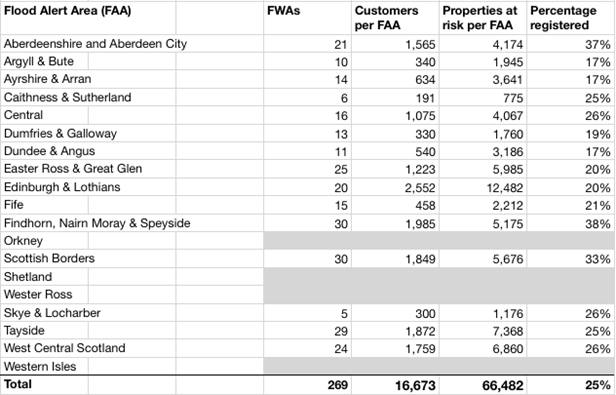 However, the FWA dataset and the baseline dataset have different purposes and have been created differently. The appraisal dataset is used by SEPA as the basis for the published figures of number of properties at risk, Annual Average Damages etc. The flood warning dataset is used specifically for flood warnings. Warning areas have been created based on historical flooding, detailed modelling where this is available and, originally, the old indicative flood map (IFM). An exercise is being undertaken to update the warning areas to take account of the hazard mapping rather than the IFM. The baseline dataset comes from strategic level modelling and mapping.

Ad hoc data extracts, the most recent being June 2018.