SCCAP objectives:
B2: Provide the knowledge, skills and tools to manage climate change impacts on buildings and infrastructure
S1: Understand the effects of climate change and their impacts on people, homes and communities
S2: Increase the awareness of the impacts of climate change to enable people to adapt to future extreme weather events
S3: Support our health services and emergency responders to enable them to respond effectively to the increased pressures associated with a changing climate

[1] Currently the incident recording system does not clearly attribute flooding to weather events as opposed to other sources, and assistance at a flood event may be recorded under another category (Rescue or Evacuation from Water)

Different types of flooding – pluvial, fluvial and coastal – have different impacts at different scales on society.  The flooding of dwellings has physical and psychological impacts on the people who live there; the flooding of schools has a wider impact on communities and the local economy due to secondary effects such as parents’ unplanned absence from work to look after their children. The flooding of emergency services facilities – fire, police and ambulance stations – and critical national infrastructure (CNI) – water treatment works, electricity generating facilities – has the potential to disrupt entire regions.

Climate Change projections indicate an increase in precipitation and heavy rainfall events across all regions of Scotland over the course of this century. Recognising that the strategic planning cycle for Category 1 Responders is typically 10 years in advance, a better understanding of the patterns of actual flooding enables more accurate flood modelling and investment in adaptive capacity to be targeted appropriately.

Statistics are presented for the three operating regions: North, West and East.  The Local Authorities in each of these regions are catalogued in the Methodology section.

CRS12: Number of community services at significant risk of flooding

Scottish Fire and Rescue Service recorded 1,367 flooding related events[1] in 2014-15 (Table 1). However, attribution of flooding due to weather events is problematic as a result of the way that the data are captured - see Methodology.  As a consequence, of these 1,367 flooding events only 606 (44%) are considered to be ‘relevant’ to a weather related event, using the criteria outlined in the methodology for widespread flooding, and of these only 42 events (7%) are almost certainly so (Table 2).

The Scottish Fire & Rescue Service (SFRS) is a unitary force.  It operates across 3 Service Delivery Areas: North, East and West.  The majority (53%) of all flooding events during this period occurred in the West; a quarter (25%) in the North and just over a fifth (22%) in the East (Table 1). However, weather related flooding events had a more significant impact in the North (Table 2).

The majority (64%) of these events resulted in household flooding which affected just over 7 people in every 100,000 of the population (Table 3).  Critical National Infrastructure (CNI)[2] (Scottish Government, 2011) and Emergency Services were relatively unaffected with 2 utilities (sewage and water works) and 2 fire stations flooded in 2014-15.  Flooding events in health facilities were primarily on individual hospital wards.

Of the 3,308 events that can be said to be ‘weather relevant’, 3 affected public institutions and 13 affected Utilities (CNI) in Scotland in the period 2009 - 15. There was a significant impact on facilities associated with education (65 events), health (108 events) and emergency services (21 events).

The majority (39%) of weather related flood events were in the North area (1,283 events) with the West and East showing similar numbers of events (938 and 954 respectively).  In each of the three regions over half of all events resulted in flooding to dwellings (Table 5). 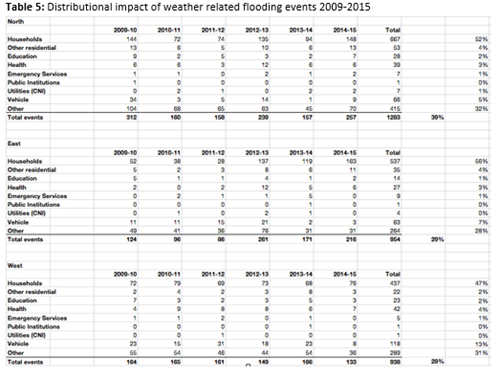 An increase in winter precipitation is projected across all regions for all emissions scenarios.  It is very unlikely that winter precipitation would increase by more than 55%, but very likely it will be greater than 12%, under the High emissions scenario (A1F1) in the West in the third reference period centered around 2080.  A 6% to 30% range is projected even under the Low emissions scenario (B1) (UKCP09, 2009).  Each of these scenarios will increase the incidence of flood events in the future and will need to be considered by SFRS in their next round of strategic planning, given the 10 year lead time to implementation.

Data related to other extreme weather events – extreme heat, extreme cold, storms and high winds - are unavailable.  This makes any consideration of capability and capacity

[1] Although legacy Scottish fire services were replaced by SFRS in April 2013 the manner in which each legacy service still complete IRS reports remains the same therefore there are inconsistencies in the way incidents are recorded in the old ‘Strathclyde’ area as opposed to the rest of Scotland. 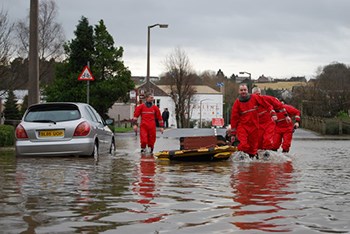