Narratives: Extreme weather and infrastructure, Resilience and resource use

SCCAP objectives:
B2: Provide the knowledge, skills and tools to manage climate change impacts on buildings and infrastructure
N2: Support a healthy and diverse natural environment with the capacity to adapt

Per capita consumption: 153 litres per person per day.

No clear trend in total household water use.

Although Scotland is a relatively water rich country, there are not unlimited resources available for treatment and supply. The combined effect of climate change and the growing worldwide population may increase the pressure on available global water resources (Scottish Water, 2012). Possible climate impacts include changes in the quality and availability of water resources, increased variability in rainfall patterns, and restrictions on discharging wastewater back to the environment (Scottish Water, 2013).

Ensuring that the available resources are used in a sustainable way is critical to Scotland’s future prosperity (Scottish Water, 2012). Reducing water demand is important in order to reduce the risk of loss of supply to customers and meet future demand requirements. By monitoring both household and non-household (BW9) water usage it is possible to assess changes in societal water demand. This indicator specifically examines household water usage, and provides a measure of the effectiveness of the strategies employed to increase efficiency of water used by households.

Over the last few years Scottish Water has undertaken a campaign to educate its household customers about measures they can take to preserve water resources. This has been achieved through customer information communications, on-line promotions, and partnerships with local authorities. They are also assessing the relative costs, effectiveness, and sustainability of different measures that may reduce household water consumption, in order to inform policy in Scotland (Scottish Water, 2012). Activities include a water efficiency trial to understand how household customers use water and what motivates them to engage in water efficient behaviours. Data collection for the trial has been ongoing since 2015/16, with early findings indicating that a combination of physical interventions to properties and customer education can potentially achieve modest reductions in water use. Learning gained from the trial has enabled the development of a plan to issue water efficiency advice packs to 49,000 households in areas susceptible to supply shortages (Scottish Water, 2017a).

Scottish Water is a member of Water Industry Research (UKWIR), and works to promote and adopt that body’s best practice guidance, together with best practices in agreement with the Water Industry Commission for Scotland (WICS) appointed Leakage Reporter (Walton, 2018).

Water consumption statistics are calculated each year between the 1st April and the 31st March. Table 1 shows the yearly figure for household water consumption from the 2008/9 period to 2017/18. As only a very small number of households in Scotland have water meters, consumption is monitored on an area basis.  Thus the first column in Table 1 (‘Water Volume used by un-metered households’) covers nearly all households and is calculated using data reported from Scottish Water’s Continuous Area Per Household Consumption (PHC) Monitor.

The second column (‘Water Volume used by metered households’) reflects the consumption recorded by the very few households that have water meters (circa 400-500), plus an element for meter under registration. The third column shows the total volume across un-metered and metered households. 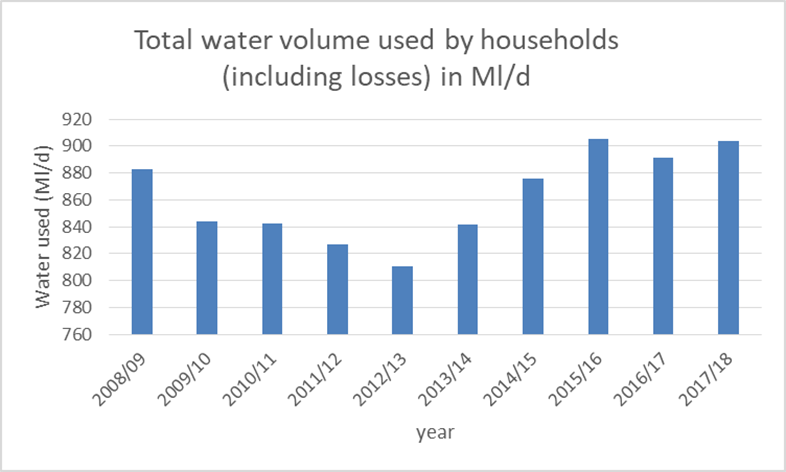 Note: Vertical axis is not scaled to zero 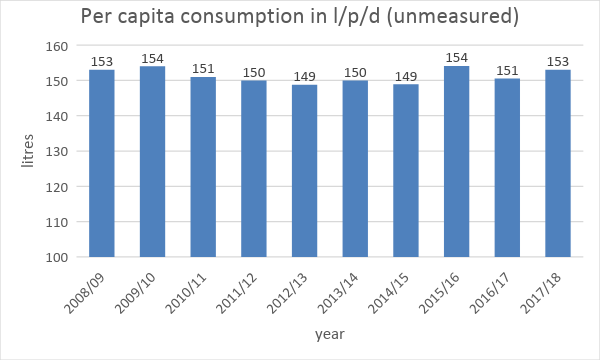 Note: Due to the very small number of metered domestic properties (around 400-500, with 2.5m unmeasured), per capita consumption data presented is based on unmeasured households only. Vertical axis is not scaled to zero.

By 2035 the Scottish population is expected to grow by 10%, primarily due to the net inward migration from Europe, placing additional demands on the water supply. In addition, the number of households is expected to grow by 21%, although the average household occupancy rate will reduce from 2.18 to 1.93. In addition, climate change may result in alterations to the availability or quality of water sources (Scottish Water, 2013), which could impact on future water supplies.

If Scotland’s population grows in some of the eastern areas of Scotland where rainfall is expected to decrease, the extra demand on water resources may cause some environmental pressures.   However, Scottish Water is implementing water efficiency measures, which may help to reduce the increase in demand.

The slight increase in per capita consumption from 2015/16 reflects Scottish Water’s investment into state of the art flow meters, pressure monitoring devices and data loggers that enable more frequent collection of flow and pressure data, helping more accurate quantification of domestic water consumed (Walton, 2018). This suggests that the apparent slight increase in consumption in the last 3 years may result from more accurate measurement rather than an actual change.

The number of metered properties is fairly small (just 440 in 2017/18), and is not constant, therefore figures relating to this group may be misleading.  The volume of metered water delivered decreased by 0.06Ml/d between 2008/9 and 2012/13 period, which may simply be related to a reduction in the number of measured households.

Reported per capita consumption over the period may also be influenced by changes in the socio-demographic data used to stratify the customer property base, changes in property vacancy levels reported by Local Authorities, changes in the reported numbers of properties connected to the network and variations in the weather year to year (Walton, 2018).

Customer demand may vary from year to year due to weather conditions. For example, household consumption reduced in 2016/17, compared to the previous year. Scottish Water attributed this in part to the cool summer with above average rainfall reducing demand (Scottish Water, 2017b). The weather can also have a significant effect on levels of leakage (ibid).

Data covers households supplied from the water mains only, and does not cover households that use private water supplies.

Domestic water usage will be affected by lifestyle – for example it is likely to be less for people who go out to work, or who spend substantial time away from home, and more for those who spend the majority of their time at home.