Narratives: Extreme weather and infrastructure, Resilience and resource use

SCCAP objectives:
N2: Support a healthy and diverse natural environment with capacity to adapt
B2: Provide the knowledge, skills and tools to manage climate change impacts on buildings and infrastructure

Although Scotland is a relatively water rich country, there are not unlimited resources for treatment and supply (Scottish Water, 2012). It is predicted that climate change and population growth will place increased pressure on Scotland’s water system, and on the available resources (Scottish Water, 2014). This may increase the likelihood of a long term interruption to customers’ water supply. Interruptions are typically caused by extreme adverse weather conditions or when a strategic part of the water supply system is disabled due to failure, or external impacts such as malicious activity or other unexpected events (Scottish Water, 2014). However, long-term changes in weather patterns, as predicted to occur with climate change, may also impact on water availability.

Year-by-year forecasts of water demand from customers (average and peak daily use), and the available volumes of water for supply, are used to inform water resource planning (Scottish Water, 2015b).  Zones are used by Scottish Water to identify areas of supply to customers.

The Supply Demand Balance (SDB) used in this indicator gives a summary of the surplus / deficit position for each zone, based on the surplus / deficit position during the critical period for each zone. Zones with large storage have a critical period based on annual averages; while for smaller sources the critical period will be ‘peak week’.  Further details of this calculation are included in the methodology section. Monitoring the SDB is important because it provides a measure of the vulnerability of the water supply under climate change.

There are currently 196 water resource ‘zones’ (Scottish Water, 2014). Supply is limited by the raw water volume (yield) from water sources, the permissible abstraction limits (abstraction licence), and the physical asset base (water treatment works (WTW) capacity and raw water transfer infrastructure). The yearly forecasts are then examined to assess if there is a potential supply surplus (enough water) or deficit (not enough water). An individual water resource zone relies on the same resources, thus all customers within a zone share the same level of service (dictated by the water balance for that individual zone) and the same risk of supply failure. Where a supply deficit is forecast, this can be addressed by: managing leakage at the economic level (including offsetting alternative supply-side investment), improving the way in which water is distributed to customers and between zones, improving the way water is treated, increasing the supplies of water available and helping customers to reduce their demand for water (Scottish Water 2015b).

ince 2003, Scottish Water has identified four occasions during which there has been a risk of significant loss of supply due to low rainfall. Each time, customers were asked to use water wisely, while Scottish Water took steps to augment supplies and / or reduce leakage. The events were:

These events demonstrate that the water supply is vulnerable to unexpected events, failure of critical assets or extreme events, which could result in supply interruptions (Scottish Water, 2014).

Scottish Water produce figures on the SDB during a critical period in each data zone on a yearly basis, allowing them to identify zones that record a deficit during this period. Table 1 summarises data for SDB for the period 2007/2008 to 2013/2014 (2007/2008 is the earliest date from which Scottish Water could supply consistent data). The table shows that the number of zones in deficit has fallen over the period and the mean deficit across the zones has also decreased. The number of customers served by zones in deficit has fluctuated over the seven years, but over the last 4 years there has been a marked decline, with numbers falling from over 1.6 million in 2010/2011 to less than 300,000 in 2013/2014. 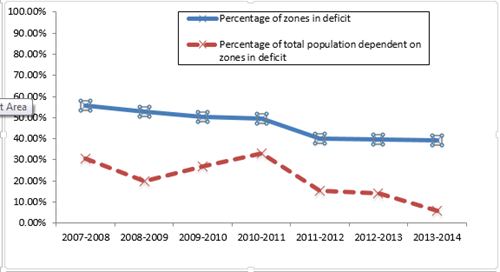 Climate change and population growth will place increased pressure on the water system, and on available resources. Scottish Water estimate that there will be 113,000 new properties connected to the system across 2015-2021, which will increase overall water demand. In addition, climate change is expected to increase the variability of rainfall patterns across Scotland, which will impact on water availability (Scottish Water, 2015b). Scottish Water recently completed a vulnerability assessment of future water availability for 2040.  This assessment applied Met Office climate change projections to 11 equally probable climate change scenarios.  The outcome suggested a range from ‘little impact’ to up to 45% of customers being affected to some degree, suggesting the possibility of more frequent water shortages for some customers (Scottish Water, 2015b).

Scottish Water’s 25 year water resource plan (Scottish Water 2015b) and SR15 business plan (Scottish Water, 2014) include actions to help manage the supply of water in a sustainable way and to help maintain quality. For example, Scottish Water is engaged in sustainable land management activities to help manage catchment run-off and the impact on raw water resources, and will also work with farmers and landowners to prevent pollution. They also plan further investment in water resources for the next regulatory period (SR15) and have committed to improving the availability of drinking water.  £24m will be spent on improving the Security of Supply Index (SOSI) for 47,000 customers during periods of dry weather. This is part of a larger plan for investment which includes £54.8m to improve resilience of supplies to extreme events (Scottish Water, 2014).

To support this process, a Resilience of Supply Index (RoSI) will be developed over the next few years in order to provide a measure of the overall resilience of supply for customers, taking account of all the wider resilience risks associated with a loss of supply from source to tap (e.g. flooding, physical security, critical asset failures) (Scottish Water, 2014; 2015).

Furthermore, Scottish Water has used a different mechanism to determine zones at risk under climate change, looking at risk in the longer term, and from this has identified 53 zones at risk of supply deficit. These 53 zones are not at immediate risk and include some that are currently in surplus (Scottish Water, 2014). The zones were determined based on a Scottish Water risk assessment and the application of climate change projections, focusing on zones that are vulnerable because the availability of the water source/resource may be at risk, for example where the source is a smaller river. This means that across the next Scottish Water investment period (2015-2021), these ‘at risk’ zones will be subject to full hydrological modelling with the 11 future climate change scenarios. This will establish future ‘yield’ data projections and will show where deficiencies (due to climate change) might be. This determination is done only periodically, and is not comparable with ‘zones at deficit’ as defined by SDB or SOSI. Scottish Water already has plans to make improvements to 11 of the zones identified as at risk using this measure. These water supply zones are located in the Highlands and Islands of Scotland.

Both the number of zones in deficit, and the number of customers served by these zones has fallen between 2007/2008 and 2013/2014. Scottish Water attributes these improvements to two main factors. Firstly, their programme of investment in improving water resources, which impacts on the Supply side of the SDB, and secondly, leakage reduction to the economic level which has made large improvements to the Demand side of the SDB.

This indicator was compiled by Professor Lynne Jack and colleagues at Heriot Watt University.

The number of zones in deficit is based on the supply demand balance (SDB) data spreadsheet supplied by Scottish Water, contact Owen Bramwell. 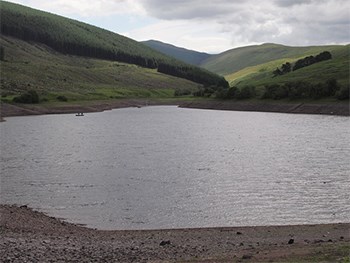