SCCAP objectives:
B2: Provide the knowledge, skills and tools to manage climate change impacts on buildings and infrastructure
N2: Support a healthy and diverse natural environment with the capacity to adapt

Although Scotland is a relatively water rich country, there are not unlimited resources available for treatment and supply. The combined effect of climate change and the growing population may increase pressures on available water resources (Scottish Water, 2012). Possible climate impacts include changes in the quality and availability of water resources, increased variability in rainfall patterns, and restrictions on discharging wastewater to the environment (Scottish Water, 2013).

Scottish Water maintains over 48,000 km of water pipes, and, ahead of target, successfully reduced leakage to the Economic Level of Leakage (ELL) – the point where the cost of reducing leakage becomes greater than the savings from reduced water production (Scottish Water, 2012). Teams not only respond to reported bursts but also actively detect and fix leaks underground (Active Leakage Control). They also make increased use of innovative technology, and are investing in pressure regulation with the aim of reducing the likelihood that bursts will impact on customers (Scottish Water, 2014b). In the 2016-2017 reporting period, leakage was 494.76 megalitres per day. This is 4.87 megalitres per day less than in the previous reporting period.

The leakage statistics are calculated for a single year between the 1st of April and 31st of March. Table 1 shows the total leakage in Ml/d following ‘Maximum Likelihood Estimate adjustment’ (see methodology section for details).  The ‘Maximum Likelihood Estimation’ (MLE) leakage assessment was introduced in 2008/09, and was made possible due to improved District Metered Area (DMA) coverage/operability and an acceptable Top-down / Bottom-up reconciliation range within the Water Balance (Scottish Water, 2009).  There are pre-2008 figures available but changes in measurement and reporting make 2008 a reliable baseline.
Figure 1 and Table 1 show that leakage losses have decreased each year. In 2016/17, the volume of water lost had fallen by more than 320 megalitres (39.4 %) compared to 2008/09. 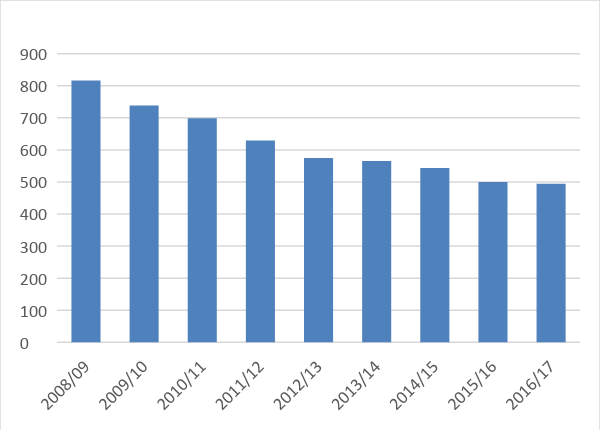 Climate change may change the availability and quality of water sources (Scottish Water, 2013), which could impact on future water supplies. Scottish Water is committed to leakage management, and as part of their 2015-2021 Business Plan they propose to reduce the time taken to respond to visible leakage from 3 days to just one In setting price limits, the Water Industry Commission for Scotland (WICS) included a £40m capital maintenance allowance to allow sustained investment in leakage assets and some further “exceptional item” investment to facilitate progress towards the ELL.

Leakage has reduced consistently since the targeted leakage reduction programme was initiated at Scottish Water in 2006 (Scottish Water, 2013). This programme should allow them to maintain, and potentially continue to improve, the economic level of leakage (ELL).

The figures show a yearly reduction in water leakage. In 2016/17, actual leakage was 495 million litres per day, significantly below the minimum service level (575 Ml/d), and below 500 Ml/d, the level achieved in the previous year and the target level for the end of the 2015-2021 regulatory control period (Water Industry Commission for Scotland 2017).

No comparable data is available prior to 2008.

This indicator was compiled by Professor Lynne Jack and colleagues at Heriot Watt University with input from Scottish Water.  The information was extracted from publicly available data compiled by Scottish Water for The Water Commission in Scotland.

This indicator was updated in 2018 by Ruth Monfries (Royal Botanic Garden Edinburgh/CXC). 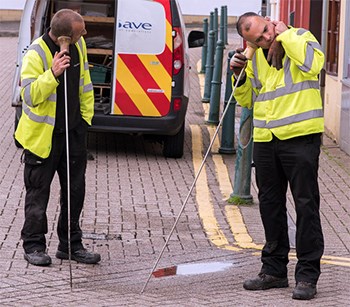