BT9 Disruption risk to railway services as a result of flooding

Transport supports many social and economic functions. In 2013/14, 86.3 million passenger journeys were made by rail in Scotland which represents 16% of all public transport journeys.  Rail patronage has increased by 35% since 2004/05 and constitutes a growing share of public transport journeys.  In contrast, there has been a decline of 8.2% in the amount of freight (tonnes) lifted by rail between 2002/03 and 2012/13.  The modal share of freight (in tonne-km) carried by rail in Scotland in 2010 was 7% (Transport Scotland, 2014).

Flooding of rail infrastructure can cause disruption to rail transport with knock-on consequences for these functions – e.g. preventing or delaying people from accessing employment, delaying rail freight etc. Climate change predictions suggest that flooding of rail infrastructure will become more extensive and more frequent. This indicator will provide insight into any changes in such disruption.

Note that BT9 metrics measure the length of rail at direct flood risk (for a 1:200 year flood), for each of high, medium and low rail traffic volumes.  It was not possible during the course of this project to obtain data that would show the length of rail routes that would be affected by one or more directly flooded sites.  It may be possible to address this in the future if additional resources are made available.  For example, if the Edinburgh – Glasgow line is flooded then a useful representation of the issue could include one or both of the following:

Table 1 shows current figures for expected levels of service disruption from flooding.  These are based on the amount of rail traffic carried through a section at flood risk (of a 1:200 year flood event).  Thus severe disruption corresponds to a rail section with a high level of rail traffic that is affected by one or more flooded sites, moderate disruption to a flood site on a line with medium traffic load, and so on. The figures represent the proportion (by length) of the rail network that would experience disruption should flooding take place.

For all three sources of flooding assessed, the potential for disruption to railway services appears to be low as the majority of the rail network exposed to flood hazard serves low volumes of rail traffic. This also means that overall flood risk to the network is lower as well (where flood risk is assessed as a function of the likelihood and consequences of an event). 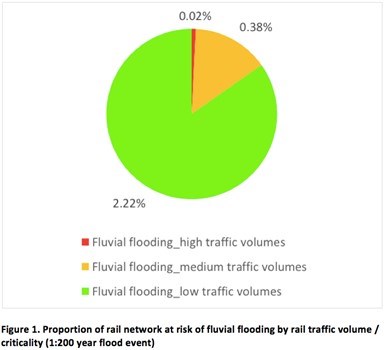 The location of flood risks to the rail network for severe and moderate levels of flooding are shown on Figure 2. 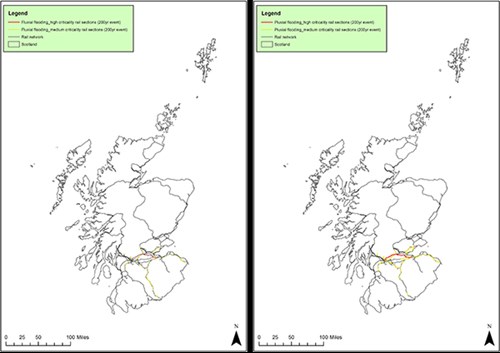 Sections of the rail network that carry high and medium rail traffic volumes are focussed around the central belt of Scotland (e.g. the Glasgow to Edinburgh via Falkirk line; the various Glasgow and Edinburgh commuter lines), reflecting the densely populated nature of the region and the associated high demand for transport. The East and West Coast Mainlines also carry medium levels of rail traffic and are therefore exposed to moderate levels of disruption from flooding (though this assessment doesn’t account for the strategic importance of these lines or the number of passengers using these services which may be higher due to the use of higher capacity trains). This is indicated in Figure 2. Areas of pluvial and fluvial flood risk are spread around the region reflecting the spatial distribution of watercourses and their catchments (fluvial flood risk) and impermeable features or sites with poor surface water drainage provision (pluvial flood risk).

Historic flood hazard and rail traffic volume data are not available. However, historic climate data shows how rainfall has changed leading to impacts on biophysical systems (e.g. hydrological response of Scotland’s catchments and watercourses) and ultimately changes to the scale and magnitude of the  risk of rail network flooding. Overall there is a clear upward trend in winter precipitation as well as increasing heavy rainfall in winter (Sniffer, 2014). It is likely that these climatic changes will have led to increased frequency and extent of pluvial and fluvial source flooding[1].  It is not possible to show how the risk of rail traffic disruption due to flooding has changed without access to historic data on disruption of railway services. Rail service patterns will be driven in part by demand which is subject to change over time due to various drivers (e.g. population distribution, other demographic factors, distribution and type of economic activity, and so on).

The UK Climate Change Risk Assessment (HR Wallingford et al, 2012a; Thornes et al, 2012) assessed changes in flood risk to rail infrastructure as a result of anticipated climate changes. Whilst this assessment was only undertaken for England and Wales (due to data availability) it provides a broad indication of what might happen in Scotland in the future given anticipated climate changes. As such, transport specific aspects from the UK CCRA can be used in conjunction with general aspects from the Scotland CCRA (HR Wallingford et al, 2012b) to understand how flooding related impacts to rail infrastructure might change in the future.[1]

In terms of potential future flooding related climate risks to rail infrastructure, the results of the CCRA for England and Wales indicated that the projected length of railway at significant likelihood of flooding (where significant is defined as a 1.3% annual probability) would be between 2,000km and 2,600km by 2020 compared with a baseline of about 2,000km (Thornes et al, 2012). This equates to a possible increase of between 0% and 30% with the range reflecting the different climate change (emissions) scenarios considered in the assessment. The CCRA also highlighted how in addition to an increase in the overall length of infrastructure that could be affected, the frequency of flooding of infrastructure that is already located in the floodplain is expected to increase (ibid). These projections do not account for any actions that could be taken to alleviate flood risk to railways (e.g. flood defence infrastructure, enhanced maintenance regimes, etc) which may help to reduce overall flood risk (see indicator BT16). Whilst these projections are focussed on England and Wales (and therefore the specific regional climate projections and rail network issues and configuration therein), they provide a useful proxy of what may happen in Scotland.

In summary the following projected changes are anticipated in future:

The assessment above does not account for possible future changes in rail service patterns (e.g. frequency, number, location) which would affect the degree to which the rail network is exposed to flooding related disruption. It has not been possible to collate data on current and future rail service plans so possible future flooding related climate risks to the rail network, as a function of changing patterns of service delivery, have not been assessed.

[1] Indicator BT2 provides a more detailed description of the assessment in terms of climate projections and associated impacts on biophysical systems (the precursor of risks and impacts to socio-economic systems).

There are several key limitations to the assessment as summarised below: