Flooding can disrupt the operation of the road network with knock-on consequences for many social and economic functions – e.g. delaying deliveries, preventing or delaying people from accessing employment or disrupting vital healthcare services.  Communities located in remote areas are particularly vulnerable to road network disruption as they rely more heavily on road transport than those living and working in other parts of Scotland and alternative routes (where these exist) often require long diversions.

This indicator uses standardised trunk road incident data as reported by Scotland’s trunk road Operating Companies (OCs) to assess flood events affecting the road network.  The data is managed centrally by Transport Scotland through the Integrated Road Information System (IRIS). As explained further in the limitations section below, IRIS has only been fully operational since August 2014 meaning that the data presented in this section is incomplete (i.e. there are likely to be more flooding incidents than are reported here).

BT17 Risk of traffic disruption as a result of flooding

Table 1 presents current figures for each of the four metrics assessed for this indicator for the period January 2014 – March 2015. The location of all recorded trunk road flooding incidents during this period is shown in Figure 1.

Potentially Vulnerable Areas (PVAs), as identified in the National Flood Risk Assessment (SEPA, 2011), are locations where flood hazards could affect multiple receptors and therefore where the consequences of flooding are likely to be high[1]. Flooding events on transport links within such areas are likely to have important knock-on consequences for other socio-economic systems.  In this respect it should be noted that just under half (48.7%) of the trunk road network itself is located within the PVAs, and that just over half (51.68%) of the trunk road flooding incidents recorded were located within PVAs.  The spatial distribution of PVAs and trunk road flooding incidents within the PVAs is shown in Figure 1. 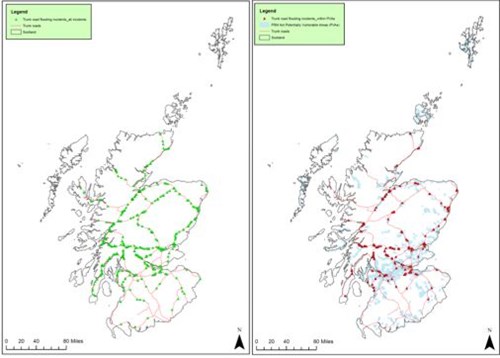 Figure 1. Location of all recorded trunk road flooding incidents (LH map) and all of those located within Potentially Vulnerable Areas (RH map) between January 2014 and March 2015 (IRIS, SEPA (2011)).

In terms of the severity of impact, only 1.41% of trunk road flooding incidents resulted in full road closure. The location of these incidents is shown in Figure 2.

Flooding of over 3cm depth provides another proxy assessment of flood incident severity (see Appendix 1, Table 4 Indicator Methodology below). 16.75% of trunk road flooding incidents recorded during the period assessed were incidents where flood depth was over 3cm. The location of these incidents is also shown on Figure 2.

To put these metrics in context, Table 2 summarises the number of different types of reported trunk road incidents and the proportion of incidents which resulted in a road closure.  Flooding was the fourth most common type of incident overall and occurred more frequently than other incident types directly associated with climate change risk, namely high winds, landslides and severe weather.  Also, the number of flooding incidents resulting in a complete road closure occurred more frequently but with the same order of magnitude as road closures associated with other potential climate change risks, i.e. high winds, landslides and severe weather. 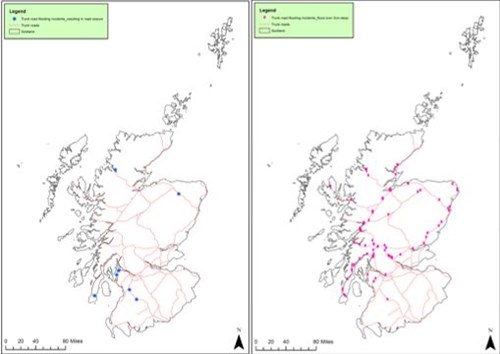 Note: Incidents have been listed in order of frequency of occurrence, highest to lowest.

[1] According to the approach taken by NFRA, trunk roads were regarded as high value receptors and hence the presence of a trunk road increases the likelihood of an area being designated a PVA

Historic flooding incident data is not available prior January 2014 to assess these metrics over time (i.e. to determine any trends in flood events affecting the trunk road network). However historic climate data shows how key aspects of climate (rainfall) have changed leading to impacts on biophysical systems (e.g. hydrological response of Scotland’s catchments and watercourses) and ultimately changes to the scale and magnitude of relevant climate risks (i.e. risk of traffic disruption as a result of flooding). Overall there is a clear upward trend in winter precipitation as well as increasing heavy rainfall in winter (Sniffer, 2014). It is expected that these climatic changes will have contributed to increased frequency and extent of pluvial and fluvial source flooding and associated impacts on the trunk road network.[1]

[1] A fuller account of historic climate trends is provided in indicator BT2.

The UK Climate Change Risk Assessment (HR Wallingford et al, 2012a; Thornes et al, 2012) assessed changes in flood risk to road infrastructure as a result of anticipated climate changes. Whilst this assessment was only undertaken for England and Wales (due to data availability) it provides a broad indication of what might happen in Scotland in the future given anticipated climate changes. Given this, transport specific aspects from the UK CCRA can be used in conjunction with general aspects from the Scotland CCRA (HR Wallingford et al, 2012b) to understand how flooding related impacts to road infrastructure might change in the future.[1]

The following projected changes are anticipated for the future:

The last two projected changes are of particular relevance. Any increase in the frequency of flood events affecting the road network (fluvial, pluvial or coastal) may also increase the number of flooding related incidents on the trunk road network recorded and managed by the OCs. Crucially, any flooding incident recorded by the OCs (with the exception of minor incidents perhaps) is likely to be of a severity such that it causes significant traffic disruption (Transport Scotland, undated). In summary therefore, anticipated climate changes are likely to increase the number of flooding incidents on the trunk road network and increase traffic disruption ( though note that this does not account for any action that might be taken, such as increasing drainage capacity).

[1] Indicator BT2 provides a detailed description of the assessment undertaken.

The limitations to the assessment of this indicator are summarised below:

ClimateXChange (2016) Adaptation to Climate Change: Context and Overview for Transport Infrastructure Indicators. Available online at Our Indicators and trends pages

Data not available online (request only),