BT17 Risk of traffic disruption as a result of flooding

Risk/opportunity:(from the Climate Change Risk Assessment for Scotland 2012):
FL8a Roads at significant risk of flooding TR1 Disruption of road traffic due to flooding

Narratives: Flooding and infrastructure, Resilience and resource use

Current headline figures for the trunk road network are listed below :

This risk-based indicator is designed to enable the potential for traffic disruption as a result of flooding to be tracked over time.

Flooding can disrupt the operation of the road network with knock-on consequences for many social and economic functions – e.g. delaying deliveries, preventing or delaying people from accessing employment, disrupting vital healthcare services etc.

This indicator provides a proxy assessment of the risk of traffic disruption as a result of flooding on the trunk road network. The assessment uses average daily traffic volume thresholds to define the criticality of the road section so that road sections serving higher traffic volumes are considered to be more critical and therefore at risk of higher levels of traffic disruption , given the same probability of flood event occurrence (i.e. where risk is a function of event likelihood and consequence). This assessment defines three levels of traffic volume criticality (high, medium and low) and then determines the proportion of the trunk road network at risk of flooding which falls within each criticality level.

Table 1 below shows the proportion of the trunk road network at risk of flooding (fluvial, pluvial and coastal) within each criticality level threshold[1].

The proportion of the trunk road network that can be considered high risk in terms of the traffic disruption related consequences of pluvial and coastal flooding is 0.9% and 0.06% respectively

Table 1. Proportion of trunk road network at risk of flooding for different levels of traffic disruption (1 in 200 year event)

Geographically, sections of the trunk road network that are at ‘high risk’ of traffic disruption due to flooding (all sources) are focussed around the central belt of Scotland (M8, M73, M74, M77, M80, M9 and M90), reflecting the densely populated nature of the region and the associated high demand for transport. See Figure 1 below. Areas of pluvial and fluvial flood risk are across the region reflecting the spatial distribution of watercourses and their catchments (fluvial flood risk) and roads and other less permeable features (pluvial flood risk). There are two key areas at risk of high levels of traffic disruption due to coastal flooding where trunk road routes coincide with the Firth of Clyde and the Firth of Forth and areas of high traffic demand (M8 east of Langbank and the M9 south of Bridge of Allan). 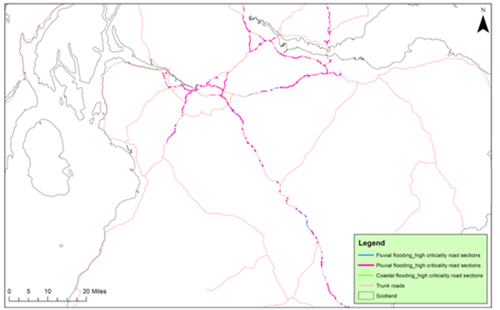 Note: Sections of the trunk road network at risk of fluvial and pluvial source flooding are coincidental in some instances. Where this is the case the fluvial source flood risk (blue lines) may not show up on the map above.

[1] This assessment mirrors the assessment in BT2 Risk of road closures from flooding – in that the combined flood risk by source across all criticality thresholds in this is equal to relevant trunk road outputs from BT2.

Historic flood hazard and traffic volume data is not available to assess BT17 metrics in earlier years. However, past climate data shows how key aspects of climate (such as rainfall) have changed. Overall there is a clear upward trend in winter precipitation as well as increasing heavy rainfall in winter (Sniffer, 2014). It is likely that these climatic changes will have led to increased frequency and extent of pluvial and fluvial source flooding. In the context of BT17 however it is not possible to understand how the risk of traffic disruption as a result of flooding has changed without access to historic traffic volume (i.e. road criticality) data. Trends in traffic volume are influenced by a range of transport supply and demand factors such as extent and condition of the trunk road network, demographics, population distribution and economic factors.

The UK Climate Change Risk Assessment (HR Wallingford et al, 2012a; Thornes et al, 2012) assessed changes in flood risk to road infrastructure as a result of anticipated climate changes. Whilst this assessment was only undertaken for England and Wales (due to data availability) it provides a broad indication of what might happen in Scotland in the future given anticipated climate changes. Given this, transport specific aspects from the UK CCRA (ibid) can be used in conjunction with general aspects from the Scotland CCRA (HR Wallingford et al, 2012b) to understand how flood risk to road infrastructure might change in the future. BT2 provides a detailed description of the assessment undertaken. In summary however the following projected changes are anticipated to take place in the future:

In relation to this indicator, the first projected change is of particular relevance. If the proportion of the road network located in areas exposed to flood hazards increases, additional road sections with potentially different traffic volume patterns would be exposed also. This would increase the overall exposure of the trunk road network.  It may also be the case that the proportion of high, medium and low risk changes also.

Furthermore, changes in transport system supply and demand could also influence future disruption. Structural changes in population (e.g. a higher proportion of elderly people), population size and distribution, and wider economic factors will all affect transport demand. Changes in the transport system (e.g. new roads, road enhancements) will affect supply. All of these factors have the potential to influence traffic volumes and the spatial distribution of high, medium and low traffic volumes (criticality) and thus risk. It has not been possible to assess the potential influence of transport system supply and demand on future risks though the transport infrastructure overview document provides a summary of trends for key contextual indicators.

Given the nature of the data used to compute these metrics it is not possible to compare either the likelihood or the potential consequences of flood events to other types of disruptive event (such as road traffic collisions or other extreme weather events). Indicator BT4 Flood events affecting the road network supports the comparison of the frequency of flood events on the trunk road network to other types of incident.

There are several key limitations to the assessment of this indicator as summarised below:

Due to resource constraints, assessment was only undertaken for 0.5% probability (1:200 year) modelled flood events.  These are low probability events and are located at the more severe end of the flood event spectrum.  Higher probability events (e.g. 1:10, 1:50) can be expected to affect a smaller extent of the network than 1:200 year events but on a more frequent basis.  It should also be noted that the flood hazard modelling is based on historic data.  As a result of climate change, the magnitude of a 1:200 year event may be greater than represented in this analysis.

ClimateXChange (2016) Adaptation to Climate Change: Context and Overview for Transport Infrastructure Indicators. Available online at our Indicators and trends pages

SEPA provided the bulk of the data that underpinned the assessment of this indicator.