Narratives: Flooding and infrastructure, Resilience and resource use

The proportion of the entire rail network benefitting from fluvial flood protection (regardless of whether it is at flood risk or not) is0.24%.[1]

The proportion of the rail network which is at fluvial flood risk and that also benefits from fluvial flood protection is around 9% (1/11th)[2].

[1] The assessment of this indicator has been undertaken for 0.5% probability (1:200 year) flood events only

Transport supports many different social and economic functions. In 2013/14, 86.3 million passenger journeys were made by rail in Scotland - 16% of all public transport journeys.  Rail patronage has increased by 35% since 2004/05 and constitutes a growing share of public transport journeys.  In contrast, there has been a decline of 8.2% in the amount of freight (tonnes) lifted by rail between 2002/03 and 2012/13.  The modal share of freight (in tonne-km) carried by rail in Scotland in 2010 was 7% (Transport Scotland, 2014).

Flooding of rail infrastructure can cause disruption to rail transport with knock-on consequences for these functions – e.g. preventing or delaying people from reaching work, delaying rail freight. Climate change predictions suggest that flooding of rail infrastructure will become more extensive and more frequent. This indicator will provide insight into action taken to protect the rail network.

BT9 Disruption risk to railway services as a result of flooding

Figure 1 shows the location of all fluvial flood defence schemes, and the location of schemes that have been designed to an SOP of 200 years or more. Figure 2 shows the areas defended from fluvial flooding (where SOP is 200 years or more) as well as the sections of rail network that benefit.  Figure 2 also shows a close up for a small section of the urban rail network in southern Glasgow in proximity to Pollokshaws West, Thornliebank and Cathcart train stations. 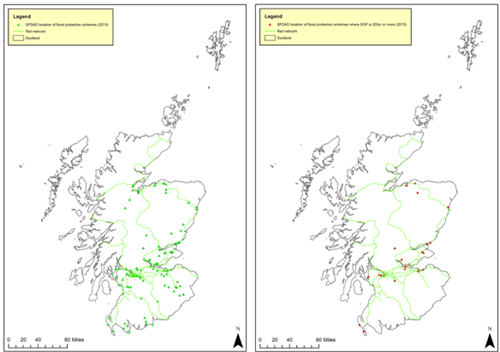 Figure 1  Location of flood defence schemes in Scotland: all schemes (LH map); Schemes designed to an SOP of 200 years or more (RH map)

This indicator is based on data from the SFDAD only (2015 data) and relates to protection from fluvial source flooding only. See Limitations section for further discussion. 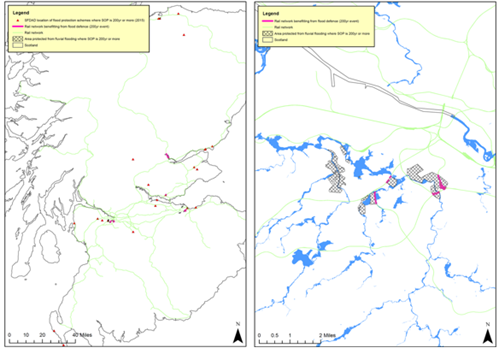 Note: The LH map shows the fluvial flood defence schemes with a SOP of 200 years or more. These focus on key population centres (Edinburgh and Glasgow) as well as strategic transport links (e.g. the Highland Main Line at Perth, A96 at Forres), reflecting the consequence element of risk. The RH map shows the defended area of the White Cart Flood Prevention Scheme (black hatch). This scheme protects the urban rail network in southern Glasgow close to Pollokshaws West, Thornliebank and Cathcart train stations (pink lines).

Network Rail’s Scotland Route Weather Resilience and Climate Change Adaptation Plans include a range of ongoing and proposed actions to help address flooding impacts to the rail network, including impacts that are expected to worsen or become more frequent as a result of climate change (Network Rail, 2014). This includes actions at specific sites to address known flooding issues as well as more general measures to reduce the vulnerability of the rail network to current and possible future flood risks including an asset strategy to upgrade small diameter culverts (e.g. on the West Highland Line) and various measures to make track assets more resilient to flooding (ibid).

The 2009 Flood Risk Management (Scotland) Act introduced a more sustainable approach to flood risk management (FRM) suited to the impacts of a changing climate (Scottish Government, 2015). In particular, the 2009 Act establishes a framework for coordination and cooperation between FRM stakeholders, helping to pave the way for catchment scale approaches including the use of natural flood management (e.g. restoring watercourses to a more natural form by reducing morphological pressures, planting vegetation and managing slopes to reduce runoff at source) to help restore more favourable runoff patterns and reduce flood risk (Scottish Government, 2011). Although there will always be a requirement for more traditional ‘hard engineered’ flood prevention schemes (e.g. embankments) in high risk areas, the 2009 Act establishes a statutory basis for considering wider catchment or land based approaches that may be more resilient in the face of climate change (ibid). In consequence, it may be the case that the location, scale and type of flood risk alleviation measures adopted in the future changes to reflect the 2009 Act’s more integrated, catchment scale approach. For example the use of land management measures in rural upper catchments could reduce the need for flood embankments in urban areas lower down the catchment.

The National Flood Risk Assessment (NFRA) carried out under the 2009 Act identifies a number of Potentially Vulnerable Areas (PVAs) across Scotland (SEPA, 2011). The PVAs highlight areas that are particularly vulnerable to flooding based on a range of different receptors as well as proxies for receptor value and vulnerability (SEPA, undated). In effect, the more receptors exposed to flooding (and the more valuable and vulnerable they are) the greater the overall risk, whereby risk is a function of event likelihood and consequence (Scottish Government, 2011). Transport (roads, railways and airports) are included as receptors in the NFRA (SEPA, undated). The PVAs are used to focus FRM effort to the locations where actions will deliver the greatest benefit by reducing overall flood risk. As a result, FRM action under the 2009 Act is likely to take a more strategic, targeted approach. Also, the criteria used in the NFRA (e.g. rurality provides a proxy for vulnerability) means that PVAs are spread variously around the country and not just concentrated on densely populated urban areas (though most PVAs do cluster around the central belt).

Thus it is anticipated that the type, scale, location and strategic targeting of flood prevention measures will change in the future, given the focus on risk based, catchment scale approaches. As the contents of the forthcoming Flood Risk Management Strategies (FRMS) and Local Flood Risk Management Plans (LFRMP) are not yet known it is not yet possible to determine how the rail network might benefit. However, given the nature of the PVA approach, it seems plausible that the proportion of the network benefitting from flood prevention measures will increase.

The design of flood prevention schemes is constantly being improved through the use of design flows or floods that account for climate change and through more detailed hydraulic models (Bassett et al, 2007). As a result, future schemes are likely to be better designed to cope with the demands of climate change.

There are several key limitations to the assessment as summarised below:

[1] Both of which are important sources of flooding to the rail network (Network Rail, 2014)

ClimateXChange (2016) Adaptation to Climate Change: Context and Overview for Transport Infrastructure Indicators. Available online at our Indicators and trends pages

SEPA and Network Rail provided the bulk of the data underpinning this assessment (SFDAD polygons and rail network polyline respectively).