BE5 Electricity substations located in areas at flood risk

Narratives: Flooding and infrastructure, Climate change risks to society and our capacity to adapt

Energy security requires a complex system to generate, store, and distribute energy. Physical infrastructure may be vulnerable to the impacts of climate change because of the potential for flooding, damage to power lines and disruption to power stations (The Scottish Government, 2011). In common with most countries, Scotland’s energy capacity has evolved as a primarily centralised network, which means that it is dependent on a relatively inflexible system of critical infrastructural assets (The Scottish Government, 2011).

Substations are critical to transmitting and distributing energy across the electricity network. Flooding coupled with the loss of power can have a severe effect on communities, particularly if other critical infrastructure services are also affected (eg water supply, sewage treatment and land drainage), and may require mass evacuation. Loss of other services that depend on electrical power, such as the emergency services and public communications (e.g. TV, internet, telephony), can also have a large impact on society (ENA, 2009) causing fear and distress to those affected (Pitt, 2008).

Repairing substation equipment damaged by floods may take weeks, and where replacement is required the disruption may last for months (ENA, 2009).  Monitoring substations at flood risk can help inform emergency planning for weather related hazards, such as flooding, and reduce disruption to local communities and businesses (Adaptation Sub-Committee (ASC), 2014).

BE6 Customers reliant on electricity substations in areas at flood risk

As of 2012-2013, 49 major substations (defined as primary or grid substations) were identified as being located in flood risk areas. As shown in Table 1, six are part of the transmission network (used to transport electricity at high voltages from generation units to distribution companies) while 43 form part of the electricity distribution network (which delivers electricity to most customers through lower voltage networks).

Table 1  Substations at Risk of Flooding

A task group formed to review the resilience of electricity substations to flooding has developed agreed standards for the resilience of electricity substations.  The group has representation from the ENA (Energy Networks Association), member companies, the Department for Business, Enterprise and Regulatory Reform (BERR), Ofgem, the Environment Agency (EA) and the Scottish Environmental Protection Agency (SEPA). Technical report ETR 138 (ENA, 2009) provides details of these standards. As part of this process, a consistent ‘Data Collection Specification’ was created in order to identify key flood risk information for each substation (ENA, 2009).

The Distribution Network Operators (DNOs) are required to report flood risk and mitigation measures for substations to Ofgem using the methodology set out by the Technical Report ETR 138. This reporting provides data that is fed into the ‘V7 Reports’ (ENA, 2015) that have been used for this indicator.  This reporting regime will continue to provide useful information in the future.

In Scotland, the data collected include an assessment of:

This forms part of the process to assess the resilience of substations located in flood risk areas across Scotland. The ETR 138 (ENA, 2009) agreed standards are also applied to assess proposed substation sites so that new substations will not be located in areas at risk of flooding unless there are no viable alternatives. This will reduce the future vulnerability of the electricity network.

Severe flooding incidents occurred in England during 2005 (Carlisle) and 2007 (South Midlands & Yorkshire) highlighting that electricity substations across the UK were potentially vulnerable to flooding. These events called into question whether historic levels of flood protection would be sufficient to protect UK substations in the longer term given the projected effects of climate change (ENA, 2009).  However, due mainly to differences in topography, Scotland has not experienced the same level of river and coastal flooding as England so the increase in risk to its substations may be less severe than further south in the UK.

The predicted changes in sea level and frequency of severe weather events are expected to ‘increase the severity and frequency of natural hazard threats to critical energy infrastructure, including exposure to flooding, extreme temperatures, and subsidence’ (The Scottish Government, 2011). This is likely to increase the number of substations located in areas at risk of flooding.

However, the implementation of new guidelines on the security of primary and grid substations (ETR138) will ensure that the flood resilience of existing major substations is increased (ENA, 2009). Additionally, future developments will not be located in areas at high risk of flooding. Therefore, it is predicted that while flood risk may increase, the implementation of ETR 138 will ensure that the vulnerability of the electricity network will not.

The current lack of historical data does not allow for identification of trends.

A figure for the total number of substations in Scotland is not yet available. The authors are seeking clarification from the two power distribution companies so that numbers can be put into context.

The exercise to identify major substations at risk of flooding only reflects risks posed by fluvial and coastal flooding, because at the time of the assessment these were the only risks about which SEPA provided data (ENA, 2009).  Thus the number of major substations at risk from all types of flooding may be higher when pluvial flooding is also considered. The latest iteration of the SEPA flood maps (SEPA, 2015) includes pluvial flooding, and it is proposed that the indicator should be developed as information about additional sources of flooding becomes available.

There are difficulties in interpretation of the data. Firstly, it is unclear whether the data contains details of all of the major substations located in flood risk areas, or just those where action is being taken.  Secondly, the information supplied by one of the operators only contains details of major substations that are part of the distribution network, while the other operator also supplied information about those that are part of the transmission network. The authors have been unable to confirm whether this is because in one of the operator areas, none of the major transmission substations are located in areas at risk of flooding, or if this is missing data. If the latter, the numbers reported here may be an underestimation.

This indicator was produced by Ailsa Strathie, Lynne Jack and colleagues at Heriot-Watt University with input from Darcy Pimblett (CXC) and Katherine Beckmann (Heriot Watt and CXC). 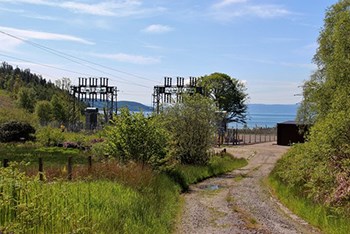