BE4/14 Electricity supply disruption due to flooding

The number of incidents and related Customer Minutes Lost (CML) vary considerably across years. This makes it unrealistic to interpret data over a short time span, as a single large flood event can have a very marked impact.

Energy security depends on a complex system to generate, store, and distribute energy. Physical infrastructure may be impacted by climate change due to the potential for flooding of facilities, damage to power lines and disruption to power stations (The Scottish Government, 2011). Scotland’s energy capacity has evolved as a primarily centralised network, which makes it dependent on a relatively inflexible system of critical infrastructural assets (The Scottish Government, 2011).

Loss of electricity causes disruption and inconvenience and can have a significant impact on the wellbeing of consumers (ENA, 2009). It was noted in the Pitt Review (Pitt, 2008) that when a community is already suffering the negative effects of flooding, the difficulties caused by disruption to the electricity network can add to the distress.

The rising sea levels and more frequent extreme weather predicted with climate change will increase flood risk in Scotland (The Scottish Government, 2015).  This indicator measures the resilience of the energy network to flooding and of the impact that flood events may have on energy supply.

Disruption to the electricity supply is assessed via two metrics. Customer Interruptions (CI) and Customer Minutes Lost (CML). CI represents the ‘number of customers whose supplies have been interrupted per 100 customers each year, where an interruption to supply lasts for three minutes or longer, excluding re-interruptions’ (Ofgem, 2012, p 21). CML is a measure of ‘the duration of interruptions to supply each year, measured by the average customer minutes lost per customer, where an interruption of supply to the customer lasts three minutes or longer’ (Ofgem, 2012, p 21).

The metrics CI and CML are provided for each part of the electricity distribution system:

CI and CML are lagging indicators of network investment, in that changes in these two metrics are likely to reflect earlier changes in the level of investment. Where a network is maintained in good condition, there will be fewer and shorter interruptions.

BE5  Major electricity substations located in areas at flood risk

BE6  Customers reliant on electricity substations in areas at flood risk

In 2016 there were 12 interruptions to the electricity supply due to flooding incidents, resulting in 76,096 CML. All these incidents were on the LV distribution network (Table 1). The total number of CI from all sources in 2016 was 1,693,618 and the combined total for CML was 101,553,296.   Flooding is thus a very minor factor in supply interruption, accounting for just 0.03% of all CI and just 0.07% of the annual CML in 2016. Disruption from other forms of severe weather is much more significant (see indicator BE15).

Table 1 Incidents and Customer Minutes Lost due to flooding by distribution system, 2016

Electricity distribution network operators (DNOs) are responsible for providing the network that transports electricity from the transmission system to consumers. There are two licenced DNOs in Scotland. Ofgem sets price controls to define the revenues that each DNO may recover from its customers, and also puts incentives in place to promote innovation, efficiency, and the provision of adequate network capacity, security, reliability and quality of service.

Flooding poses a threat to the power supply and can result in customer interruptions. Ofgem allocate DNOs an allowance for safety related activities, such as flood defence, in order to ensure that networks are being maintained (Ofgem, 2012).

Figure 1 shows disruption to the electricity supply caused by flooding for each year between 1995 and 2016, for HV and LV distribution networks and the total for both. Only one interruption occurred on the transmission network (KV) during this period, in 2015. However, this incident did not result in the loss of supply to customers (CML). The number of incidents varied widely across this period, with the lowest number of reported incidents in 1996 (10), and the highest number in 2015 (73).  The number of interruptions is generally higher for low voltage networks than for high voltage networks, with a notable exception in 2015. 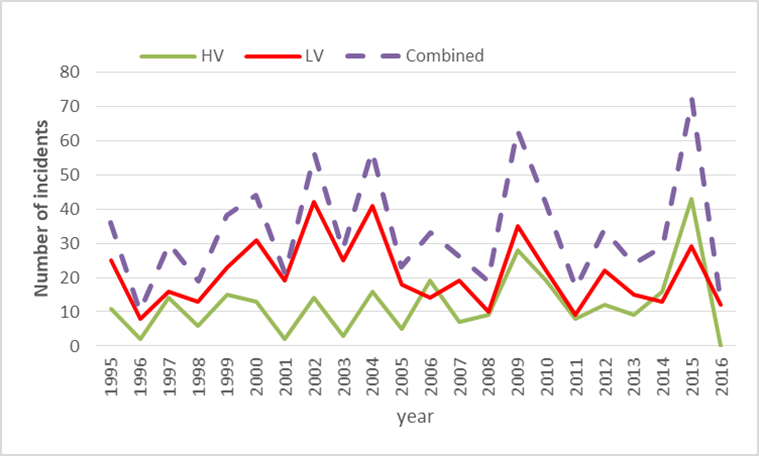 Figure 1 Number of interruptions to the electricity supply caused by flooding, 1995-2016

Figure 2 shows the number of CML due to disruption caused by flooding for each year between 1995 and 2016 for HV, LV, and the total for both combined. Between 1995 and 2007 the total number of CML varies quite markedly, followed by several years with more stable, relatively low levels of CML. However, in 2015 unprecedented (for this period) levels of disruption were experienced, largely as a result of interruptions to the HV supply. Analysis of individual events in 2015 shows that 85% of the CML due to flooding (2,652,051 customer minutes out of the annual total of 3,101,959 customer minutes) occurred in December 2015 and January 2016.

The number of customer minutes lost is generally higher for HV networks than for LV networks. This suggests that although interruptions are more frequent on the LV networks, interruptions on the HV network have a greater impact on customers. 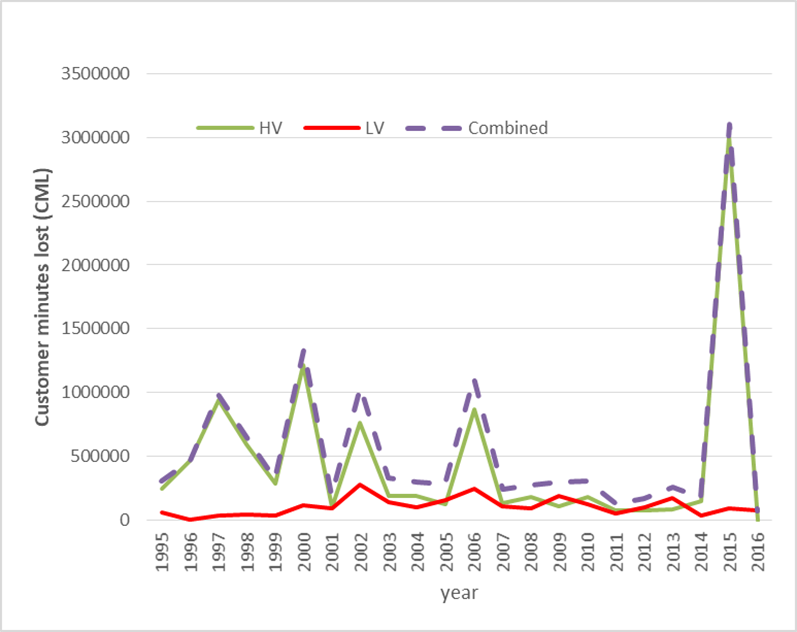 Figure 2 Customer minutes lost as a result of interruptions to supply caused by flooding, 1995-2016

Regulatory Approach
In October 2010, Ofgem introduced a new approach to network regulation, RIIO (Revenue = Incentives+Innovation+Outputs). RIIO provides a framework for setting price controls, designed to ensure that the investment needed to deliver a reliable and secure network is delivered at a fair price to customers. Scottish Power Transmission and Scottish Hydro Electricity Transmission (SSE) had their price controls finalised in April 2012, earmarking around £7 billion of investment for Scotland’s high voltage network to replace ageing infrastructure and enabling connections to renewable generators (Ofgem, 2013).

Climate change will increase the risk of flooding, potentially affecting energy supply security. A UK-wide event-based analysis has been conducted for flooding. In the year 2080, for all events considered, projections show a mean increase in the exceedance of rainfall amounts which have caused significant flooding events in the baseline period. However, Ofgem have increased the incentives for DNOs to reduce interruptions to supply, and to invest in upgrading critical infrastructure and increasing flood protection (Ofgem, 2013). This should help mitigate against by climate risks, and as a result there may not be an increase in either interruptions or CML.

Regulatory Approach
The RIIO-ED1 price control framework for provision of lower voltage electricity to homes and businesses runs from 2015 until 2023. During its first 2 years of operation, at a UK level there have been significant improvements in network reliability; although the second year saw a slight decrease in performance attributed to poor weather and storms (Ofgem, 2017). In addition, measures to increase the flood resilience of the electricity network by building additional defences at substations should decrease the number of interruptions from flooding (ENA, 2009). Changes to flood protection levels are monitored in indicators BE7 and BE8.

The number of incidents and related CML vary considerably across the years, which, given the irregular occurrence of flood events is not surprising. This makes it unrealistic to interpret data over a short time span, as a single large flood event can have a marked impact.  Since April 2005, Ofgem’s revised incentive scheme provides financial incentives to DNOs that meet their targets in terms of the number and duration of disruptions (British Power International / Mott McDonald, 2011). This may have contributed to the relatively low level of CML recorded between 2007 and 2014. Similarly, as additional flood protection measures are installed in substations at risk of flooding (Indicator BE8) the electricity network’s vulnerability to flooding should reduce.

Flooding is a very minor source of interruption compared to factors such as wind, gales, snow and lightning (see BE15).

Due to the high variability in annual flood events, monitoring of CML alone may not be enough to assess the efficacy of adaptation measures. In addition, the information in the National Fault and Interruption Reporting Scheme (NaFIRS) database only gives the immediate cause of interruptions. It does not provide contextual information, for example, about loss of other community services that depend on electricity.

The data used in this indicator is from the National Fault and Interruption Reporting Scheme (NaFIRS) and was supplied by Brodie Rutz at the Energy Network Association (ENA).

The 2016 version of this indicator was compiled by Ailsa Strathie, Lynne Jack and colleagues at Heriot-Watt University with input from Katherine Beckmann and others at ClimateXChange.

The data was sourced from the National Fault and Interruption Reporting Scheme (NaFIRS) data supplied by the Energy Network Association.