Risk/opportunity:(from the Climate Change Risk Assessment for Scotland 2012):
BE13 Rainwater penetration; BE31 Increase in damp, mould and insect pests in buildings

The penetration of rainwater into buildings has long been a concern in Scotland, where the exposure to wind-driven rain ranges from ‘Moderate’ (some east coast areas) to ‘Very Severe’ along much of the west coast and Scottish Islands (categories are defined within British Standard number BS 8104: 1992).  Rainwater penetration can lead to internal dampness, increased condensation, mould and insect pests, all of which have implications for human wellbeing and health as well as for the building fabric itself. Penetrating damp is usually the result of a defect in the building fabric, such as damage to the walls or roof, water ingress due to damaged seals on doors or windows or damp as a result of leaking plumbing.

Rising damp is far less of a problem but is included here as any source of dampness will have implications for human health.   Rising damp is the result of defective or missing damp proof coursing leading to water leaching into the building fabric.

CRS58  Number of households falling below the SHQS Tolerable Standard

Dwellings not being free from rising or penetrating damp was the most common reason for being recorded as Below Tolerable Standards in the 2016 SHCS.

Traditionally constructed (or historic) buildings are particularly threatened by increased rainfall which causes water penetration into masonry, and can lead to an increased risk of dampness, condensation and mould growth and, at worst, structural collapse. Increased extremes of wetting and drying may also lead to accelerated decay of stonework and other traditional materials. Even changes in the distribution of pests and biogenic growth such as lichen can threaten the integrity of historic buildings (Historic Scotland, 2012).   Evidence from the Scottish House Conditions Survey (SHCS) indicates that traditionally constructed housing is poorly prepared for climate change, with 67% of pre-1919 buildings surveyed as being in a critical state of disrepair (SHCS, 2017).

Surveyed levels of damp and condensation showed a very significant drop between 1991/1996 and the start of annual surveying in 2002 (see Figure 1). Since then, there has not been a significant trend in either factor. 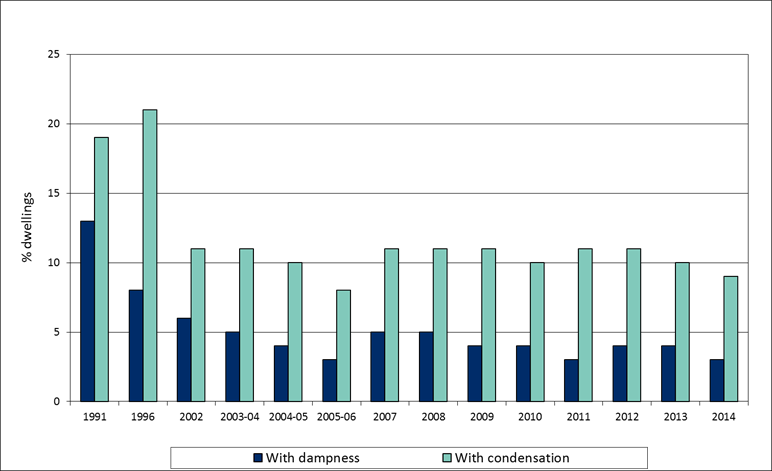 Dampness is one of the 55 criteria assessed in the Scottish Housing Quality Standard (SHQS).  Since 2015 all social landlords must ensure that all their dwellings pass the SHQS, so this will be acting as a significant driver to reduce levels of dampness in this sector (though private owners and private landlords are currently under no such obligation).

In anticipation of climate change effects, Scottish Government (2011) commissioned work to assess whether masonry walls constructed in accordance with the historical rainfall data and mapping in British Standard 8104, would still achieve the level of performance required by the Technical Standards for preventing precipitation penetrating to the inner face of buildings.  As a result of this research, an additional method of assessing wind driven rain has been introduced into Building Standards (see below).

Design guidance and standards are available in the Scottish Building Standards Technical Handbooks (Scottish Government, 2013).  Since October 2013 these have included both the (older) British Standard BS 8104: 1992 (which uses historic rainfall data from the 33 year period from 1959 to 1991), and the newer British Standard BS EN ISO 15927-3: 2009, which is based on the present weather code.  Both of these provide methodologies for the assessment of wind driven rain on the walls of a building.

Section 3.10 of the Domestic Handbook states the requirement for domestic buildings as follows:   “Every building must be designed and constructed in such a way that there will not be a threat to the building or the health of the occupants as a result of moisture from precipitation penetrating to the inner face of the building.”

Scottish Government (2013) also has plans in place for ‘Research to identify necessary resilience measures for buildings including ….

Levels of damp and condensation have remained largely similar over the past decade. It is not known if this will change over the next decade. Geographical differences in rainfall are anticipated.

Penetration of rainwater and penetrating damp is influenced by building fabric and design, the state of repair / disrepair and by the influence of regulations, as well as by climatic factors.  All these factors must be considered when interpreting any trend.

Condensation levels are noticeably affected by occupant behaviours (e.g. internal drying of laundry, bathroom usage, cooking, window usage) as well as ventilation features and rising and / or penetrating damp.  Again, all these factors must be considered when interpreting any trend.

The SHCS records a dwelling as having damp or condensation even when just a small area is affected, so this marker does not indicate a serious housing quality issue in all cases.

In addition, levels of dampness and condensation may vary depending on recent weather conditions, therefore measurement based on a single time point may not necessarily be representative of the extent of any problems.

Robust data is only available for dwellings and does not cover trends in dampness in the workplace and other commercial buildings.  Employers have a legal duty under the Health and Safety at Work Act 1974 to ensure a safe working environment. Issues with dampness should be addressed by this.

The SHCS is a sample survey. All survey figures are estimates of the true prevalence within the population and will contain some error associated with sampling variability.