Changes in built land use are increasing the area of impermeable land surfaces in Scotland. This has the potential to modify the runoff and the impact of flooding and weather events, as well as longer term hydrological routing. Surface water runoff has been identified as a significant contributing factor to flooding, the effects of which can be considerable where runoff from urban area is rapid and exceeds the drainage capacity of an area.

The UK Climate Projections (UKCP09) (Scottish Government, 2014) indicate that, broadly, the climate in Scotland will become warmer throughout the year, with hotter and drier summers and milder but wetter autumn and winters. It also notes that over the last 30 years rainfall has been increasing in Scotland, with more frequent concentrated rainfall events. These projections imply that water inputs will increase, leading to increased runoff.

The Surface Water Management Planning Guidance (Scottish Government, 2013) notes that the removal of vegetation and building over green space reduces infiltration and evapotranspiration, thereby increasing the volume and rate of surface water runoff in urban areas. However, prior to this work, there was no pre-existing quantitative estimate of the extent of impermeable surfaces available for Scotland, nor the rate of geographic distribution of change.

This indicator is for use in monitoring the changes in extent of impermeable surfaces at a local authority level. Download the indicator pdf for example photographs and maps. 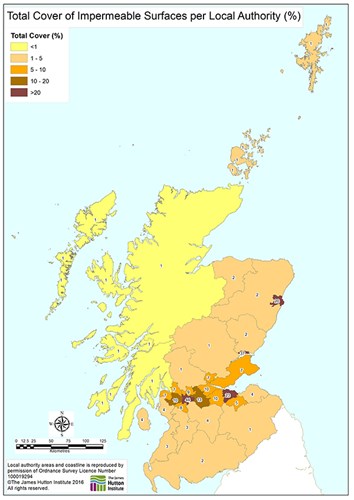 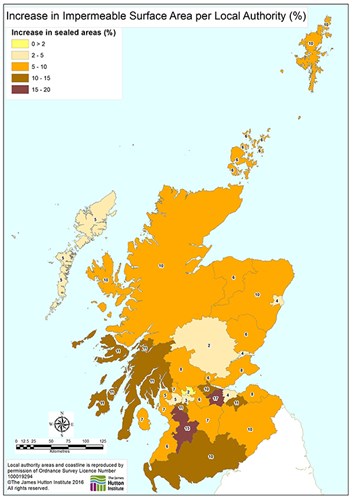 What is projected to happen in the future?
Patterns of change

Geographically, the areas of largest proportion of sealed land are the four main cities of Scotland (Glasgow, Edinburgh, Aberdeen and Dundee), and central Scotland, from Inverclyde on the west to Fife in the east. As a percentage of authority area, Highland and Argyll and Bute have the least sealed land.

There is no local authority with a reduction in the area of sealed land between 2008 and 2015. The local authorities with the greatest proportional increase in sealed land are West Lothian and East Ayrshire, followed by Midlothian, East Renfrewshire and Argyll and Bute.

The types of change with the largest impact on the reduction in the extent of impermeable surface are from previous industrial and commercial uses such as shipbuilding and other industries to a cleared and unsealed state (e.g. areas of former shipbuilding such as Clydebank, Annex 1(i); Greenock/Port Glasgow, Annex 1(ii)).

Although temporary, such a state may be for periods of 5 to 10 years awaiting specific plans or investment to come to fruition (e.g. Falkirk, Annex (iii)).

Large scale change in rural areas includes expansion of quarry operations, which are included in the calculation of impermeable surfaces for this indicator. This is the principal explanation for the proportionately large increase in sealed areas in East Ayrshire (e.g. Annex 1(vii)), parts of Argyll and Bute, and Midlothian.

Artificial surfaces introduced to rural areas are equestrian facilities (notably in South Ayrshire and Stirlingshire), and in urban areas it is sports fields at educational facilities. The effect on proportions sealed is dependent upon the design and technology used.

Within urban areas change is occurring at large and small scales. Notable amongst examples of small scale change is the sealing of front gardens for easier maintenance or for off-road parking (e.g. Annex 1(viii), South Ayrshire). In other developments the design of properties and communal or parking space is almost completely sealed (e.g. Annex 1(ix), or completely sealed (Annex(x)). Some change within urban areas leads to changes in the spatial arrangement of sealed and unsealed areas, but not necessarily the overall extent (e.g. Union Square development, Aberdeen).

In peri-urban areas, developments of residential properties on greenfield sites are increasing the area of sealed land, but the proportion is dependent on building design (e.g. extent of sealing at front and back of house, Annex 1(xi)). However, the extension of housing and associated transport infrastructure on greenfield sites explains a significant proportion of change in Aberdeenshire (e.g. towns of Westhill, Inverurie, Portlethen, Cove), and Falkirk (e.g. Mungal Farm). Other such significant developments are changes in use from public sector land uses to private or mixed ownership (e.g. Woodilee Hospital redeveloped as Woodilee Village), or new sites for research and development (e.g. Royal Dick School of Veterinary Studies, Midlothian; Annex 1(xii)).

Reductions in the percentage of area sealed are also apparent. These reductions are most notably in relation to the clearance of former housing and either the development of new properties with associated landscaping with a smaller extent of sealed land, or the site being vacant with development not yet commenced.

The indicator is not of changes in land use. Changes in land use provide the context for the land cover and associated permeability. However, some changes may lead to the same land use but with different levels of permeability, or drainage infrastructure due to choice of design or materials (e.g. sports pitch of a grass or all-weather surface). Changes in land use may also reflect phases of strategic plans for development (e.g. Clyde Waterfront, Clydebank), or progressive development involving more than 1 company with associated planning gain (e.g. housing, school, other services).

The largest areal units of change in land cover are from sealed to unsealed, principally the clearing and remediation of a former industrial site (e.g. Ravenscraig steelworks). Such changes may be temporary, or for limited periods and may lead to permeable surfaces, from previously impermeable. This creates opportunities for introducing new features or forms of urban design leading to a net reduction in impermeable surface within the boundary of the previous land use.

The largest areal units of change to a sealed surface are to car parks associated with retail parks or public services (e.g. hospitals). All observed are changes from mixed land cover types, thus not 100% from permeable to impermeable surfaces. Some such parking areas have vegetation or other green features. There is no clear pattern of inclusion of such components, but opportunities to design in an increased proportion of permeable surfaces should exist. (Note: no information was used on the uptake of permeable ground surface materials).

The largest areas of change in land use are due to developments of residential properties. Observations across 9 local authorities showed that approximately 31% of a residential property is impermeable, although subject to detailed issues of design of development and individual properties. Such developments can have a complex granularity, with a range from 10% to 90% sealed area, varying depending upon the type of property (e.g. single property or terraced), size of garden, and design of driveway and access. This implies that design guidelines and regulations have the potential to make significant contributions to the outcome of developments in terms of net changes in the area of impermeable surfaces.

Other small scale changes occurring in rural areas are the development of infrastructure in farms (e.g. hardstanding for access and storage areas), leisure (e.g. equestrian facilities), and infrastructure for renewable energy developments.

(i)                  Inconsistencies of input data from Ordnance Survey across urban and rural areas with evidence of more frequent updating of information in urban areas.

(ii)                The minimum mapping unit of the data is that of the polygons mapped by Ordnance Survey and represented in MasterMap Topography Layer. For those units where change has been reported by Ordnance Survey (e.g. in the description of the unit or the surface type) a visual interpretation has been made of the percentage of the land which is sealed in 2015, and allocated as a single value for the entire polygon. Therefore, this does not record the spatial distribution of sealed and unsealed features within the polygon. This may be significant if the data are overlaid on another dataset and assumptions about the distribution of the area sealed are not taken into account in subsequent interpretations.

(iii)               Explanations for anomalies in the output are predominantly related to the changes in classification of features by the Ordnance Survey between 2008 and 2015. Examples include attributes of roads which were ‘Unclassified’ in 2008 and are now recorded as a sealed surface (e.g. internal roads at Bonded Warehouse). Checks were made on some features (e.g. internal surfaces of warehouse access, noting specific details in the OS MasterMap records, such as reclassifying the type to ‘Unclassified’ on 20/05/2007; and then to manmade after release of the data for 2008 for use in this indicator).

(iv)              Changes in coding of features in urban (e.g. garden associated with flats) and rural areas by Ordnance Survey (e.g. natural to multiple) with no evidence of a change in land cover.

(ii)                Areas of aerial photographs which are obscured by shadows cast by buildings or other features, and for which there were no other sources of information (e.g. views ground level views from Google StreetView, or oblique views on Bing ‘Birds eye view’)

Accuracy and consistency of coding by Ordnance Survey of Natural and Manmade surfaces in local authorities for which all change polygons were unchecked.

A summary of the information underlying this indicator can be made available in tabular form for all local authorities. Spatial data derived for development of the indicator can be made available for certain local authorities where polygon level observations were made. For further information please contact James Hutton Institute, David Miller (David.Miller@hutton.ac.uk) or Margaret McKeen (Margaret.McKeen@hutton.ac.uk).

Ordnance Survey for use of MasterMap Topography Layer and Boundary Line data under Ordnance Survey Licence Number 1000019294; GetMapping (under the One Scotland Mapping Agreement), Google, Bing for use of aerial photography, and local authorities for use of the online maps and associated information relating to planning proposals.

For supporting information a variety of sources of information was used to inform interpretation of the nature of the change in land use and guidance on the types of surfaces in 2015.