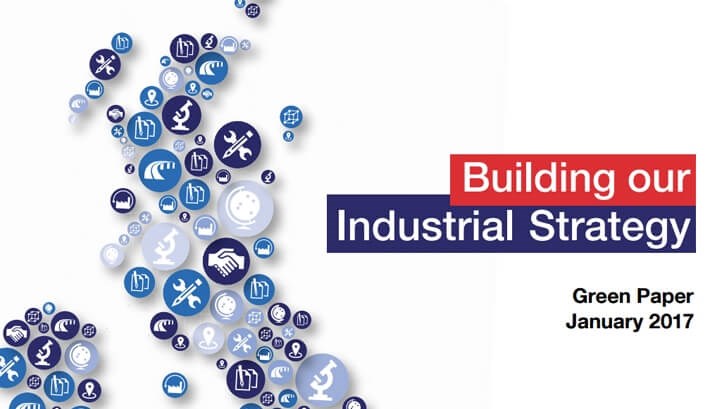 A commentary on the UK Government’s Industrial Strategy Green Paper

By Dr Mark Winskel, Chancellor’s Research Fellow on Energy Innovation in the School of Social and Political Science at Edinburgh University

The energy sector presents a particular setting for the working-out of the UK Government’s new industrial strategy. Unlike some other sectors, energy has seen multiple public policy initiatives since the return of energy policy on a significant scale at the end of the last decade. The key public policy driver in the late-2000s was recognition that any serious response to climate change must involve the long term decarbonisation of the energy system. The key UK institutional and policy architecture was introduced at this time: the Climate Change Act, the Committee on Climate Change and the Department for Energy and Climate Change (DECC).

In 2016 DECC was disbanded and merged with the Department of Business, Energy and Industrial Strategy (BEIS), and the Industrial Strategy (IS) green paper (BEIS, 2017) is perhaps the first high-level statement on the new department’s strategic priorities on energy – though a more detailed statement, the Emissions Reduction Plan (now being retitled as the Clean Growth Plan), is now due for publication and consultation.

The green paper hints at a revised approach to energy policy. It suggests that the ‘energy trilemma’ (the established characterisation of energy policy as a reconciling of decarbonisation, energy affordability and security concerns) is in need of an update, with a ‘higher priority’ given to affordability and industrial growth – i.e. reducing the costs of decarbonisation while increasing the (industrial) benefits. The Government also pledges further spending increases on energy innovation, and re-affirms a commitment to using competitive markets to deliver energy system change.

These are understandable and legitimate policy goals, but as a number of observers have recognised, their pursuit involves a number of tensions and concerns, including the need to align the industrial strategy agenda with overall energy and climate change policy goals, the need for evidence-based and transparent policymaking, and striking a balance between stable high-level commitments with flexible delivery in the light of changing evidence and circumstances.

In its recent report on the Industrial Strategy, the House of Commons BEIS Select Committee (EISC, 2016) criticised the Government’s emphasis on ‘picking winners’ through sector-specific initiatives and deals (including a patchwork of regional devolution and investment deals), rather than an overarching ‘mission-oriented’ approach to societal problems such as climate change. The Committee suggested ‘there is a real risk that certain proposals benefit incumbents … the green paper has little discussion of the implicit biases and conflicting demands that exist in policy making … it provides a long list of policy interventions but little by way of ground rules to provide a framework for future decision-making’ (p3).

The select committee also identified a danger of inconsistent targets and measures across different levels of government, as decentralisation and devolution present additional complexity and risks of a piecemeal approach. In Scotland there are particular concerns, given the Scottish Government’s new Energy Strategy and Climate Change Plan, which together set out a markedly different energy future than UK expectations, in terms of the direction and pace of change (Winskel, 2017).

There are a number of more specific ‘live’ concerns in UK energy policymaking. The Committee on Climate Change and the UK Energy Research Centre have both highlighted specific failings in energy efficiency policy, the development of carbon capture and storage technology and the accommodation of lowest cost renewables such as onshore wind (CCC, 2016, UKERC, 2016). The green paper has rather different priorities: smart systems, electric vehicles, electrical storage technologies and hydrogen systems.

While all of these areas are attracting interest among UK energy stakeholders, and may become central strands of the long-term energy transition, they all offer uncertain benefits and costs. In the face of these uncertainties, the need is to develop a new industrial energy strategy as part of a holistic and evidence-based policy approach, spanning shorter term and more incremental measures as well as longer term prospects, and social and behavioural measures alongside technological innovation.

Compared to some others, recent UK governments have tended not to offer sustained commitment to industrial strategy, and the available evidence base is patchy and mixed. For example, on public policy, the ESRC’s What Works Centre for Local Economic Growth recently concluded that ‘policymakers should be cautious in using local-level innovation policy … we know little about how this feeds through to greater innovation, better firm performance or longer term economic growth at the local level … traditional local cluster programmes have a very poor success rate’ (ESRC, 2017). The need here is therefore to ‘make the evidence base’ as much as draw on existing evidence – by devising policies in ways that facilitate evaluation, with more systematic ex-post analysis (see also UKERC, 2016).

In a similar vein, the UK Committee of Public Accounts recently expressed concern about ‘a culture of optimism’ within DECC / BEIS energy policymaking, which ‘gave a completely misleading picture … to Parliament and other stakeholders’ (CPA, 2017). It argued the need to foster openness and transparency and do more to demonstrate value for money for consumers. This carries messages for the industrial strategy, given the Government’s intention to spend more on energy innovation, and focus spending on specific areas. While there is some encouraging emerging evidence (in terms of the potential, for example, for smart networks to assist the energy transition) the evidence is still tentative and often based on modelling simulations and small local trials rather than larger-scale demonstrations and deployments (for example, the National Infrastructure Commission’s estimate of £3-8bn savings from smarter electricity networks is based on modelling simulations (NIC, 2016)). This suggests caution in the light of recognised energy system modelling limitations and the need to combine modelling evidence with ‘off model’ experience and expertise (e.g. Winskel, 2016).

Industrial energy strategy attracted some interest a decade ago in the wake of the Climate Change Act: the UK Government published a Low Carbon Industrial Strategy in 2009 as part of a wider Transition Plan. Some of the concerns expressed about this earlier initiative apply also to the current green paper, such as an emphasis on technology- and sector-specifics rather than societal challenges, and a lack of embedding in the available and emerging evidence base. There were many energy innovation initiatives in the years since the 2009 energy industrial strategy (e.g. the Research Councils’ Energy Programme, the Carbon Trust, Energy Technologies Institute, Innovate UK’s Energy Catapults, the Low Carbon Innovation Co-ordination Group), and there is considerable opportunity to learn lessons from these experiences (Winskel et al., 2014; UKERC, 2016).

The move to embed energy innovation and energy policy within an overall industrial strategy offers a number of opportunities. However, it also risks subverting the broad public interest to sectoral and technological specifics. A key challenge for government is to work with and support industry interests, while also drawing on independent evidence and expertise in policymaking for the wider public good.

Note: Dr Winskel conducts research on UK energy pathways as part of the UK Energy Research Centre (UKERC). He has extensive experience of conducting and managing interdisciplinary whole energy systems research. He also carries out research for ClimateXChange, and is a CXC co-Director. He writes here in a personal capacity.